Five international-class speed skaters (three men and two women, mean age—22.8 ± 1.6 years) who represented Japan in the 2007/2008 competition season participated in this study. Of the eight speed skaters initially recruited for the measurements in JSDC, five speed skaters who could eventually compete in WSDC were included in the study. Before the investigation began, all of the skaters provided written informed consent to participate in the study. The study was reviewed and approved by the Tokyo University of Agriculture and Technology Ethics Committee (No.200603-0218) and conducted in accordance with the Declaration of Helsinki.
During the approximately five-month season, the skaters raced in eight international and two domestic competitions, which corresponds to one competition every two weeks in different countries (Figure 1). All of the skaters were ranked within the top 20 in the World Cup standings for the 2007/2008 season, and subsequently participated in the 2010 Vancouver Olympic Games.
In both the JSDC (October 2007) and the WSDC (March 2008), the skaters competed in multiple races. In both competitions, the first race for the four short-distance skaters was a 500-m race, and that for the one middle/long distance skater was a 1500-m race.

Subjective fatigue was measured using a 100-mm visual analog scale. The skaters were asked to rate their degrees of fatigue along a 100-mm line between 0 (no fatigue) and 100 (maximum fatigue) [14].

Following a rest period of at least 1 min, the beat-to-beat heart rate (HR) of each skater was recorded in the seated position for 5 min using a Polar S810 heart rate monitor (Polar Electro Oy, Kempele, Finland) under controlled breathing of 15 breaths per minute [15]. Data processing was performed using Kubios HRV analysis software (Kubios HRV Standard, version 3.0.2., Kubios, Kuopio, Finland) [4,16]. For the time domain HRV indices, we obtained the standard deviation of all R-R intervals (SDNN) and the square root of the mean squared differences of successive R-R intervals (RMSSD). SDNN represents both the parasympathetic and sympathetic activity, whereas RMSSD represents parasympathetic cardiac modulation [4,5]. For the frequency domain HRV indices, we obtained the absolute power of the low-frequency (LF: 0.04–0.15 Hz) and high-frequency (HF: 0.15–0.40 Hz) band components. In addition, the normalized unit of HF (HFnu: HF/(LF + HF) × 100) and the LF/HF ratio were analyzed. HF reflects parasympathetic activity [17], and HFnu and the LF/HF ratio are used to evaluate the autonomic nervous system balance [4,17].

Official race results were used to compare the skaters’ performances at the JSDC and WSDC. As the subjects competed in different events during the first race of each competition, individual race times in the WSDC were transformed to percentages of the race times in the JSDC, which allowed us to compare the race performances as a group for each competition.

Data are presented as median and interquartile range. For all variables, data collected for four days before the start of each competition were averaged and used for further analyses. The Shapiro-Wilk test was used to examine normal distributions for all variables. Due to the non-normal distribution of the data, as well as the small number of study participants, the Wilcoxon signed-rank test was used to determine significant differences between the JSDC and WSDC values for each variable. Effect size was determined by the coefficient r [18], interpreted as follows: an r value of 0.1 was small, 0.3 was moderate, 0.5 was large, 0.7 was very large and 0.9 was extremely large [19]. The relationships between the changes in HRV indices and the change in subjective fatigue from JSDC and WSDC were examined by Spearman’s rank rho (ρ) correlation coefficient. Differences were considered statistically significant when p < 0.05. The SPSS version 19 (IBM, Armonk, NY, USA) was used for all statistical analyses.

3.3. Correlation between Changes in Subjective Fatigue and Changes in HRV 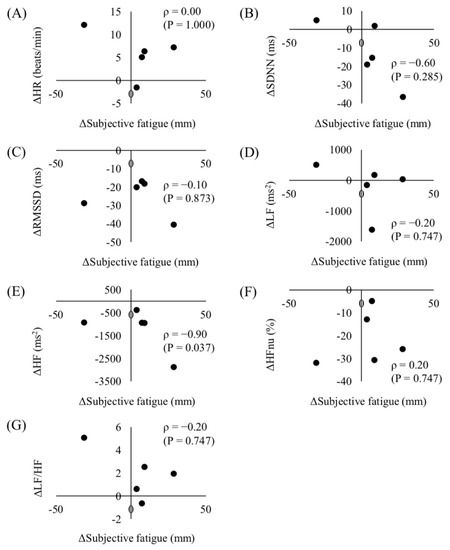 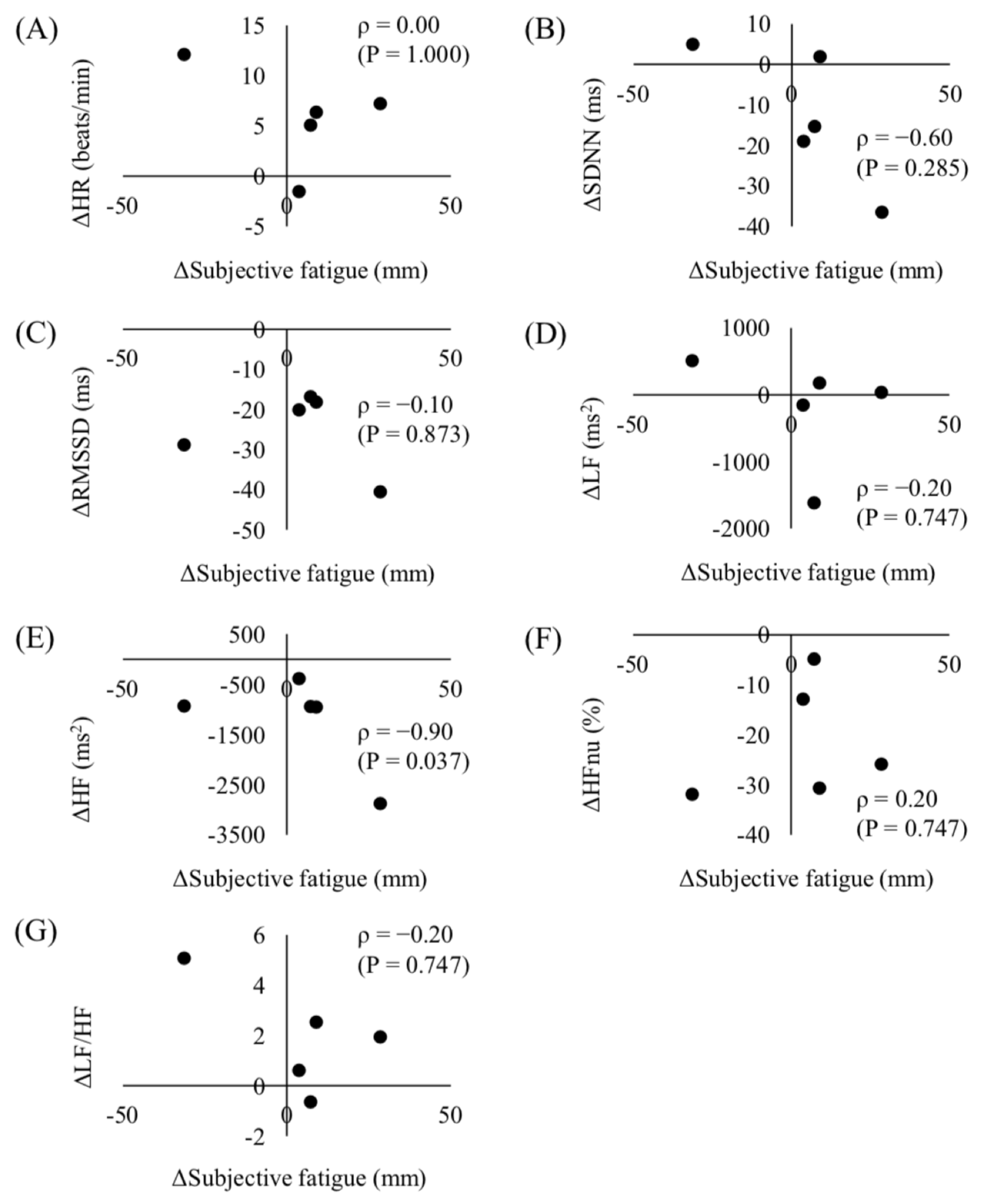