Submit to Arts Review for Arts 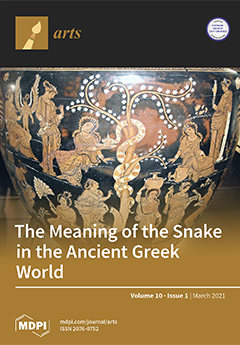 Cover Story (view full-size image): Part of a Special Issue on Animals on Ancient Material Culture, this article examines the symbolism of the snake in the ancient Greek world, with an emphasis on Archaic and Classical Athens. It argues that ancient Greeks perceived the existence of a special primordial force living within, emanating from, or symbolized by the snake; a force that is not more—and not less—than pure life, with all its paradoxes and complexities. The article emphasizes the importance of the snake as an excellent medium for accessing Greek ideas about the divine, anthropomorphism, and ancestry, the relationship between humans, nature, and the supernatural, and the negotiation of the inevitable dichotomy of old and new. View this paper
Previous Issue
Volume 9, December
Next Issue
Volume 10, June
We use cookies on our website to ensure you get the best experience. Read more about our cookies here.
Accept
We have just recently launched a new version of our website. Help us to further improve by taking part in this short 5 minute survey here. here.
Never show this again