Sourdoughs harbor simple microbial communities usually composed of a few prevailing lactic acid bacteria species (LAB) and yeast species. However, yeast and LAB found in sourdough have been described as highly diverse. Even if LAB and yeast associations have been widely documented, the nature of the interactions between them has been poorly described. These interactions define the composition and structure of sourdough communities, and therefore, the characteristics of the final bread product. In this study, the nature of the interactions between strains of two commonly found sourdough yeast species, Kazachstania humilis and Saccharomyces cerevisiae, and lactic acid bacteria isolated from sourdoughs has been analyzed. Population density analysis showed no evidence of positive interactions, but instead revealed neutral or negative asymmetric interaction outcomes. When in coculture, the yeasts´ population size decreased in the presence of LAB regardless of the strain, while the LAB´s population size was rarely influenced by the presence of yeasts. However, a higher maltose depletion was shown in maltose-negative K. humilis and maltose-positive obligately heterofermentative LAB cocultures compared to monocultures. In addition, tested pairs of obligately heterofermentative LAB and K. humilis strains leavened dough as much as couples of LAB and S. cerevisiae strains, while K. humilis strains never leavened dough as much as S. cerevisiae when in monoculture. Taken together, our results demonstrate that even if higher fermentation levels with increased maltose depletion were detected for K. humilis and obligately heterofermentative LAB pairs, these interactions cannot be ecologically classified as positive, leading us to rethink the established hypothesis of coexistence by facilitation in sourdoughs. View Full-Text
Keywords: Kazachstania humilis; Saccharomyces cerevisiae; Lactobacillus; sourdough; microbial interactions; bread Kazachstania humilis; Saccharomyces cerevisiae; Lactobacillus; sourdough; microbial interactions; bread
►▼ Show Figures 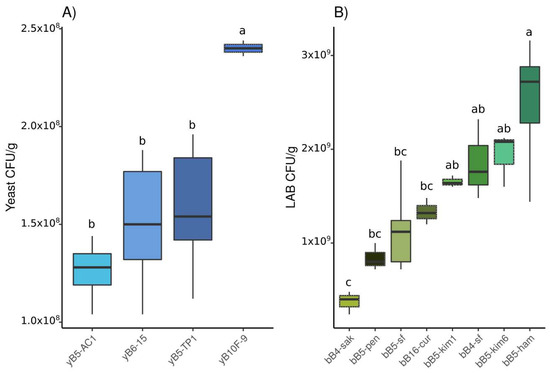