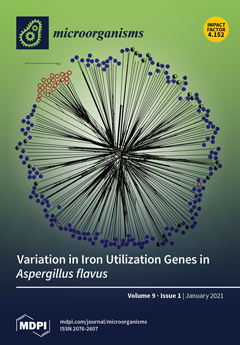 Cover Story (view full-size image): Microorganisms require iron to grow, develop, and produce metabolites. Genomic analyses of the aflatoxin-producing species Aspergillus flavus revealed both putative reductive and siderophore-mediated iron uptake and utilization pathways. Multiple indels that disable genes in the iron uptake cluster were detected, and in each case, conservation of indels suggests these mutations are fixed in clonal lineages. Climate change is expected to reduce iron concentrations in crop tissues, and this may cause differential abilities to utilize iron to impact competitiveness of aflatoxin producers during crop infection and, as a result, effectiveness of various atoxigenic A. flavus biocontrol genotypes. View this paper
Previous Issue
Volume 8, December
Next Issue
Volume 9, February
We use cookies on our website to ensure you get the best experience. Read more about our cookies here.
Accept
We have just recently launched a new version of our website. Help us to further improve by taking part in this short 5 minute survey here. here.
Never show this again