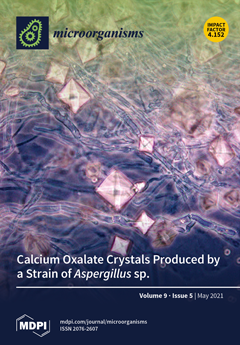 Cover Story (view full-size image): The study focused on the taxonomic and functional description of 50 fungal strains isolated from an active oxalate–carbonate pathway in Madagascar. Using various selective media, we characterized leaf-litter fungi encompassing three phyla and 23 genera; here, we found that many strains were able to produce siderophores and showed proteolytic, cellulolytic and xylanolytic activities. Several strains were also able to produce calcium oxalate crystals while others decomposed calcium oxalate. Altogether, these results strengthen the importance of the role of fungi in C, N, Ca, and Fe cycles.View this paper
Previous Issue
Volume 9, April
Next Issue
Volume 9, June
We use cookies on our website to ensure you get the best experience. Read more about our cookies here.
Accept
We have just recently launched a new version of our website. Help us to further improve by taking part in this short 5 minute survey here. here.
Never show this again