Cows Come Down from the Mountains before the (Mw = 6.1) Earthquake Colfiorito in September 1997; A Single Case Study
Next Article in Special Issue

Environmental and Anthropogenic Impacts on Avifaunal Assemblages in an Urban Parkland, 1976 to 2007

Hopping Down the Main Street: Eastern Grey Kangaroos at Home in an Urban Matrix

Eastern Grey Kangaroos (Macropus giganteus) occur throughout the seaside town of Anglesea in southern Victoria, Australia. We have tagged about half of these kangaroos in a longitudinal study of population dynamics and behavior. A golf course forms the nucleus of this population. Females live on and around the golf course, but males roam across the town in autumn and winter, living in bush reserves, empty blocks and back yards. Most females breed every year, but over half of their young disappear. Vehicles are the major cause of adult deaths, killing a much higher proportion of males than females.

Most urban mammals are small. However, one of the largest marsupials, the Eastern Grey Kangaroo Macropus giganteus, occurs in some urban areas. In 2007, we embarked on a longitudinal study of this species in the seaside town of Anglesea in southern Victoria, Australia. We have captured and tagged 360 individuals to date, fitting each adult with a collar displaying its name. We have monitored survival, reproduction and movements by resighting, recapture and radio-tracking, augmented by citizen science reports of collared individuals. Kangaroos occurred throughout the town, but the golf course formed the nucleus of this urban population. The course supported a high density of kangaroos (2–5/ha), and approximately half of them were tagged. Total counts of kangaroos on the golf course were highest in summer, at the peak of the mating season, and lowest in winter, when many males but not females left the course. Almost all tagged adult females were sedentary, using only part of the golf course and adjacent native vegetation and residential blocks. In contrast, during the non-mating season (autumn and winter), many tagged adult males ranged widely across the town in a mix of native vegetation remnants, recreation reserves, vacant blocks, commercial properties and residential gardens. Annual fecundity of tagged females was generally high (≥70%), but survival of tagged juveniles was low (54%). We could not determine the cause of death of most juveniles. Vehicles were the major (47%) cause of mortality of tagged adults. Road-kills were concentrated (74%) in autumn and winter, and were heavily male biased: half of all tagged males died on roads compared with only 20% of tagged females. We predict that this novel and potent mortality factor will have profound, long-term impacts on the demography and behavior of the urban kangaroo population at Anglesea. View Full-Text
Keywords: Eastern Grey Kangaroo; citizen science; fecundity; habitat use; matrix-occupying; matrix sensitive; mortality; road-kill; sexual segregation; urban matrix Eastern Grey Kangaroo; citizen science; fecundity; habitat use; matrix-occupying; matrix sensitive; mortality; road-kill; sexual segregation; urban matrix
►▼ Show Figures 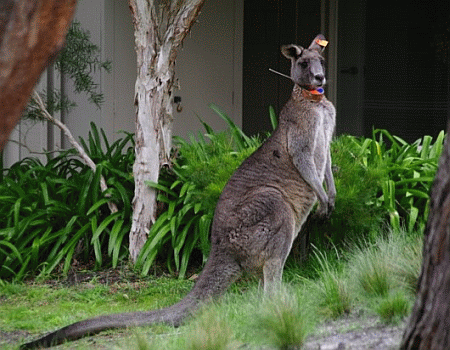