Implementing REDD+ in a Conflict-Affected Country: A Case Study of the Democratic Republic of Congo
Previous Article in Journal

Blockchain: The Evolutionary Next Step for ICT E-Agriculture
Previous Article in Special Issue

Are Protected Forests of Bangladesh Prepared for the Implementation of REDD+? A Forest Governance Analysis from Rema-Kalenga Wildlife Sanctuary

Hydrological Consequences of Timber Harvesting in Landscape Zones of Siberia

Despite a large number of publications covering various aspects of the influence of climatic factors on runoff, this direction in hydrological research acquires a new meaning in connection with global climate change and the increase in anthropogenic press on river systems. The authors of this work focused on the impact of anthropogenic factors on river runoff. Many rivers of Siberian taiga drain areas have experienced a dramatic land-cover change, with a decrease in overall forest area and a relative increase in deciduous trees. Land cover change in forest catchments impact water balance and accordingly, river flow. The study areas, the West Sayan and Northern Angara regions located in Central Siberia, are now a mosaic of forest regeneration sites including both post-human and post-fire regeneration patterns. Data of our own hydrological experiments conducted on clear cuts of different ages and reference materials for regular hydrological observations were analyzed. Dynamics of river flow under influence of timber harvesting were studied for 11 river basins in different landscape zones of Siberia. The studies showed that, in Siberia, forest cover changes lead to either reduction of, or increase in water yield depending on forest structure and climate. Dynamics of river flow after forest logging differ for continental and humid climates. Where precipitation is excessive, water yield increases twice that of control plots during the first several post-cutting years, due to reduction of transpiring phytomass. It takes 30–40 years and sometimes even over 50 years, depending on forest succession trajectories, for water yield to recover to the pre-cutting level. In an extremely continental climate, extensive forest cutting results in decreasing water yield during the first post-clearcutting years, because wind activity increases and enhances snow evaporation on vast clear cuts. Water yield exhibited an average annual decrease of 0.5–1.0 mm during the first two decades after cutting, i.e., until when clear cuts began to regenerate. With further development of forest vegetation, water yield increased by 1.5–3 mm annually. Obtained results show that at the regional level in conditions of anthropogenic press on the forests at the catchments of medium and small rivers, the climatic trends are offset by the felling and subsequent reforestation dynamics at clear cuts. View Full-Text
Keywords: Siberia; West Sayan; Angara River; timber harvesting; clear-cut; runoff; water balance Siberia; West Sayan; Angara River; timber harvesting; clear-cut; runoff; water balance
►▼ Show Figures 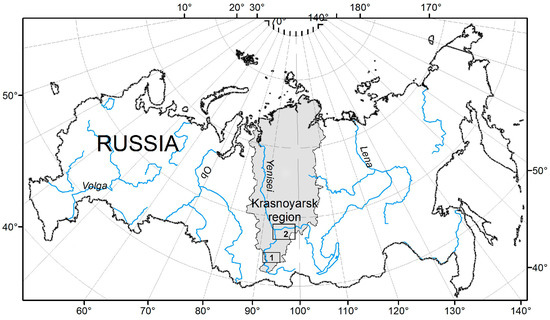