New Insights into Cellular Impacts of Metals in Aquatic Animals

The freshwater pearl mussel (FWPM) Margaritifera margaritifera (L.1758) is critically endangered in Europe and ecotoxicological studies on the species are scares. Here, 96 h acute toxicity tests were conducted at 16 °C with sodium chloride (NaCl), nitrates (NO3−), ortho-phosphates (PO43−), cadmium (Cd), aluminum (Al) and arsenic (As) on 13- to 28-month-old post-parasitic juveniles. The experimental protocol was developed according to conditions described in a standard guide and was modified in order to assess toxicity thresholds for the Dronne River. Results showed that juveniles were tolerant to concentrations of Al, Cd, As, PO43−, NO3− and NaCl, largely higher than those found in the Dronne river, since 96 h EC50s (effective concentrations) were >954 µg/L for Al; >110 µg/L for Cd; >127 µg/L for As; >5.01 mg/L for PO43−; between 1000 and 1500 mg/L for NO3− and were 1.19 and 1.33 g/L for NaCl. Moreover, the use of a substrate in experiments was found not to affect juvenile responses and younger juveniles seemed more sensitive than older individuals. This study thus provides new data about the tolerance of FWPM to environmental pollution and suggests that pollutant concentrations in the river are significantly lower than levels affecting them. View Full-Text
Keywords: juvenile freshwater pearl mussel; nutrients; metals; sensitivity; acute toxicity test juvenile freshwater pearl mussel; nutrients; metals; sensitivity; acute toxicity test
►▼ Show Figures 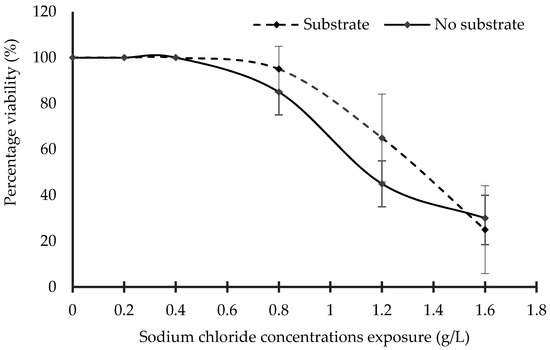