Little is known about the effect of nitrogen (N) application via biochar on the removal of trace elements by crops, and the effects with chemical fertilizers are inconsistent. We determined, from a previous study, the influence of increased N addition via biochars produced from switchgrass (SGB) and poultry litter (PLB) on cadmium (Cd) removal by ryegrass. The biochar rates of 0, 0.5, 1, 2, and 4% w/w were applied to a Cd-contaminated soil before seeding in a potting experiment with a complete randomized block design (CRBD). Ryegrass yield and N and Cd removed by harvest were strongly related (p < 0.05). The ryegrass yields increased up to 1% of PLB, and Cd removal was also the highest at 1% of PLB. The biomass of ryegrass roots increased with Cd accumulation (p < 0.05). Overall, the Cd transfer factor (TF) from ryegrass roots to shoots increased when up to 206 ± 38 kg N ha−1 was removed in ryegrass shoots (p < 0.0001). The application of PLB up to 1% might be a viable option since it is a practical rate for handling operations requiring less volume of material than SGB. Additionally, the Cd concentration in the aboveground forage remained acceptable for grazing cattle. Future studies are encouraged to evaluate different sources of N fertilizers affecting Cd uptake on cash crops. View Full-Text
Keywords: cadmium; biochar application rates; metal accumulation; nitrogen; ryegrass cadmium; biochar application rates; metal accumulation; nitrogen; ryegrass
►▼ Show Figures 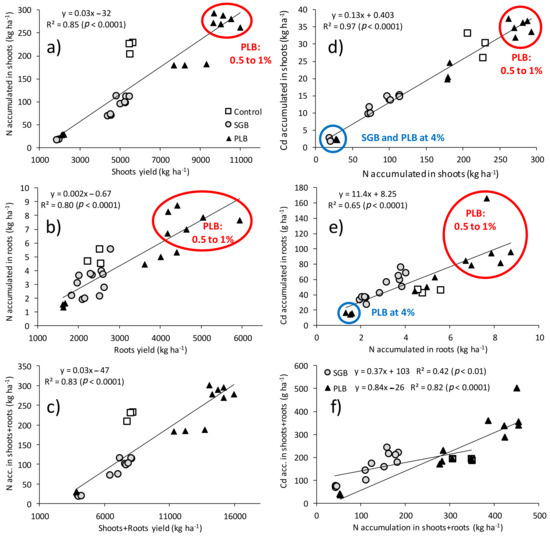