Applying Biodiversity Metrics as Surrogates to a Habitat Conservation Plan

Unabated urbanization has led to environmental degradation and subsequent biodiversity loss across the globe. As an outcome of unmitigated land use, multi-jurisdictional agencies have developed land use plans that attempt to protect threatened or endangered species across selected areas by which some trade-offs between harm to species and additional conservation approaches are allowed among the partnering organizations. Typical conservation plans can be created to focus on single or multiple species, and although they may protect a species or groups of species, they may not account for biodiversity or its protection across the given area. We applied an approach that clustered deductive habitat models for terrestrial vertebrates into metrics that serve as surrogates for biodiversity and relate to ecosystem services. In order to evaluate this process, we collaborated with the partnering agencies who are creating a Multi-Species Habitat Conservation Plan in southern California and compared it to the entire Mojave Desert Ecoregion. We focused on total terrestrial vertebrate species richness and taxon groupings representing amphibians, birds, mammals, and reptiles, and two special status species using the Normalized Index of Biodiversity (NIB). The conservation planning area had a lower NIB and was less species rich than the Mojave Desert Ecoregion, but the Mojave River riparian corridor had a higher NIB and was more species-rich, and while taxon analysis varied across the geographies, this pattern generally held. Additionally, we analyzed desert tortoise (Gopherus agassizii) and desert kit fox (Vulpes macrotis arsipus) as umbrella species and determined that both species are associated with increased NIB and large numbers of species for the conservation area. Our process provided the ability to incorporate value-added surrogate information into a formal land use planning process and used a metric, NIB, which allowed comparison of the various planning areas and geographic units. Although this process has been applied to Apple Valley, CA, and other geographies within the U.S., the approach has practical application for other global biodiversity initiatives. View Full-Text
Keywords: biodiversity; biodiversity metrics; ecosystem services; habitat conservation plan; desert tortoise; desert kit fox; umbrella species; Mojave Desert ecosystem biodiversity; biodiversity metrics; ecosystem services; habitat conservation plan; desert tortoise; desert kit fox; umbrella species; Mojave Desert ecosystem
►▼ Show Figures 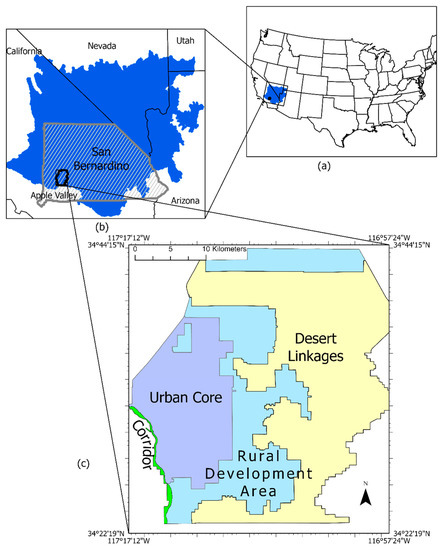