Oxytocin (OT) is a nonapeptide hormone that is secreted into the brain and blood circulation. OT has not only classical neurohormonal roles in uterine contraction and milk ejection during the reproductive phase in females, but has also been shown to have new pivotal neuromodulatory roles in social recognition and interaction in both genders. A single administration of OT through nasal spray increases mutual recognition and trust in healthy subjects and psychiatric patients, suggesting that OT is a potential therapeutic drug for autism spectrum disorders, schizophrenia, and some other psychiatric disorders. Although the mechanism is not well understood, it is likely that OT can be transported into the brain where it activates OT receptors to exert its function in the brain. However, the amount transported into the brain may be low. To ensure equivalent effects, an OT analog with long-lasting and effective blood-brain barrier penetration properties would be beneficial for use as a therapeutic drug. Here, we designed and synthesized a new oxytocin analog, lipo-oxytocin-1 (LOT-1), in which two palmitoyl groups are conjugated at the amino group of the cysteine9 residue and the phenolic hydroxyl group of the tyrosine8 residue of the OT molecule. To determine whether LOT-1 actually has an effect on the central nervous system, we examined its effects in a CD157 knockout model mouse of the non-motor psychiatric symptoms of Parkinson’s disease. Similar to OT, this analog rescued anxiety-like behavior and social avoidance in the open field test with the social target in a central arena 30 min after intraperitoneal injection in CD157 knockout mice. When examined 24 h after injection, the mice treated with LOT-1 displayed more recovery than those given OT. The results suggest that LOT-1 has a functional advantage in recovery of social behavioral impairment, such as those caused by neurodegenerative diseases, autism spectrum disorders, and schizophrenia. View Full-Text
Keywords: synthetic oxytocin; oxytocin analog; lipidation; social behavior; social avoidance; autism; Bst1; CD157 synthetic oxytocin; oxytocin analog; lipidation; social behavior; social avoidance; autism; Bst1; CD157
►▼ Show Figures 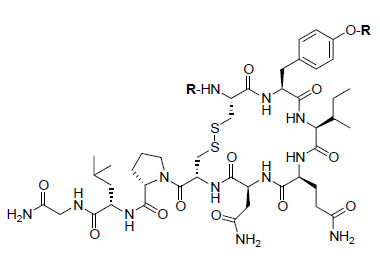