Assessment of EULAR/ACR-2019, SLICC-2012 and ACR-1997 Classification Criteria in SLE with Longstanding Disease
Next Article in Special Issue

Ambient air pollution impairs lung development in children, particularly in industrialized areas. The air quality in Zabrze, a city located in the Upper Silesian Industrial Region of Poland, is among the worst in Europe. We compared lung function and the frequency of respiratory or allergic symptoms between children living in Zabrze and those living in Gdynia, a city on the Baltic coast, which has the best long-term air quality in Poland. We enrolled children aged 9–15 years from both cities who were able to perform a spirometry. The following spirometry variables were measured for all participants: forced vital capacity (FVC), forced expiratory volume during the first second of expiration (FEV1), FEV1/FVC index, and peak expiratory flow (PEF). The frequencies of respiratory or allergic symptoms were taken from a survey completed by the participants’ parents. In total, 258 children from Gdynia and 512 children from Zabrze were examined. The mean values of FVC, FEV1, and PEF were significantly greater among children in Gdynia than those reported in Zabrze (p ≤ 0.032), and the frequencies of seasonal rhinorrhea (p = 0.015) or coughing episodes (p = 0.022) were significantly higher in Zabrze than in Gdynia. In conclusion, lung function was significantly impaired in children living in Zabrze, an area which is associated with poor air quality. Strategies to improve air quality in the Silesia region are urgently needed. View Full-Text
Keywords: air quality; air pollution; spirometry; lung function; children air quality; air pollution; spirometry; lung function; children
►▼ Show Figures 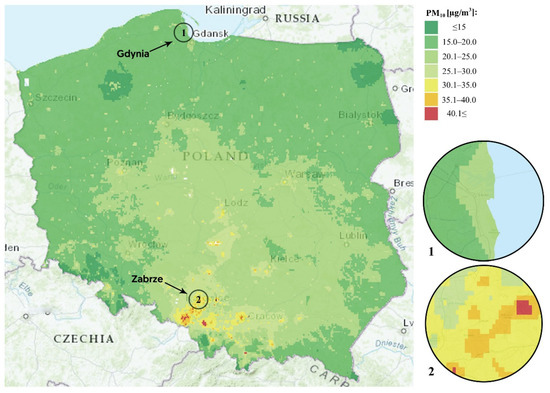 Piotr Dąbrowiecki
Graduated the Military Medical Academy in 1997, medical faculty. In 2002 he defended his doctoral dissertation in the field of allergology at the Medical University of Lodz. Internal medicine and allergology specialist. Member of the Main Board of the Polish Society of Allergology. Chairman of the Polish Federation of Asthma, Allergy and COPD Patients’ Associations. Since 1998, he has been conducting trainings for patients with asthma and COPD, and since 2000, he has also been educating doctors and nurses in the care of patients with asthma and chronic obstructive pulmonary disease. Since 2014, he has been educating pharmacists in the care of patients with allergies, asthma and COPD. Organizer of Polish Spirometry Days and co-organizer of the World Spirometry Days in Poland. Currently, he works at the Department of Infectious Diseases and Allergology at the Military Medical Institute in Warsaw, conducting research on the impact of air pollution on human health.

Artur Badyda
Doctor of science, associate professor and (since 2016) head of the Department of Informatics and Environment Quality Research of Warsaw University of Technology. His scientific interests are related to environmental determinants of health, health impact assessment, including influence of ambient air pollution on human health. Professional interests are focused on environmental protection management, air quality monitoring, energy efficiency, ecological education, environmental impact assessment and public consultation in the field large infrastructure and industrial investments. Former advisor to the Minister of Environment of the Republic of Poland.
Zoom | Orient | As Lines | As Sticks | As Cartoon | As Surface | Previous Scene | Next Scene
We use cookies on our website to ensure you get the best experience. Read more about our cookies here.
Accept
We have just recently launched a new version of our website. Help us to further improve by taking part in this short 5 minute survey here. here.
Never show this again