Omega-3 Fatty Acids in Modern Parenteral Nutrition: A Review of the Current Evidence

Background: Chronic kidney disease (CKD) is a potent risk factor for cardiovascular disease (CVD). CVD risk increases in a stepwise manner with increasing kidney impairment and is significantly reduced by kidney transplantation, suggesting a causal relationship. Dyslipidemia, a well recognised CVD risk factor, is highly prevalent in CKD. While dyslipidemia is a risk factor for CKD, kidney impairment can also induce a dyslipidemic state that may contribute to the excess burden of CVD in CKD. We utilised a multipronged approach to determine whether a causal relationship exists. Materials and Methods: Retrospective case-control analysis of 816 patients admitted to the Royal Hobart Hospital in 2008–2009 with different degrees of kidney impairment and retrospective before-after cohort analysis of 60 patients who received a transplanted kidney between 1999 and 2009. Results: Decreased estimated GFR (eGFR) was independently associated with decreased high density lipoprotein (HDL, p < 0.0001) and increased triglyceride concentrations (p < 0.01) in multivariate analysis. There was no significant relationship between eGFR and low density lipoprotein (LDL) or total cholesterol in multivariate analysis. Kidney transplantation increased HDL (p < 0.0001) and decreased triglyceride (p = 0.007) concentration, whereas there was no significant change in LDL and total cholesterol. These effects were dependent on maintenance of graft function, statin therapy (those who were on) if graft failure occurred then HDL again decreased and triglycerides increased. Conclusions: Kidney transplantation ameliorated alterations in plasma lipoprotein profile associated with kidney impairment, an effect that was dependent on the maintenance of graft function. These data suggest that kidney function is a determinant of HDL and triglyceride concentrations in patients with CKD. View Full-Text
Keywords: CKD; CVD; HDL; kidney transplantation; lipids; triglycerides CKD; CVD; HDL; kidney transplantation; lipids; triglycerides
►▼ Show Figures 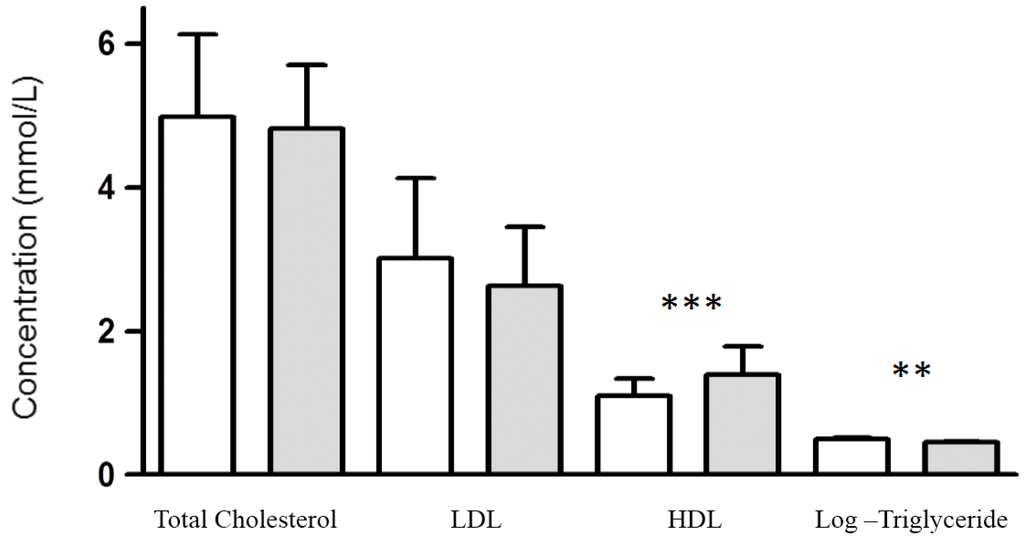