An Antithrombotic Strategy by Targeting Phospholipase D in Human Platelets

Platelets play a crucial role in normal haemostasis. When blood vessels are damaged, platelets are activated and form a platelet plug at the injury site to prevent blood loss. By contrast, they can also cause vessel occlusion under pathological conditions or with diseases such as inflammation and diabetes mellitus. To date, clinical antiplatelet drugs, such as aspirin and clopidogrel, have been commonly used to prevent secondary stroke but account for only a 20% reduction of all recurrent strokes [1]. For improved safety and efficacy, scientists have exerted considerable efforts to develop new antiplatelet drugs. For example, in 2014, the US Food and Drug Administration approved the thrombin receptor (protease-activated receptor 1) antagonist vorapaxar, a new category of antiplatelet drugs, for preventing secondary stroke. These novel antiplatelet drugs offer alternative therapeutic strategies for reducing recurrent stroke, depending on their mechanisms of antiplatelet activity.
Phospholipase D (PLD) is an enzyme that hydrolyzes phosphatidylcholine to generate choline and the second messenger signaling lipid phosphatidic acid (PA) in response to various stimuli, such as growth factors and neurotransmitters [2]. PLD has several isoforms, and PLD1 and PLD2 were proposed to be involved in many biological processes and diseases including cancer, immunity, and Alzheimer’s disease [2]. In human platelets, PLD mainly exhibits two isoforms, PLD1 and PLD2, which translocate to the plasma membrane during platelet activation and produce PA [3]. Moreover, PLD activity reportedly increases on stimulation with collagen and thrombin [3]. Several studies have investigated the role of PLD1 and PLD2 in platelet activation and thrombus formation using Pld1−/− and Pld2−/− mice [4,5]. Platelets from Pld1−/− mice reportedly exhibit impaired integrin αIIbβ3 activation and shear stress-induced thrombus formation but do not exhibit impaired granule release or platelet aggregation [4]. Furthermore, Thielmann et al. [5] found that PLD2 deletion did not affect agonist-induced integrin αIIbβ3 activation, granule release, and platelet aggregation. However, genetic deletion or pharmacological inhibition of both PLD1 and PLD2 synergistically blocked integrin αIIbβ3 activation and α-granule release but did not affect platelet aggregation [5,6]. In addition, pharmacological inhibition of PLD protects mice against occlusive thrombus formation and ischaemic stroke in the absence of major intracerebral haemorrhage or prolongation of bleeding time, suggesting that pharmacological PLD inhibition is a safe therapeutic strategy for preventing arterial thrombosis and ischaemic stroke [6].
Although evidence suggests that PLD is involved in thrombus formation in mice, its effects on human platelets remain unclear. In our preliminary results, we found that PLD1 or PLD2 inhibition using the selective pharmacological PLD1 inhibitor VU1, whose official code is VU0155069, and PLD2 inhibitor VU2, whose official code is VU0364739 [7,8], respectively, blocked human platelet aggregation and granule release, suggesting that the role of PLD in the platelet function may be different in humans and mice. Thus, in this study, the function and mechanism of PLD underlying human platelet activation were determined for the first time.

This study was approved by the Institutional Review Board of Shin Kong Wu Ho-Su Memorial Hospital (Approval No. 20160705R) and conformed to the principles outlined in the Declaration of Helsinki. All volunteers provided informed consent. Human platelet suspensions were prepared as previously described [9,10]. In brief, blood was collected from healthy volunteers, who had taken no medicine during the preceding two weeks, and mixed with an acid–citrate–dextrose solution (9:1, v/v). After centrifugation, the supernatant (platelet-rich plasma) was supplemented with prostaglandin E1 (0.5 μM) and heparin (6.4 IU/mL). Washed platelets were suspended in Tyrode’s solution containing bovine serum albumin (BSA; 3.5 mg/mL). The final concentration of Ca2+ in Tyrode’s solution was 1 mM.
Platelet aggregation was measured through turbidimetry [9,10] using a Lumi-Aggregometer (Payton, Scarborough, ON, Canada), and adenosine triphosphate (ATP) release was detected through the measurement of luminescence using the F-4500 spectrometer (Hitachi, Osaka, Japan). Platelet suspensions (3.6 × 108 cells/mL) were preincubated with various concentrations of VU1, VU2, or an isovolumetric solvent control (0.1% DMSO, final concentration) for 3 min before the addition of agonists. The reaction was allowed to proceed for 6 min.

The flow cytometry experiment was performed as described previously [11]. In brief, the platelet suspensions (1 × 106 platelets/mL) were preincubated with VU1, VU2, or 0.1% DMSO for 3 min, and subsequently, thrombin (0.01 U/mL) was added for 6 min in glass cuvettes at 37 °C. After the reactions, the platelet suspensions were stained with P-selectin–FITC for 30 min. A final volume of 1 mL was used for an immediate analysis through flow cytometry (Becton Dickinson, FACScan Syst., San Jose, CA, USA). Data were collected from 10,000 platelets per experimental group. All experiments were repeated at least three times to ensure reproducibility.

This experiment was performed as previously described with minor modification [12]. In brief, platelet suspensions (3 × 107 cells/mL) were preincubated with VU1, VU2, or 0.1% DMSO for 3 min at 37 °C, then transferred to fibrinogen (100 μg/mL)-coated slides, and allowed to adhere and spread for 1.5 h at 37 °C. The slides were immediately washed to detach non-adherent platelets, and adherent platelets were fixed with 4% paraformaldehyde. Samples were blocked with 5% BSA in PBS and incubated with FITC-phalloidin for 1 h at 37 °C. Fluorescence images were obtained using a Leica TCS SP5 confocal spectral microscope (Leica Microsystems, Wetzlar, Germany), and the platelet number and size were quantified in three random fields using ImageJ.

Platelet suspensions (3.6 × 108 cells/mL) were pretreated with VU1, VU2, or 0.1% DMSO for 3 min, and subsequently, clot retraction was initiated with thrombin (0.01 U/mL) in the presence of fibrinogen (2 mg/mL) and CaCl2 (1 mM). Clot retraction was allowed to proceed at 37 °C in an aggregometer tube and photographed at the indicated times.

ICR and C57BL/6 mice (20–25 g, male, 5–6 weeks old) were obtained from BioLasco (Taipei, Taiwan). All procedures were approved through the Affidavit of Approval of Animal Use Protocol of Taipei Medical University (Approval No. LAC-2016-0195) and were in accordance with the Guide for the Care and Use of Laboratory Animals (Eighth Edition, 2011). The concentration of 5 μM of VU1 and VU2 was chosen and calculated accordingly into mouse doses VU1 (2.7 mg/kg) and VU2 (2.5 mg/kg), respectively [13].

Thrombus formation was assessed as previously described [11]. Mice were anaesthetized using a mixture containing 75% air and 3% isoflurane maintained in 25% oxygen, and the external jugular vein was cannulated with a polyethylene-10 tube for intravenously administering dyes and drugs. Venules (30–40 mm) were selected for irradiation at wavelengths of <520 nm to produce a microthrombus. Either VU1 (2.7 mg/kg) or VU2 (2.5 mg/kg) was administered for 10 min before the administration of sodium fluorescein (20 mg/kg), and the time required to occlude the microvessel through thrombus formation (occlusion time) was recorded. The dose for mice was accordingly converted from the dose for humans [13].

Mice were anaesthetized with a mixture containing 75% air and 3% isoflurane maintained in 25% oxygen. They were intraperitoneally administrated with saline (control), DMSO (solvent control), VU1 (2.7 mg/kg) or VU2 (2.5 mg/kg) for 30 min. Immediately, bleeding was induced by severing the tail 3 mm from the tail tip, and the bleeding tail stump was immersed in saline. The bleeding time was continually recorded until no sign of bleeding was observed for at least 10 s. The dose for mice was accordingly converted from the dose for humans [13].

The experimental results are expressed as means ± standard error of the mean (SEM), and are accompanied by the number of observations (n). Values of n refer to the number of experiments, each of which was conducted using different blood donors. All experimental results were assessed through analysis of variance (ANOVA). If ANOVA indicated significant differences in the group means, each group was compared using the Newman–Keuls method. Survival curves were plotted using the Kaplan–Meier method, and the groups were compared using the log-rank test. A value of p < 0.05 was considered statistically significant.

We found that VU1 and VU2 at a concentration of 25 μM effectively reduced thrombin- and U46619-induced platelet aggregation (Figure 2A). To confirm the selectivity of VU1 and VU2, we further examined the phosphorylation of PLD1 and PLD2 at Thr147 and Tyr169, respectively; these sites have been reported to be associated with their activities [15,16]. We found that VU1 and VU2 dose-dependently (10–25 μM) inhibited the phosphorylation of PLD1 and PLD2, respectively (Figure S1A). Moreover, VU1 and VU2 at 25 μM markedly inhibited the phosphorylation of PLD1 and PLD2 (Figure 2B), indicating that VU1 (25 μM) and VU2 (25 μM) non-selectively inhibited both PLD1 and PLD2. These findings suggest that the concurrent inhibition of PLD1 and PLD2 may exert an optimal effect inhibiting all agonist-induced platelet aggregation. Therefore, in this study, we focused on the role of PLD, not specific to PLD1 or PLD2, in human platelet activation. The concentration of 25 μM of VU1 and VU2 was accordingly used to determine the role of PLD in human platelets in the following experiments. As shown in Figure 2C,D, VU1 (25 μM) and VU2 (25 μM) reduced thrombin-induced ATP release and P-selectin secretion, suggesting that PLD regulates granule release. Our data also support the fact that both PLDs are involved in platelet activation, granule release, and aggregation in human platelets. In addition, VU1 and VU2 (10–25 μM) did not exhibit cytotoxic effects on human platelets, as detected by the lactate dehydrogenase (LDH) assay (Figure S2), indicating that the VU1- and VU2-mediated inhibition of platelet activation is not due to the cytotoxicity.

In conclusion, this study demonstrated that both PLD1 and PLD2 are essential for platelet activation in humans, and PLD plays differential roles in platelet function in humans and mice. Furthermore, a safe and alternative therapeutic approach to preventing thromboembolic disorders, such as secondary stroke, may be achieved by targeting PLD. 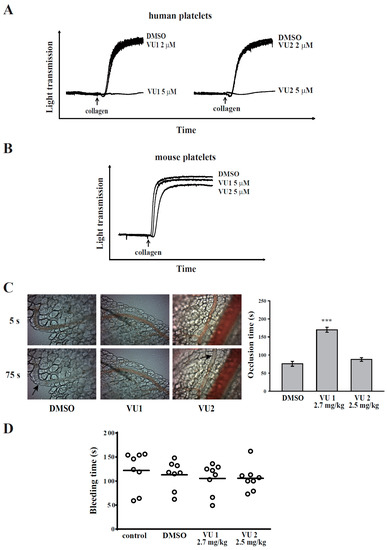 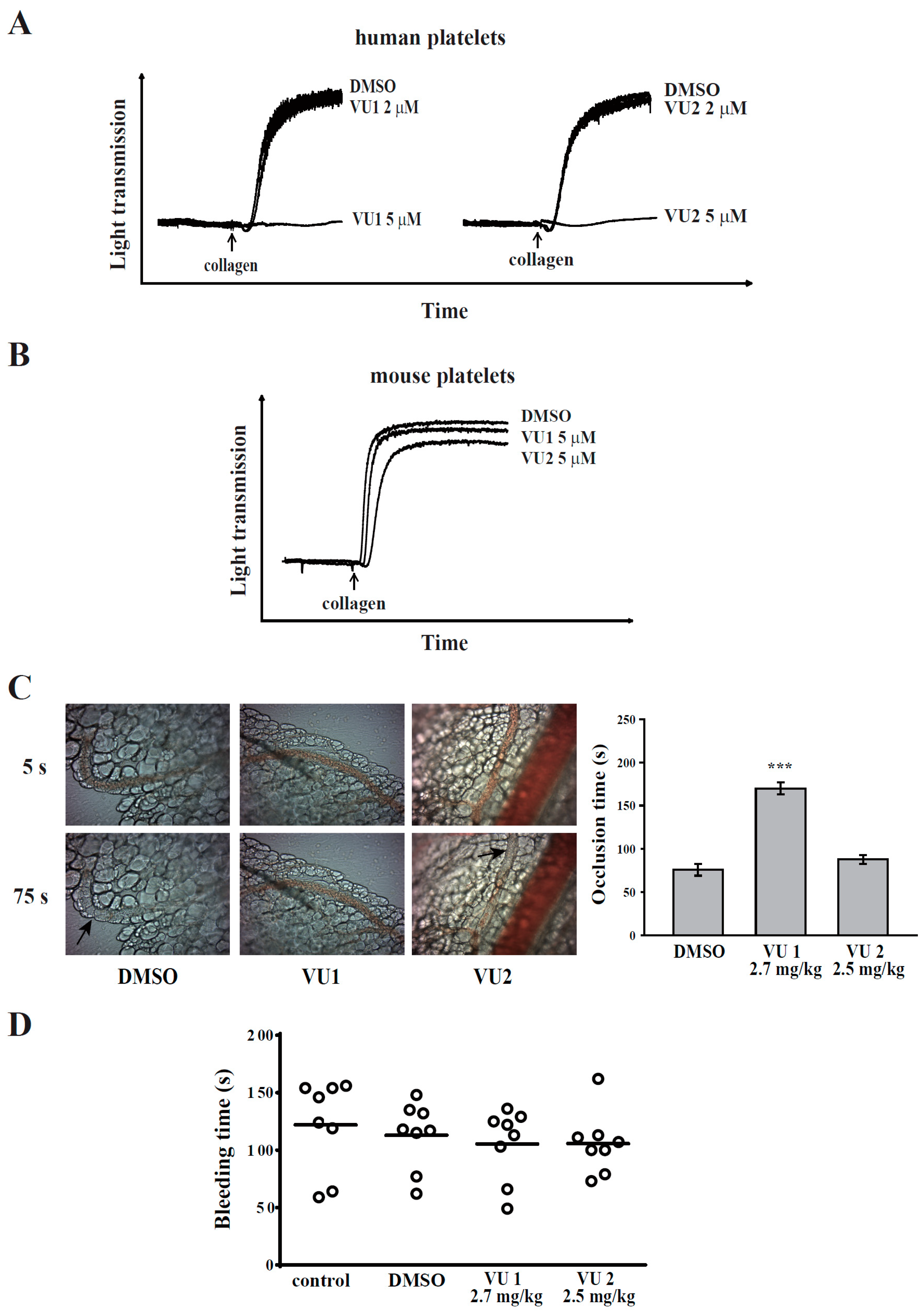 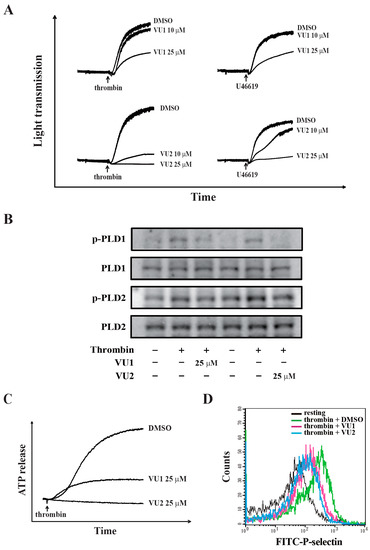 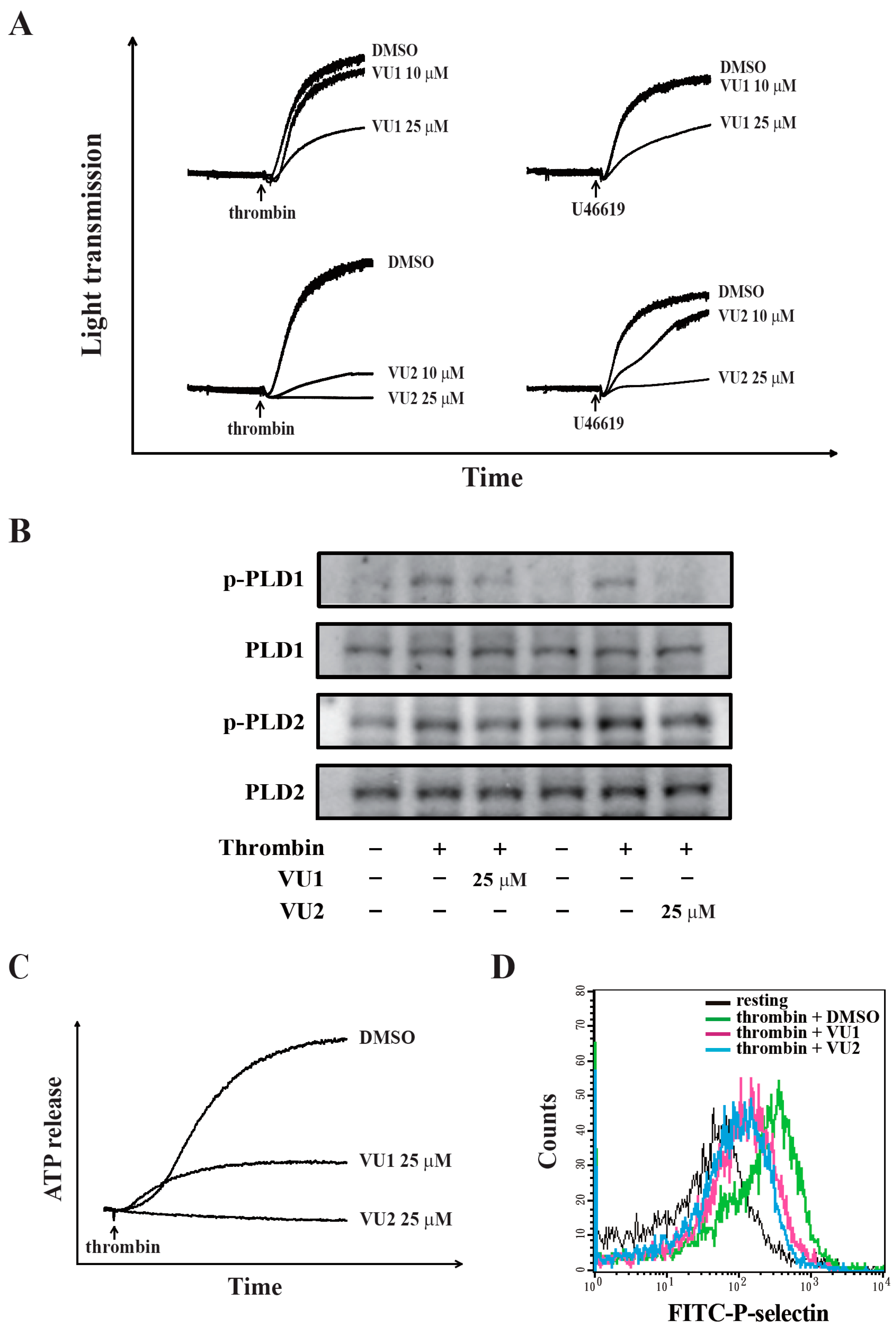 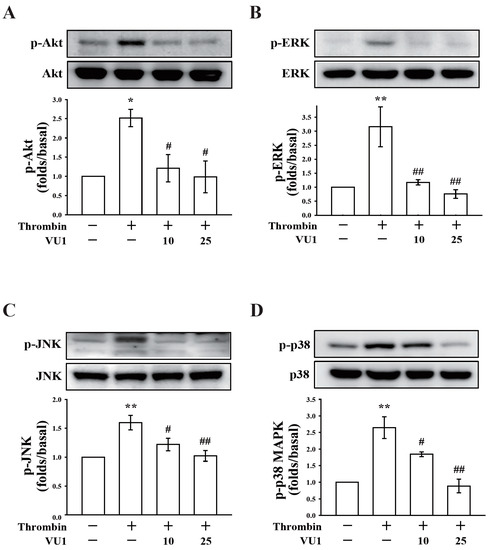 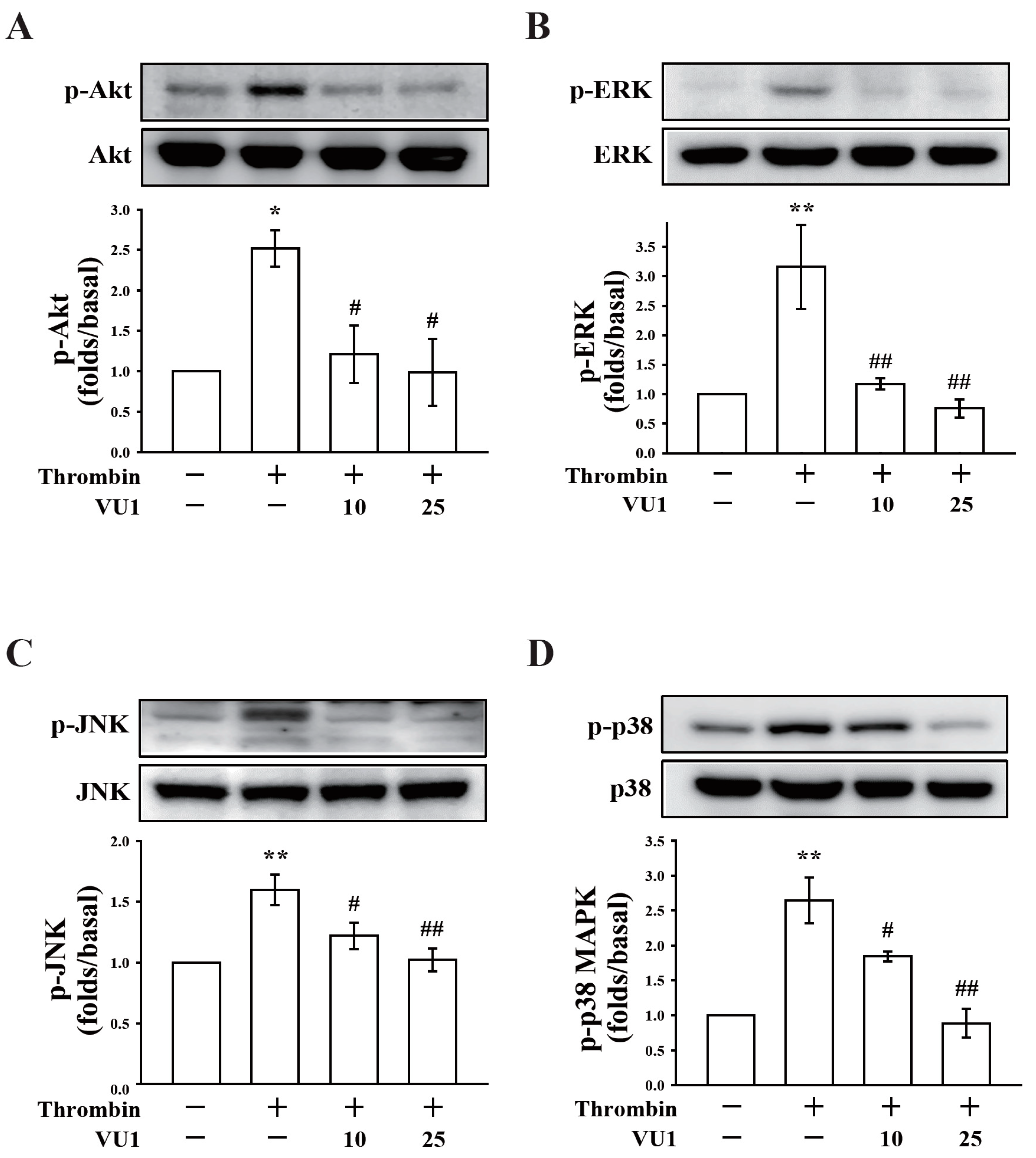 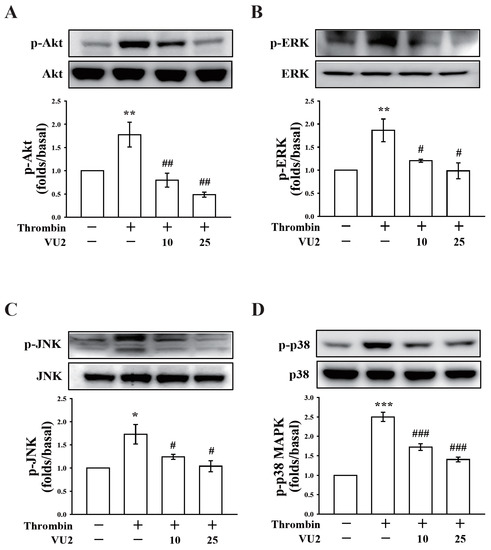 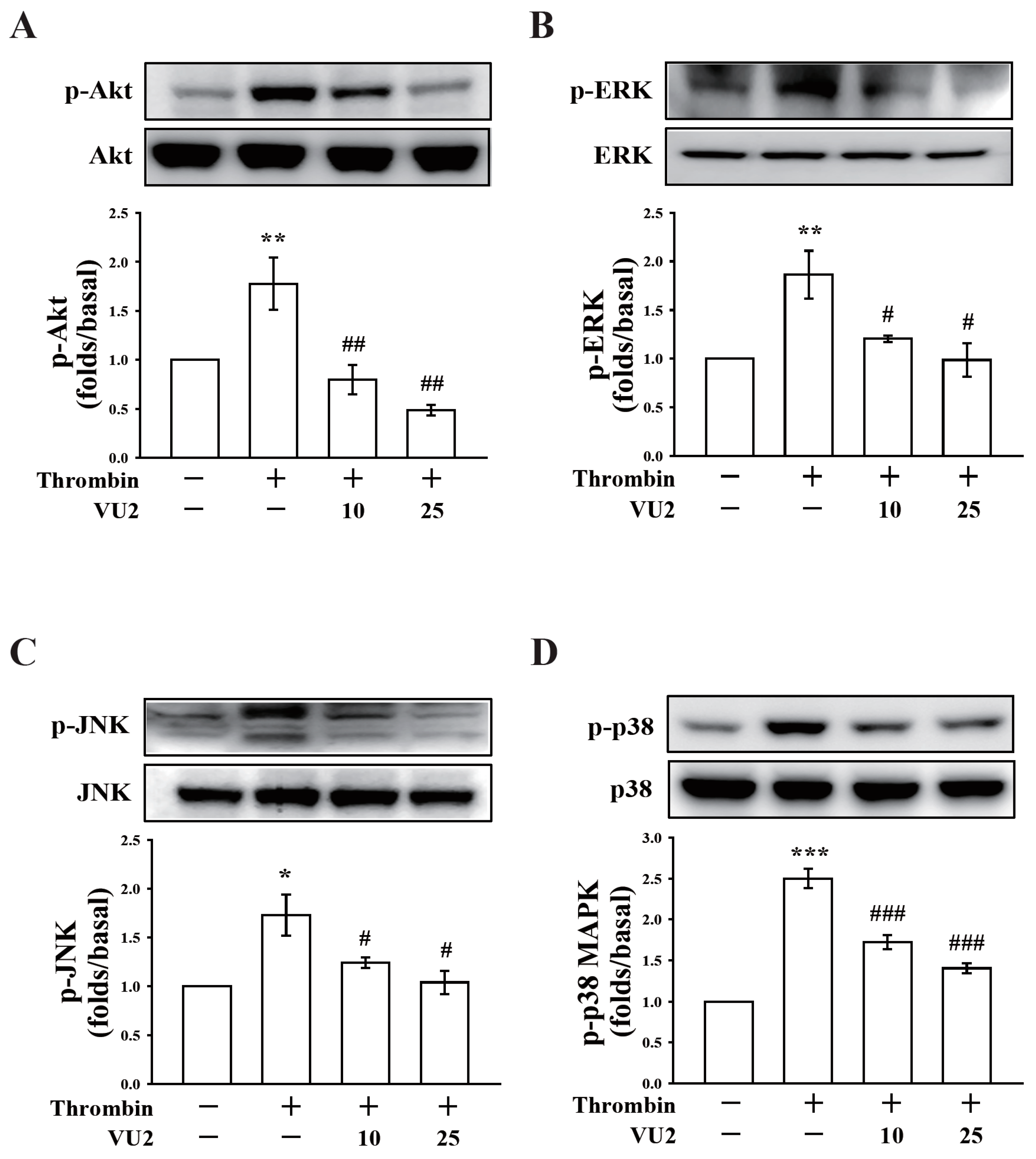 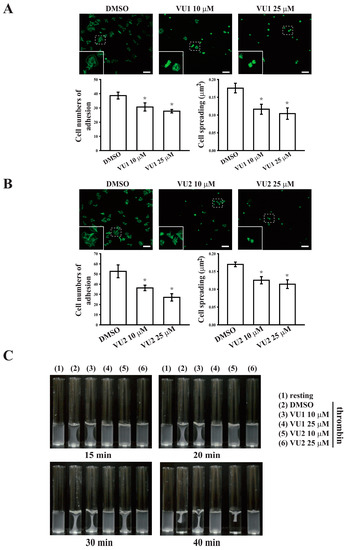 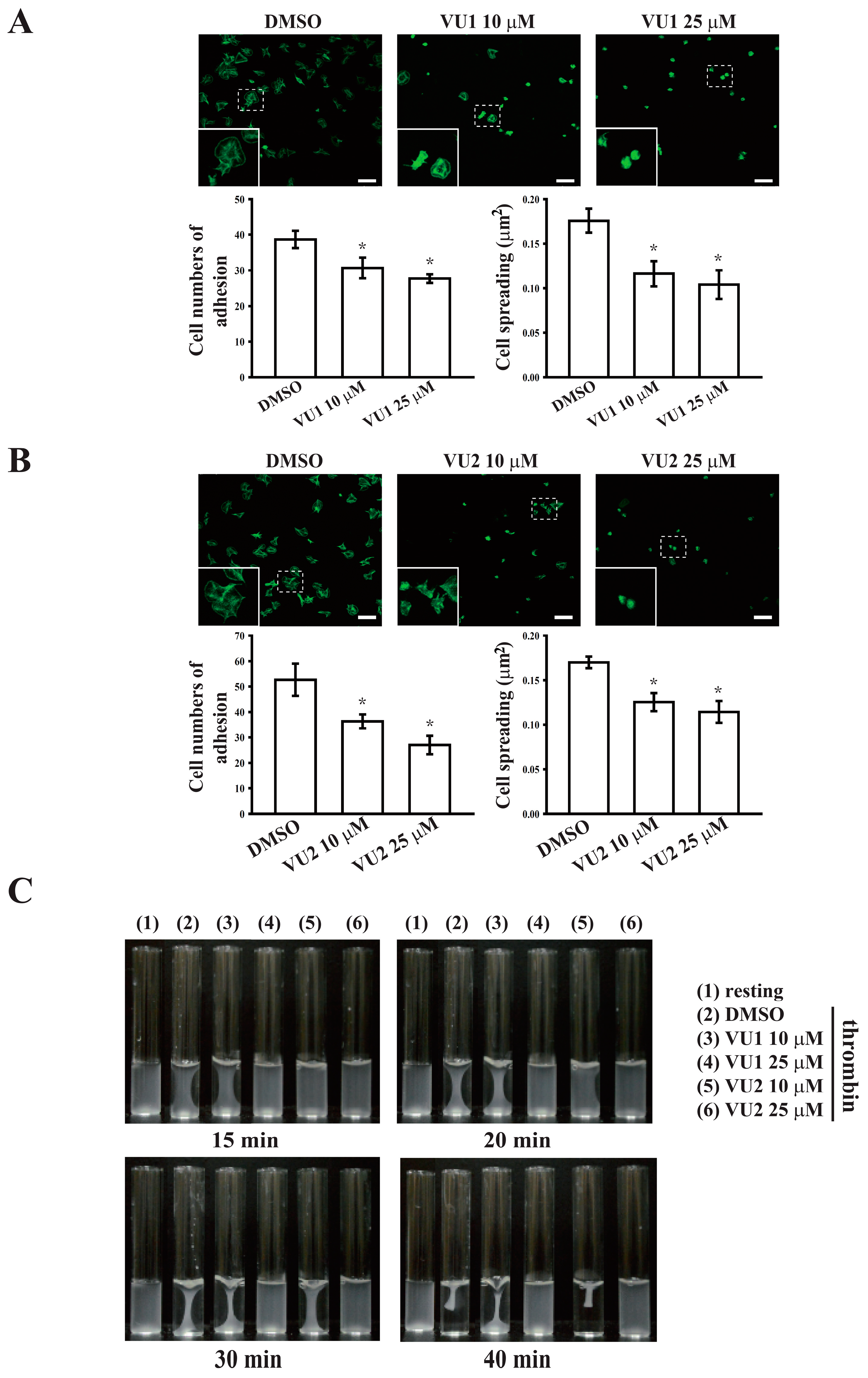 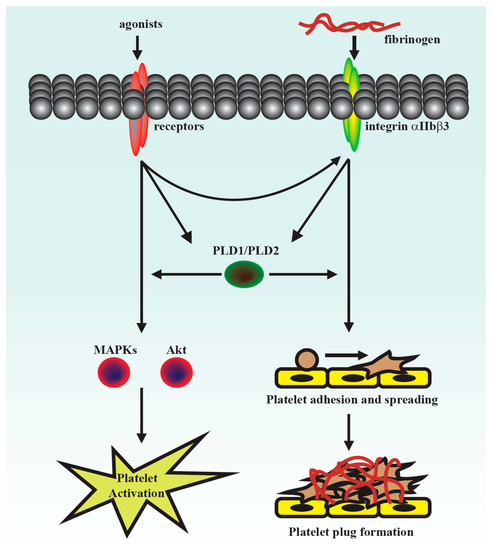 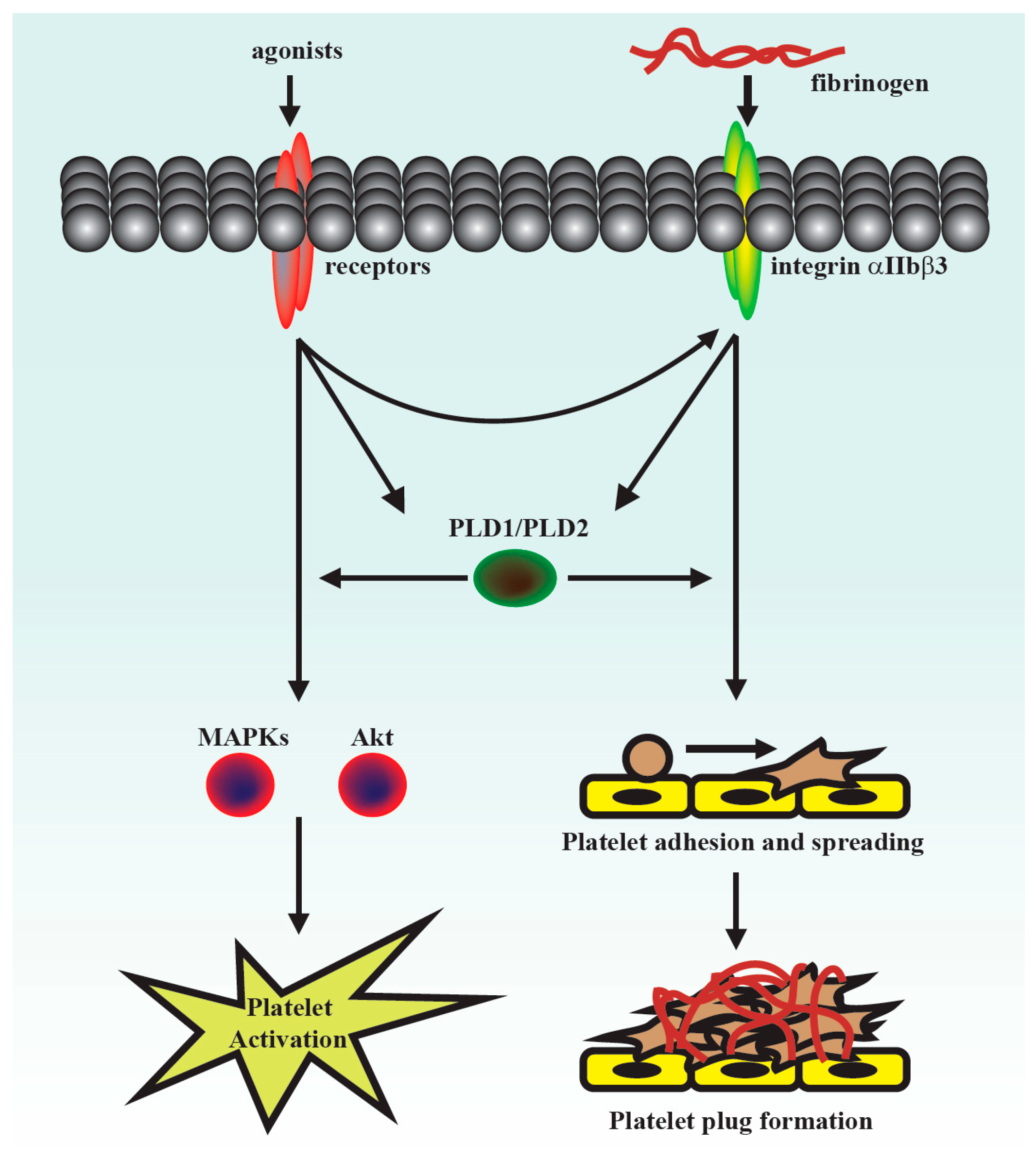