Perspectives on the Use of a Medium-Dose Etoposide, Cyclophosphamide, and Total Body Irradiation Conditioning Regimen in Allogeneic Hematopoietic Stem Cell Transplantation: The Japanese Experience from 1993 to Present
Next Article in Special Issue

Microangiopathy in Naifold Videocapillaroscopy and Its Relations to sE- Selectin, Endothelin-1, and hsCRP as Putative Endothelium Dysfunction Markers among Adolescents with Raynaud’s Phenomenon
Previous Article in Special Issue

Risk of Depression and Suicidality among Diabetic Patients: A Systematic Review and Meta-Analysis

Brain-derived neurotrophic factor (BDNF) has been established as a candidate molecule for the pathophysiology of neuropsychiatric disorders, such as schizophrenia [1] and major depressive disorder (MDD) [2,3,4,5]. Many past studies have shown the relationships between decreased serum BDNF protein levels and MDD [5,6,7,8,9,10,11,12]. Antidepressant treatment has also been shown to increase BDNF levels [13]. The relationships between BDNF polymorphisms and MDD have also been extensively studied [5,14,15,16,17,18,19,20,21,22]. Generally speaking, lower serum BDNF protein levels were frequently observed in the patients with MDD, as compared with healthy controls, and the presence of BDNF polymorphisms had been associated with lower BDNF protein levels and certain clinical phenotypes, such as suicide.
However, investigations on candidate molecules and their pathways have not fully explained the pathophysiology of various neuropsychiatric disorders. In the recent years, epigenetic investigations of various neuropsychiatric disorders have garnered more attention. Epigenetic modifications such as DNA methylation, histone modifications, and non-coding RNAs can affect gene activity and expression, without alterations in the DNA sequence. Epigenetic regulation in the postmortem brain tissues and peripheral blood cells of psychiatric patients has been studied [5,14,23,24,25,26,27,28]. Some of those works focused on epigenetic alterations of promoters of BDNF gene and its receptor tyrosine kinase B (TrkB) [5,9,14,24,25,28].
In the animal models of depression, the epigenetic modifications of the BDNF promoters have been investigated, particularly on BDNF exons I, IV, and IX [29,30,31,32]. In clinical samples, studies had also investigated the relationship between BDNF and TrkB methylation status and antidepressant response, as well as their association with suicide [14,19,25,33]. In past studies, methylation levels of BDNF exon I and IV promoters in peripheral blood were studied more extensively, and were found be to be associated with severe mental disorders, such as schizophrenia [34,35], bipolar mania [36] and MDD [5,24,28,37]. Methylation level of CpG site 87 of BDNF exon IV promoters in patients with MDD could be used to predict antidepressant response [28]. However, data on the CpG sites near rs6265 (equivalent to the G196A or Val66Met polymorphism) in the BDNF region in peripheral blood has not been studied before, especially at BDNF exon IX (coding exon) [30,38].
In this study, we aimed to investigate the associations of BDNF promoter exon IX DNA methylation, BDNF protein, and mRNA levels in the peripheral blood of patients with MDD and healthy controls.

From August 2010 to July 2012, patients with MDD and healthy controls were evaluated according to DSM-IV criteria using a semi-structured interview or the Chinese Health Questionnaire-12 [39]. Institutional review board approval was obtained from the ethics committee of our medical center, a tertiary hospital in southern Taiwan. The assessments were done by the same senior psychiatrist. The 17-item Hamilton Depression Rating Scale (HAM-D) was used to assess severity of MDD [40]. The minimum baseline score of the 17-item HAM-D was 18. Antidepressant treatment responders were defined as those with a minimum 50% decrease in the HAM-D total score after 4 weeks of medical treatment. The antidepressants used were all selective serotonin reuptake inhibitors (SSRI), including fluoxetine 20–40 mg/day, paroxetine 20–40 mg/day, and escitalopram 20–40 mg/day. Patients were allowed the combined use of benzodiazepines (i.e., lorazepam 3 mg/day) or hypnotics (i.e., zolpidem 10 mg/day). No patient received mood stabilizers or antipsychotic drugs. The patients did not have systemic diseases, including cardiovascular, liver and thyroid diseases. All patients did not receive any drugs for at least 2 weeks before entering the study. They were also not heavy smokers or alcohol-dependent. The patients had the ability to complete the written informed consent.

Venous blood (15 mL) was obtained from each sample to analyze the BDNF protein, mRNA, and exon IX promoter methylation levels in all participants at baseline. Those biological markers in the patients with MDD were checked again after four weeks of antidepressant treatment.

We chose 14 CpG sites near rs6265 in the BDNF exon IX. Pyrosequencing analysis was performed after polymerase chain reaction (PCR). The detailed information of those sites was the same as previously described [43].

RNA was isolated after peripheral blood was collected. The RNA was then reverse-transcribed into cDNA, and quantitative PCR was performed. The detailed information of those sites was the same as previously described [43].

All results are expressed as mean ± standard deviation (SD). Statistical differences in serum BDNF protein level, mRNA, and exon IX CpG sites methylation density levels of patients with MDD and healthy controls were determined by analysis of variance (ANOVA), analysis of co-variance (ANCOVA) with age or body mass index (BMI) adjustment, or independent t-test. Comparison of data acquired at baseline and after four weeks of antidepressant treatment was made with paired t-test. p values < 0.05 were considered to be statistically significant.

From August 2010 to July 2012, 51 patients with MDD and 62 healthy controls were recruited for this study. Their demographic data and serum BDNF mRNA levels at baseline of all participants are shown in Table 1.

This work was supported by a clinical research grant from the National Science Council (NSC99-2628-B-182-002), Taiwan.

We would like to thank Ya-Ting Lo for laboratory and administrative assistances throughout the project. 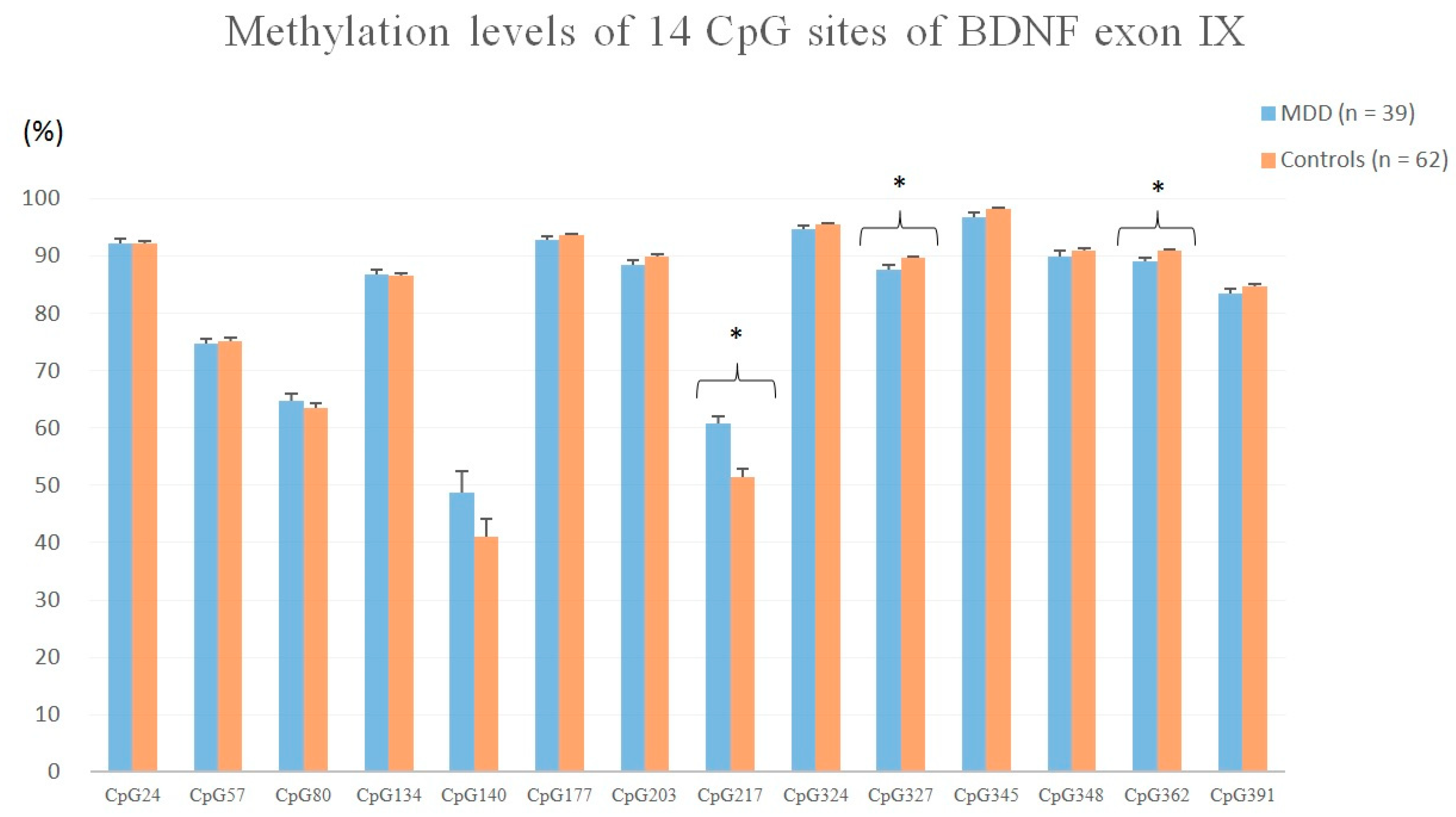 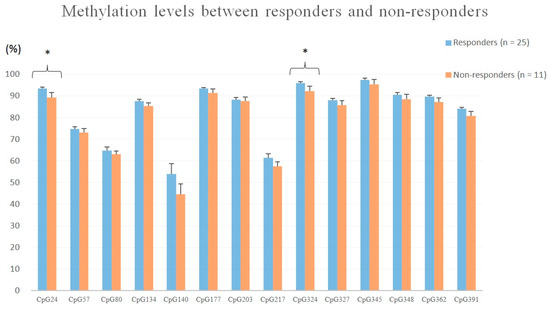 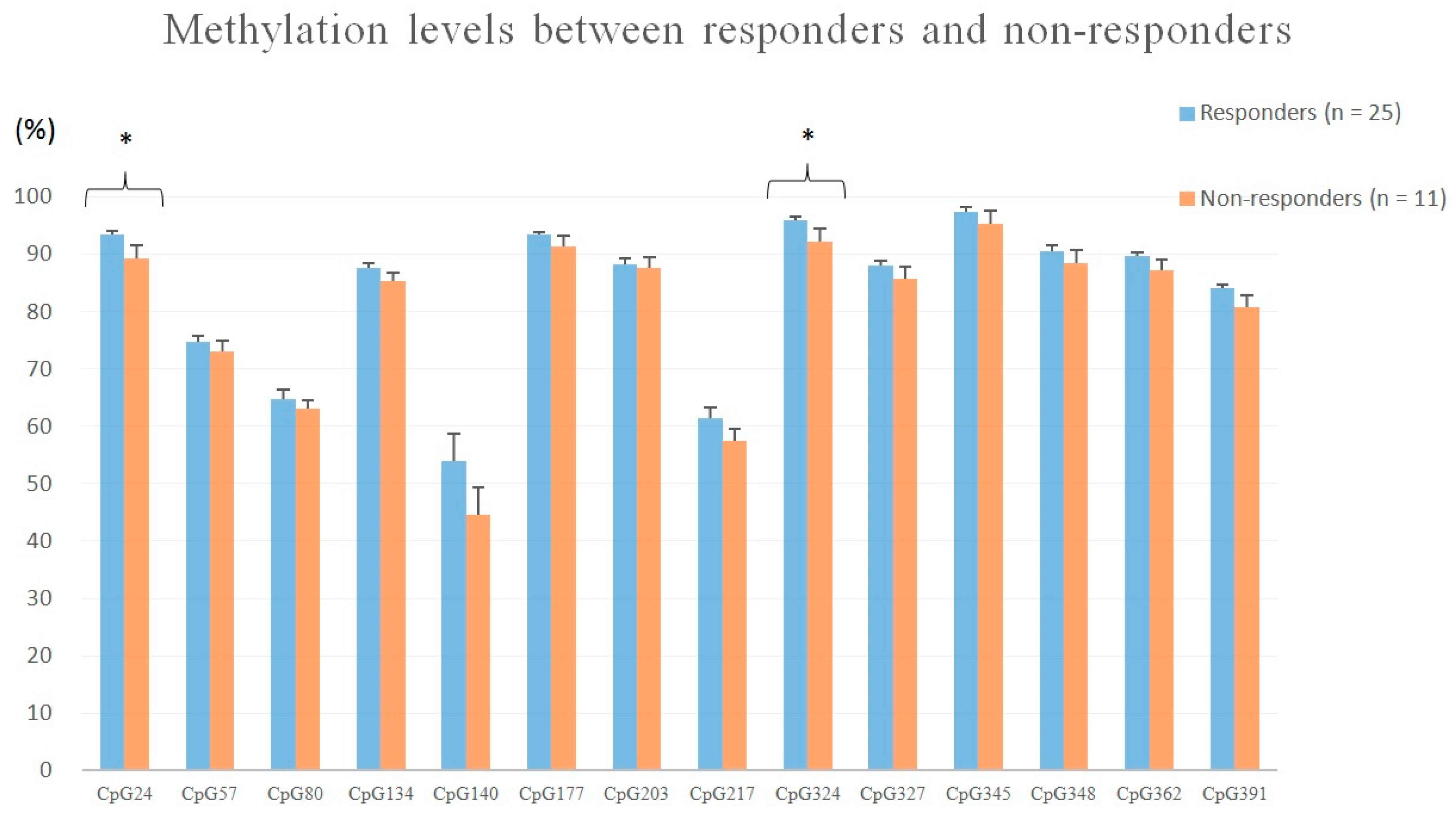 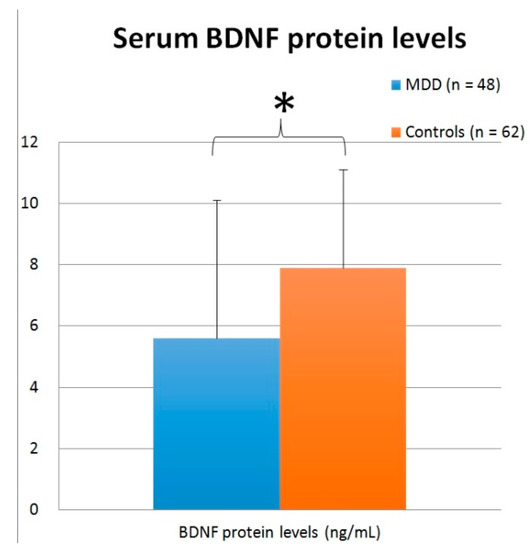 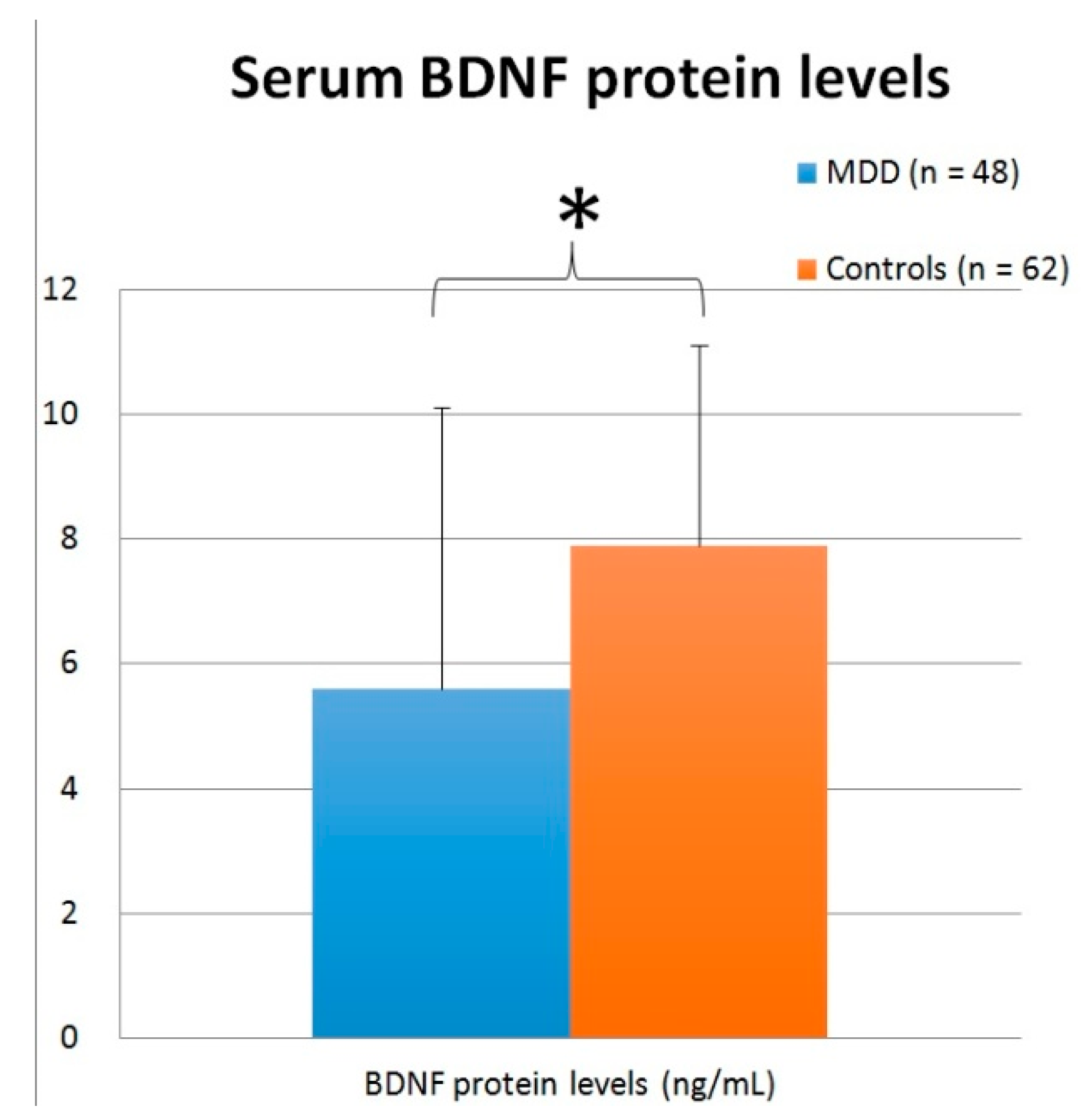 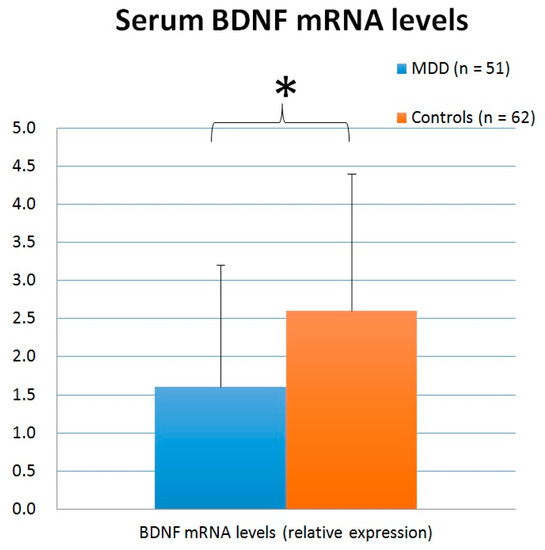 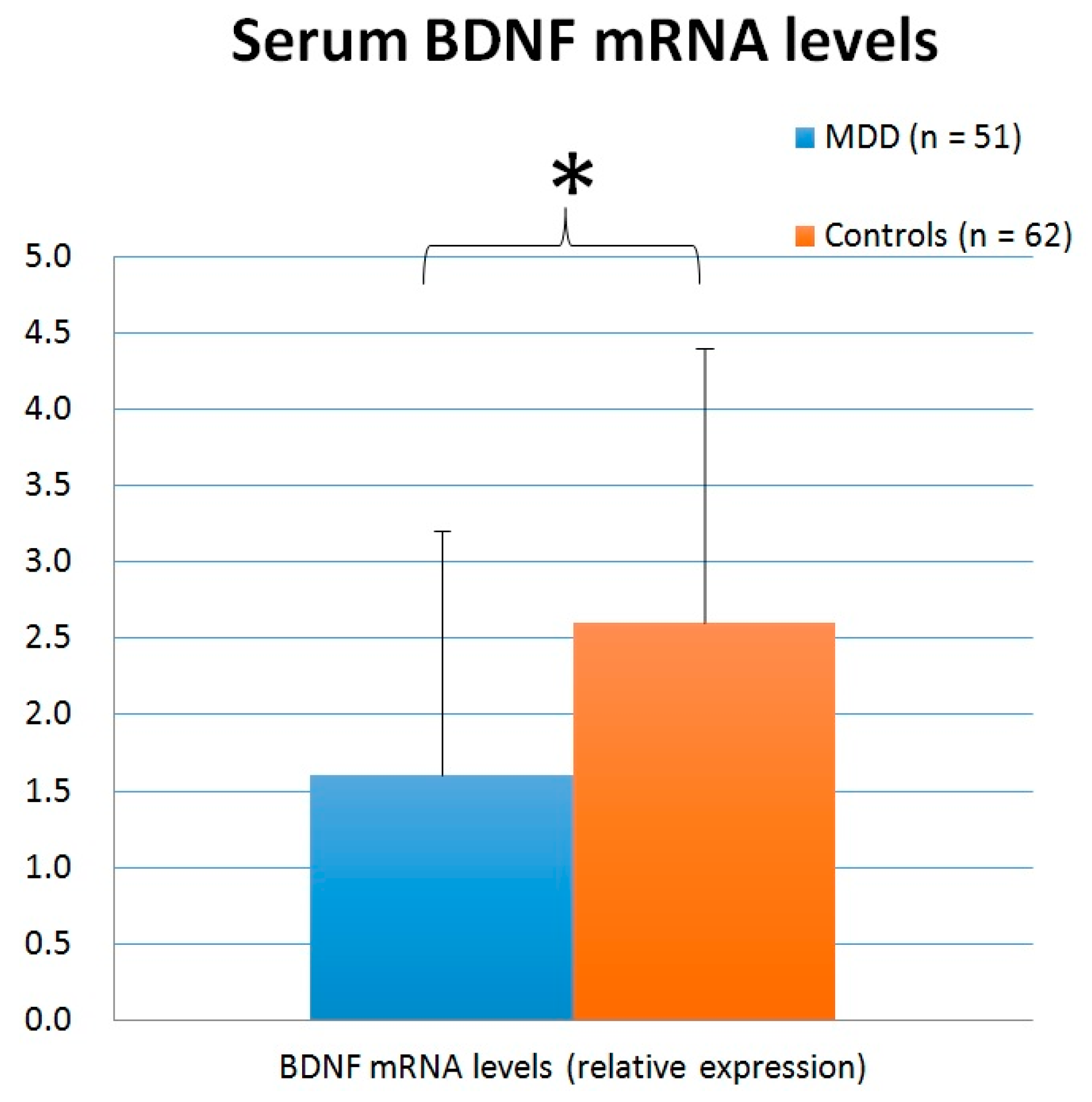