Effects of Exogenous Trans-Zeatin and Lovastatin on Abortion of Small Seeds in ‘Dawuxing’ Loquat (Eriobotrya Japonica Lindl.)
Next Article in Special Issue

Iran is one of the countries exposed to drought [15] as climate change and inadequate agricultural irrigation systems are among the main reasons mentioned in the literature for the problem of drought in Iran [25]. Drought is a serious threat to food security and has created many challenges for food supply in Iran. Iran is a vast country with diverse climatic conditions that have led to the cultivation of various agricultural products in different parts of the country. Drought and rising population growth, nonetheless, have jeopardized food supply and food security in the country. Qasemipour and Abbasi [14] believe that intensive agricultural practices in Iran led to water scarcity of 206%. Of course, research solutions have been proposed to address water management in order to increase food security and improve food production in Iran. Raeisi et al. [16], for example, consider greenhouses as an alternative to traditional farming because of better water management and higher crop yields. On the other hand, Akhoundi and Nazif [15] propose a model by which wastewater is used to irrigate agricultural fields instead of using natural water. Besides, Esfahani et al. [26] introduce a more creative model to deal with water scarcity in Iran. They consider overseas cultivation as a solution to contribute to food security in Iran.

1.2. Application of Data Science in Food and Agriculture

For predicting the future trends of food production in Iran, two models of MLP and ANFIS are applied in the collected data, and the predictive performance of the models are compared based on the accuracy metrics. We trained the proposed models by minimizing a regularized loss function on the training set and evaluated the models by comparing the accuracy metrics on the test set.

Multilayer perceptron (MLP) is a type of neural network that has a supervised learning technique using the back-propagation method. Figure 2 shows that MLP benefits from a three-layer structure, including the input layer, hidden layer/s, and output layer/s, in which each neuron is connected to all the neurons in the next layer. It is frequently reported that MLP has a great function in non-linear problems [46,47].
Equation (1) shows how the output of input variables, bias values, and input values are calculated: where I represent the input layer, Ii is the input variable i, n shows the total number of inputs, βj is a bias value, and ωij is the weight of connections in j level. The sigmoid function is mostly used as the activation functions in MLP and it can be calculated through Equation (2): where, S is the activation function. Therefore, the ultimate output neuron j can be measured in Equation (3): where, y presents the output value of the MLP method, which needs to be compared by the target values for calculating the model performance. MLP was trained by 70% of total data as a training dataset, which has been sorted randomly by the model. The training was performed by different sets of the neuron numbers in the hidden layer for finding the best architecture for the predictor model from 10 to 18 by interval 4. The activation function was selected to be the Tanh(x) due to its higher performance compared with other activation functions.

The adaptive network-based fuzzy inference system is a hybrid neural network in which a fuzzy logic (FL) is embedded to the artificial neural network (ANN) architecture to identify the optimal distribution of membership functions [48]. The inference system of ANFIS consists of five layers in which the input of each layer is the output of the previous layer. This method applies fuzzy if-then rules of Sugeno, and if an ANFIS model has two inputs (x, y) and one output (fi), for example, the two rules for a first-order two-rule are:
where x and y are the ANFIS inputs, A and B are the fuzzy sets, and fi(x, y) is the outputs of the first-order Sugeno fuzzy. The architecture of an ANFIS model constitutes adaptive nodes and fixed nodes (see Figure 3). The first layer of the model includes adaptive nodes that can be calculated through Equations (4)–(6). where x and y are the inputs, A and B are the linguistic labels, µ(x) and µ(y) are membership functions that take values between 0 and 1, and ai, bi, and ci are the parameter sets.
The second layer, which is shown in red circles in Figure 3, is a fixed node and can be calculated through Equation (7). It is worth mentioning that ωi is the firing strength of a rule.
O2,i as the output of the second layer enters to the third layer. The third layer, which is presented in yellow circles in Figure 3, is also a fixed node. Its main goal is to normalize the firing strength by using Equation (8).
The fourth layer is an adaptive node as well and depicted as green squares. Equation (9) is used to measure the fourth layer.
where pi, qi, and ri are the parameters sets.
The fifth layer is also a fixed node presented in the form of a blue circle in Figure 3 and can be calculated through Equation (10).
The final output of an ANFIS structure, which is shown as fout in Figure 3, can be calculated through Equation (11).
ANFIS was trained using 70% of the total data (randomly selected). Input variables were time-series data. The training parameter was the type of the membership function (MF). Since it has the maximum effect on the accuracy and performance of the ANFIS model. Triangular, trapezoidal, and G-bell types were selected as the frequently used and popular MF types for comparison purposes in the presence of linear output MF type (for its highest accuracy in comparison with constant type MF). Other parameters like the number of MF types and hybrids method were considered to be constant because they did not have any significant effect on the modeling procedure in the present study. One of the main reasons can be the dimension of the dataset in the present study. The rest of the data set (30% of the total dataset) was employed for the testing step.

To compare the predictive power and accuracy performance of MLP and ANFIS two evaluation criteria namely RMSE and determination coefficient (R) are measured for both models. Equations (12) and (13) respectively show how to calculate RMSE and R2. where A is the target values, P refers to the predicted values (output of models), and N is the number of data. Using these performance parameters, the accuracy of models can be calculated for comparison purposes.

In this study, the process of selecting the appropriate model with better predictive power was designed in such a way that the models were first trained by 70% of the data. After the training phase, the predictive performance of the models was tested on the remaining 30% of the data, and then the accuracy of the models was measured and compared by accuracy metrics RMSE and R2. Table 1 shows that the variables of xt−1, xt−2, and xt−3, which are respectively the representation of live animals, animals slaughtered, and livestock yield, are the inputs variables of livestock production quantity and xt−4 and xt−5, which are respectively the representation of yield and losses of agricultural productions, are the input variables of agricultural productions. In other words, the current model constitutes two outputs: (1) livestock production and (2) agricultural production.

As it is mentioned above, 70% of the data are used to train the models. The training phase was repeated three times, with each model being tested with a different number of neurons.
By changing the number of neurons, the accuracy of the MLP model can be controlled and it reveals the most accurate model. Table 2 shows that in the training phase of the MLP model with the number of neurons ten, fourteen, and eighteen were tested. At this stage, the model with ten neurons for predicting livestock production and the model with 18 neurons for predicting agricultural production had the best performance because the corresponding RMSEs were lower compared to other models.
On the other hand, to control the accuracy of the ANFIS model in the training phase, the predictive accuracy of different membership functions (MF) was tested. In this study, triangular-shaped (Tri.), trapezoidal-shaped (Trap.), and generalized bell-shaped (Gbell) built-in membership functions were evaluated. The results of the evaluation of the accuracy of MFs are presented in Table 3.
The results show that the model with the Trap. built-in membership function had the highest accuracy for predicting both livestock and agricultural production because the RMSE of this model was 4,080,579.79 for livestock production and 987,950.19 for agricultural production, which were lower than other membership functions. The comparison of Table 2 and Table 3 illustrates that the performance of the ANFIS model compared to the MLP model in predicting both agricultural and livestock production was higher. Since the values of RMSE of this model in all cases was lower than the MLP model in the training phase. 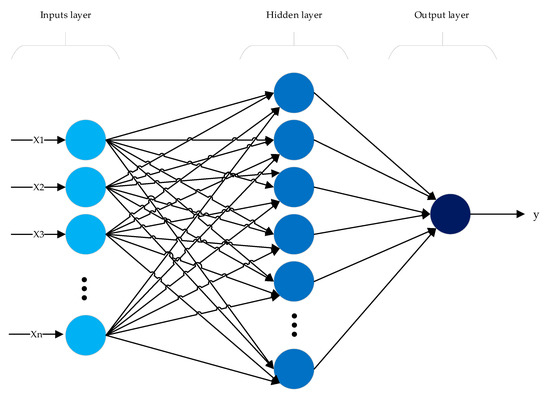 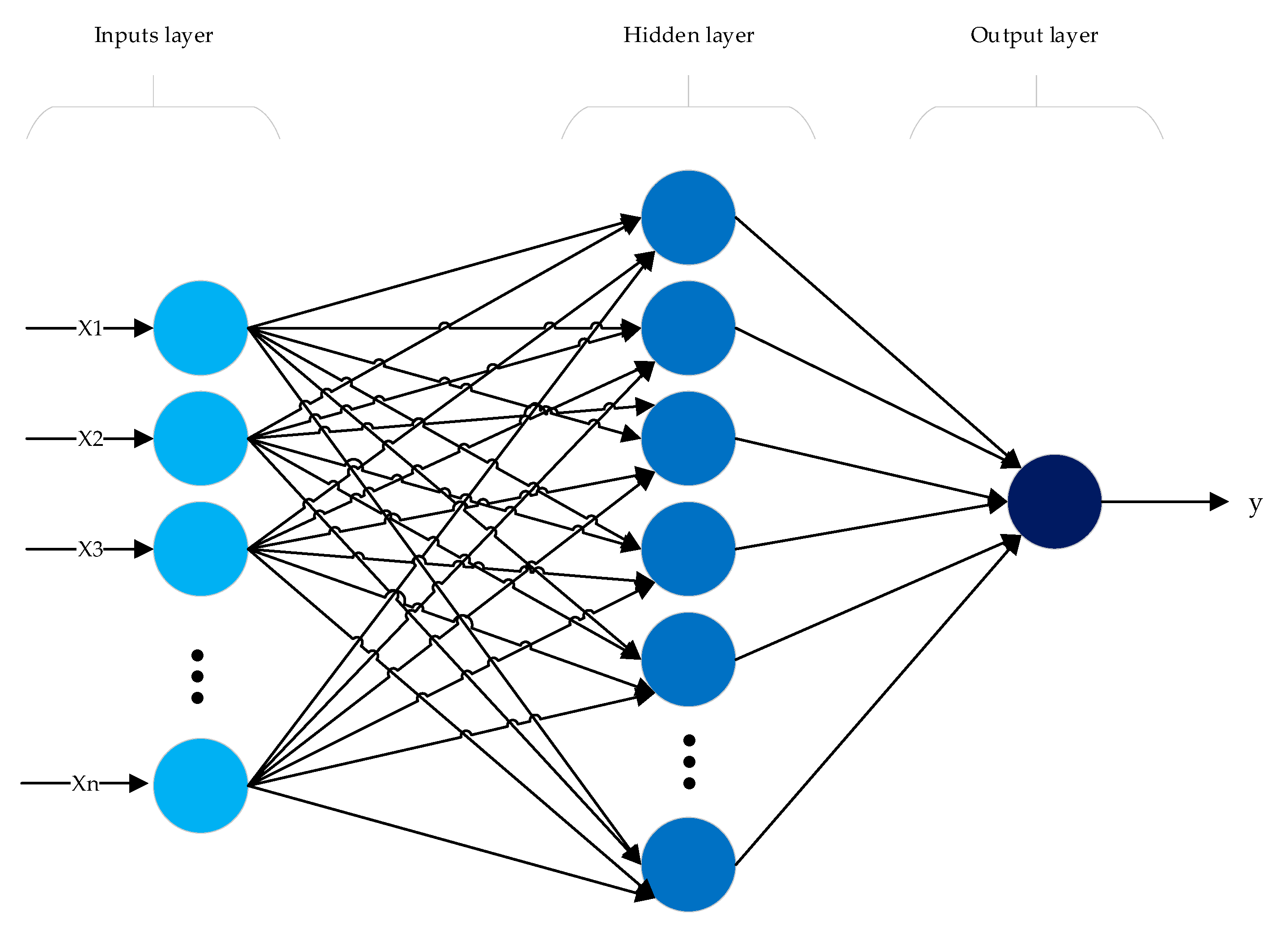