Productivity and Efficiency in European Milk Production: Can We Observe the Effects of Abolishing Milk Quotas?
Previous Article in Special Issue

This research illustrates the technical efficiency of the pan-India paddy cultivation status obtained through a stochastic frontier approach. The results suggest that the mean technical efficiency varies from 0.64 in Gujarat to 0.95 in Odisha. Inputs like human labor, mechanical labor, fertilizer, irrigation and insecticide were found to determine the yield in paddy cultivation across India (except for Chhattisgarh). Inefficiency in the paddy production in Punjab, Bihar, West Bengal, Andhra Pradesh, Tamil Nadu, Kerala, Assam, Gujarat and Odisha in 2016–2017 was caused by technical inefficiency due to poor input management, as suggested by the significant σ2U and σ2v values of the stochastic frontier model. In addition, most of the farm groups in the study operated in the high-efficiency group (80–90% technical efficiency). No specific pattern of input use can be visualized through descriptive measures to give any specific policy implication. Thus, machine learning algorithms based on the input parameters were tested on the data in order to predict the farmers’ efficiency class for individual states. The highest mean accuracy of 0.80 for the models of all of the states was achieved in random forest models. Among the various states of India, the best random forest prediction model based on accuracy was fitted to the input data of Bihar (0.91), followed by Uttar Pradesh (0.89), Andhra Pradesh (0.88), Assam (0.88) and West Bengal (0.86). Thus, the study provides a technique for the classification and prediction of a farmer’s efficiency group from the levels of input use in paddy cultivation for each state in the study. The study uses the DES input dataset to classify and predict the efficiency group of the farmer, as other machine learning models in agriculture have used mostly satellite, spectral imaging and soil property data to detect disease, weeds and crops. View Full-Text
Keywords: paddy; stochastic frontier; machine learning; k-nearest neighbour (KNN); support vector machine (SVM); random forest (RF) paddy; stochastic frontier; machine learning; k-nearest neighbour (KNN); support vector machine (SVM); random forest (RF)
►▼ Show Figures 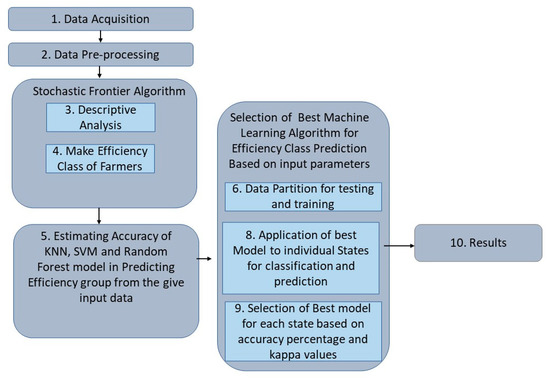 Akash Kumar Bhoi
AKASH KUMAR BHOI [B.Tech, M.Tech, Ph.D.] has been working as Assistant Professor (Research) in the Department of Electrical and Electronics Engineering at Sikkim Manipal Institute of Technology (SMIT), India since 2012. He is also working (Period: 20th Jan 2021 - 19th Jan 2022) as Research Associate at Wireless Networks (WN) Research Laboratory, Institute of Information Science and Technologies, National Research Council (ISTI-CRN) Pisa, Italy. He is a University Ph.D. Course Coordinator for “Research & Publication Ethics (RPE).” He is a member of IEEE, ISEIS, and IAENG, an associate member of IEI, UACEE, and an editorial board member reviewer of Indian and international journals. He is also a regular reviewer of repute journals, namely IEEE, Springer, Elsevier, Taylor and Francis and Inderscience, etc. His research areas are Biomedical Technologies, the Internet of Things, Computational Intelligence, Antenna and Renewable Energy. He has published several papers in national and international journals and conferences. He has 100+ documents registered in the Scopus database by the year 2020. He has also served on numerous organizing panels for international conferences and workshops. He is currently editing several books with Springer Nature, Elsevier and Routledge & CRC Press. He is also serving as Guest editor for special issues of journals like Springer Nature and Inderscience.

Paolo Barsocchi
PAOLO BARSOCHI is a senior researcher at the Information Science and Technologies Institute (ISTI) of the National Research Council (CNR) at Pisa, Italy. He received his M.Sc. and Ph.D. degrees in information engineering from the University of Pisa in 2003 and 2007, respectively. In 2004 he was assistant researcher at the ISTI-CNR Institute, and in 2008 he was visiting researcher at the Universitat Autònoma de Barcelona (Barcelona, ES). From 2010 he is a member of the research staff at the Wireless Network Laboratory of the ISTI-CNR. Since 2017 he is Head of the Wireless Networks Research Laboratory. He has been (and currently is) involved in several European projects, national and regional projects. Dr. Paolo Barsocchi is included in the World's Top 2% Scientists according to the Stanford University List in 2020. He is also a technical committee member and associate editor of some high-ranked journals such as Wireless Communications and Mobile Computing and Sensors. He formed and trained staff in research: PhD students, research fellows, research associates and young researchers. He has co-authored more than 100 papers published on peer-reviewed international journals and conference proceedings. His research interests are in the areas of internet of things (IoT), wireless sensor networks, cyberphysical systems, machine learning and data analysis techniques, smart environments, ambient assisted living, activity recognition and indoor localization.
Zoom | Orient | As Lines | As Sticks | As Cartoon | As Surface | Previous Scene | Next Scene
We use cookies on our website to ensure you get the best experience. Read more about our cookies here.
Accept
We have just recently launched a new version of our website. Help us to further improve by taking part in this short 5 minute survey here. here.
Never show this again