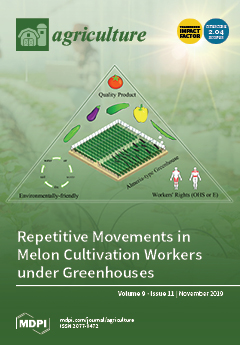 Cover Story (view full-size image): The sustainability of any manufacturing process encompasses three main aspects: product quality, respect for the environment and workers’ rights. Therefore, sustainability is closely related to occupational health and safety and ergonomics. Musculoskeletal disorders are a serious problem that affects workers in many sectors, one of them being agriculture. In this study, the Rapid Upper Limb Assessment (RULA) method is used to perform an ergonomic evaluation of melon cultivation workers in Almeria-type greenhouses. A high physical load is observed. In addition, in more than half of the postures, the neck, trunk and lower limbs are more affected than the upper limbs. Some recommendations are proposed to improve the working conditions for workers. View this paper.
Previous Issue
Volume 9, October
Next Issue
Volume 9, December
We use cookies on our website to ensure you get the best experience. Read more about our cookies here.
Accept
We have just recently launched a new version of our website. Help us to further improve by taking part in this short 5 minute survey here. here.
Never show this again