Poverty is a critical issue that is stagnating the development of Afghanistan. In 2007, more than 42% of the population of the country was reported as being below the poverty line, but until 2014, 78.2% of households even in the urban areas were still dealing with food shortages. The agriculture sector is the backbone of the country’s economy and contributes as the key sector to the revival of the well-being of people in Afghanistan. Rice is the second staple crop after wheat and plays a key role in food security, nutrition, and caloric intake. However, Afghan farmers have suffered from the low quality of grains and yield which has resulted in the serious malnutrition which is occurring in the country. Insufficient breeding techniques for new rice cultivars with high yield and acceptable quality, mismanagement of agronomical practices, and unprogressive milling and processing thus can satisfy only 50% of the country’s demand. Accordingly, Afghanistan has been compelled to import a huge annual amount of milled rice from Pakistan, India, and Iran. Although active efforts have been made by the government, research institutes, and international collaboration on rice research, production, and agricultural credits during the last 10 years, the deficit of milled rice in Afghanistan in 2018 is estimated to be 270,250 metric tons. This paper highlights the current situation of rice production in Afghanistan and suggests solutions for food security and sustainability in rice production to promote farmers’ income, consequently strengthening the country’s economy. View Full-Text
Keywords: rice; Afghanistan; cultivation; grain quality; poverty; processing; production; sustainability rice; Afghanistan; cultivation; grain quality; poverty; processing; production; sustainability
►▼ Show Figures 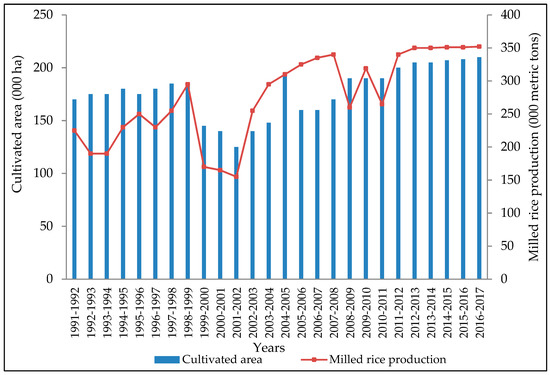