The Effects of Individual Variables, Farming System Characteristics and Perceived Barriers on Actual Use of Smart Farming Technologies: Evidence from the Piedmont Region, Northwestern Italy
Previous Article in Special Issue

Beyond Bird Feed: Proso Millet for Human Health and Environment

Proso millet (Panicum miliaceum L.), also known as common millet or broomcorn millet, is an important ancient crop mostly grown for food, feed, and fodder purposes largely in China, Russia, India, and the USA. It is an under-researched and under-utilized crop. Over 29,000 germplasm accessions have been conserved in genebanks globally. Five races (miliaceum, patentissimum, contractum, compactum, ovatum) have been recognized in proso millet based on panicle morphology and shape. The genebank at the International Crops Research Institute for the Semi-Arid Tropics conserves 849 accessions of proso millet originating from 30 countries and represents all five races. Characterization of these germplasm accessions revealed large variability for morpho-agronomic traits, including for days to 50% flowering (26 to 50 days), plant height (20 to 133 cm), and inflorescence length (22 to 400 mm). On average, the race miliaceum was tall (62 cm) with long panicles (209 mm) and ovatum had short plants (46 cm) with small panicles (108 mm). The average Gower’s distance based on 18 morpho-agronomic traits on 841 accessions was 0.261. The race miliaceum had the highest among accessions within race average pairwise distance (0.254), while the distance was the lowest in ovatum (0.192). The races miliaceum and ovatum showed the highest divergence with each other (0.275), while the lowest divergence was observed between compactum and ovatum (0.229). Trait-specific sources were identified for early maturity, tall plants, long inflorescences, and greater seed size. The information on variability and trait-specific sources identified could potentially support proso millet improvement. View Full-Text
Keywords: proso millet; germplasm; diversity; race; trait-specific sources proso millet; germplasm; diversity; race; trait-specific sources
►▼ Show Figures 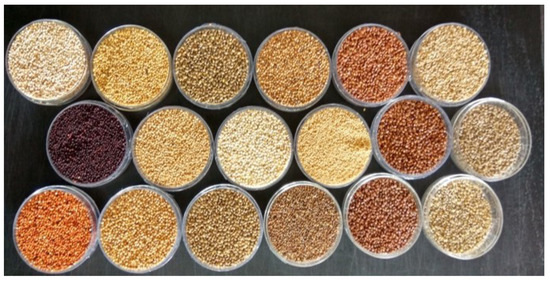