The Accra Confession as Dangerous Memory: Reformed Ecclesiology, the Ecological Crisis, and the Problem of Catholicity
Previous Article in Journal

The Virgin of the Vulnerable Lake: Catholic Engagement with Climate Change in the Philippines

In the Philippines, popular belief has it that the image of the Virgen de Caysasay was fished out of the Pansipit River in 1603. Since then, many miraculous healing events, mostly involving water, have been credited to it. The prevalence of water highlights the vulnerability of physical bodies against the onslaught of environmental destruction that comes with climate change. In the Climate Links Report on Climate Change Vulnerability (2017), it was shown that the Philippines’ agricultural and water resources are already strained due to multiple factors, including susceptibility to extreme weather conditions. Using the example of the Virgen de Caysasay, this paper examines Catholic engagement with climate change, specifically the pastoral letters of the Catholic Bishop Conference of the Philippines (CBCP) pertaining to climate change and the various responses of the faithful vis-a-vis the extreme vulnerability of the different bodies of water in the Caysasay region. I argue that, in the case of the Virgen de Caysasay, the vulnerabilities of the community—of the bodies of water and of sacred spaces by virtue of them being assigned as such due to religious practices—reveal the dissonance between what the local Catholic Church imparts and communicates through its CBCP pastoral letters on the environment to the faithful community and the realities on the ground. View Full-Text
Keywords: Philippine Catholicism; climate change; vulnerability; religion Philippine Catholicism; climate change; vulnerability; religion
►▼ Show Figures 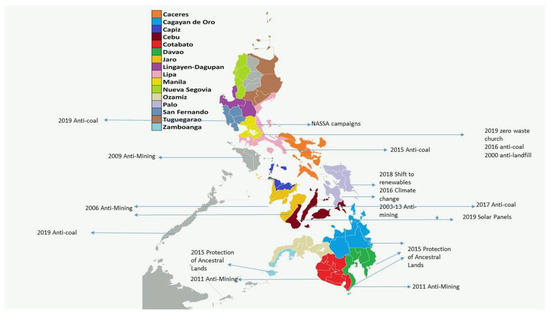