Submit to JFB Review for JFB 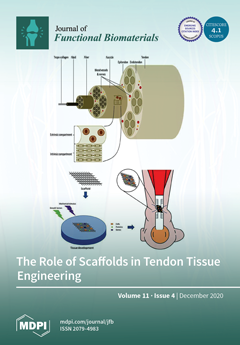 Cover Story (view full-size image): Tendon injuries represent the most frequent musculoskeletal condition in orthopedic daily practice. Biomaterials, such as scaffolds, are a major component for tissue engineering and have resulted from a marriage of disciplines including medicine, materials, and engineering. The challenge of tissue engineering is to mimic what happens in nature; thus, the ideal scaffold should represent the properties of the native tissue. View this paper
Previous Issue
Volume 11, September
Next Issue
Volume 12, March
We use cookies on our website to ensure you get the best experience. Read more about our cookies here.
Accept
We have just recently launched a new version of our website. Help us to further improve by taking part in this short 5 minute survey here. here.
Never show this again