Introduction: Many studies in stem cell biology have demonstrated that dental pulp stem cells (DPSC) may be highly proliferative and capable of pluripotent differentiation into many different tissue types. Recent advances in stem cell research have outlined methods for directing in vitro or in vivo growth, viability, and proliferation, as well as differentiation of DPSC—although much remains to be discovered. Based upon this information, the primary objective of this study was to understand the functional biomaterials needed to more effectively direct DPSC viability, growth, and proliferation. Methods: Using an approved protocol, previously collected and isolated samples of DPSC from an existing repository were used. Previously established stem cell biomarkers (Sox-2, Oct-4, NANOG) from each isolate were correlated with their proliferation rates or doubling times to categorize them into rapid, intermediate, or slow-dividing multipotent DPSC. Growth factors and other functional dental biomaterials were subsequently tested to evaluate DPSC responses in proliferation, viability, and morphology. Results: Differential responses were observed among DPSC isolates to growth factors, including vascular endothelial growth factor (VEGF) and bone morphogenic protein (BMP-2), and functional biomaterials such as mineralized trioxide aggregates (MTA). The responsiveness of DPSC isolates did not correlate with any single factor but rather with a combination of proliferation rate and biomarker expression. Conclusions: These data strongly suggest that some, but not all, DPSC isolates are capable of a robust and significant in vitro response to differentiation stimuli, although this response is not universal. Although some biomarkers and phenotypes that distinguish and characterize these DPSC isolates may facilitate the ability to predict growth, viability, and differentiation potential, more research is needed to determine the other intrinsic and extrinsic factors that may contribute to and modulate these DPSC responses to these functional biomaterials for biotechnology and bioengineering applications. View Full-Text
Keywords: dental pulp; stem cell; differentiation; biotechnology; bioengineering dental pulp; stem cell; differentiation; biotechnology; bioengineering
►▼ Show Figures 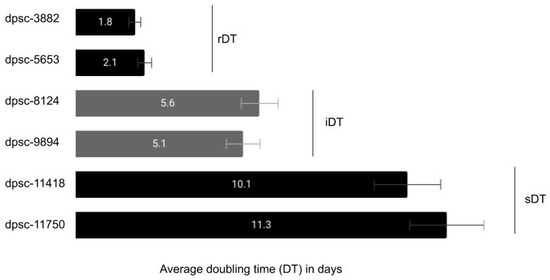