First-Principles Insight into Pd-Doped C3N Monolayer as a Promising Scavenger for NO, NO2 and SO2
Previous Article in Special Issue

Self Standing Mats of Blended Polyaniline Produced by Electrospinning

Conducting nanofibers of polyaniline (PANI) doped with camphor-10-sulfonic acid (HCSA) and blended with different polymers, such as polymethyl methacrylate (PMMA) and polyvinyl acetate (PVAc), have been fabricated using the electrospinning technique. Scanning electron microscopy (SEM) and thermal gravimetric analysis (TGA) were utilized to characterize the morphology and the thermal stability of PANI-blended fibers. An extensive study was performed to understand the copolymer influence on both the structural and surface properties of the realized conductive thin films. Samples main electrical characteristics, as conductivity, specific capacitance and electrochemical performances were tested. The better mats were obtained with the use of PVAc copolymer, which showed a conductivity value two orders of magnitude higher than the PMMA system. Aiming at further improving the electrochemical features of these blended mats, hybrid fibers based on PANI/PVAc/graphene oxide and PANI/PVAc/iron oxide were also produced and characterized. The obtained mats were potentially addressed to numerous practical fields, including sensors, health applications, smart devices and multifunctional textile materials.
Keywords: polyaniline; electrospinning; graphene oxide; iron oxide polyaniline; electrospinning; graphene oxide; iron oxide

Electrospinning is a process able to produce long fibers with a nanometric diameter [1]. During the process, due to a high applied voltage, a polymeric jet is elongated and deposited as continuous fibers over a collector. Large surface area, mechanical strength, surface functionality, flexibility and shape adaptability are some of the characteristics that make fibrous textiles interesting materials for new and traditional applications [2]. Indeed, a variety of electrospun nanofibers can be used in numerous fields, such as catalysis [3], sustainable exploitation of energy [4,5,6], energy storage [7,8], biotechnology [9], environmental engineering [10] and sensory and electronic devices [11,12,13,14,15]. To these purposes, fibers of organic, inorganic and hybrid composite materials can be easily produced and their properties opportunely tuned. In particular, the polymeric precursor, which can be of conductive or non-conductive nature, can play a pivotal role in the definition of fiber mat characteristics. When conductive polymers are electrospun, resulting fibers are endowed with superior electrical and optical properties, even comparable with those of metals and inorganic semiconductors [16], thus allowing their use in specific fields, where those properties are strictly required. Moreover, it should be also highlighted that mats or thin films in a nanofiber form have some advantages compared to bulk samples, since electrical and optical properties of thin films composites are closely related to the morphology of blended polymers, and easily tuned by the optimization of both film thickness and polymer concentration [16].
Conductive nanostructured polymers possess highly attractive characteristics, such as an easily controllable bandgap, high mechanical flexibility, anticorrosive properties and greater biocompatibility than that of many other inorganic materials. Additionally, these polymers in their neutral state have conductivity typically ranging from 10−10 to 10−5 S/cm and it can be even increased to 10−2–10−5 S/cm upon doping [17,18,19].
Among the various conductive polymers, polyaniline (PANI) is one of the most investigated because its electrical properties can be controlled by oxidation and protonation states. PANI can be found in three different forms: completely reduced (leucoemeraldine), half-oxidized (emeraldine) and completely oxidized (pernigraniline) [20,21]. The manufacturing of neat PANI nanofibers by electrospinning has been a great challenge for researchers. Production difficulties are mainly due to the poor solubility in common solvents, thus requiring proper doping with organic acids, like camphor-10-sulfonic acid (HCSA), aiming to increase its solubility and therefore the electrospinnability of the solution [21]. Furthermore, PANI is available only in the low molecular weight form and this implies an insufficient elasticity of the solution to be spun in a fiber form [22,23]. High molecular weight insulating polymers are used to make the solution more elastic. In the mixture of PANI with PEO or PS, the conductivity of blended fibers increased exponentially with the increase of the weight percent of doped polyaniline.
Yuxi et al. [24] fabricated electrospun fibers of PANI doped with HCSA blended with polyethylene oxide (PEO) or PMMA, observing that the conductivity of the PANI-blended fibers increased exponentially with the weight percent of doped polyaniline. In particular, 67% and 25% of PANI were blended with PEO and PMMA, respectively. The increase of PANI content improved the conductivity of mats but had a detrimental effect in obtaining continuous and coherent mats. In fact, the formation of beads mixed to fibers was often reported and, although numerous methods have been proposed to suppress beads formation, such as the addition of salts [25] or stabilizing agents [26], this composite morphology exhibited enhancements especially in sensor applications. PANI blended with poly(vinyl butyral) (PVB) and poly(ethylene oxide) (PEO) nanofibers, with a suitable proportion of beads, showed an improved adhesion to the electrode, a better electrical contact and improved sensing properties compared with beads’ free ones [27]. Therefore, the real challenge is the optimization of PANI-blended polymer solutions for electrospinning, to produce enhanced fibers suitable for many different applications. Recently, polyvinylpyrrolidone (PVP)/PEO/PANI multicomponent nanofibers were obtained using a special spinneret demonstrating a great potential for fibers production mainly addressed to smart textiles and sensors [28]. Obviously, the presence of non-conductive polymers changed the physical–chemical characteristics of the synthesized fibers.
As known, several parameters including process parameters (flow rate, applied voltage and distance needle tip to collector) solution properties (type and concentration of solvent, viscosity and dielectric constant) and environmental conditions (humidity and temperature) affect the fibrous morphology [11]. In this study, the effects of solution properties on the production of PANI-blended nanofibers were investigated. Two auxiliary polymers (PMMA and PVAc) were used to electrospin polyaniline. By varying their molecular weight and their concentration in the raw solution, blended systems with high polyaniline content were obtained. The choice of these copolymers was related to their macroscopic features, namely good mechanical properties, easy solubility and low cost, which made them eligible for simple fabrication of devices such as a supercapacitor, sensor, biomedical and corrosion applications [29,30]. Regarding other investigations, the novelty of this work is focused on the use of high content of PANI in blended systems, specifically designed for the electrospinning process and able to preserve PANI high electrical properties. Indeed, the possibility to obtain mats of conductive polymers will allow it to extend and improve their use in numerous innovative fields, such as health applications, smart devices and multifunctional textile materials [31].
It was found that among the two investigated polymers, the one that least depressed the conductivity characteristics of polyaniline was PVAc; furthermore, owing to improve the electrochemical features, the effect of graphene and iron oxides addition in the PANI/PVAc blended system was explored.

Doping of PANI (EB—emeraldine base) into PANI salt (ES—emeraldine salt) was performed using HCSA. First, 0.5 g of HCSA were dissolved in 20 mL of chloroform and then 0.4 g of PANI (EB) were added; the mixture was stirred for 18 h at 25 °C. Finally, HCSA-doped polyaniline (PANI-HCSA) was dried at room temperature.
PANI-HCSA (in the following indicated only as PANI) and copolymers, whose proportions are indicated in Table 1, were dissolved in chloroform under stirring for 4 h at 25 °C. Doped samples with graphene and iron oxide were obtained by adding the precursor oxides in the PANI/chloroform solution and stirred for 1 h at 25 °C. Finally, the copolymer was added and the solution stirred in the same conditions of the previously realized samples. Solutions viscosities were measured using a DVII rheometer, using a shear rate of 1 rad/s.
A 10 mL syringe coupled with a needle of 1.0 mm of diameter and a syringe pump set at a flow rate of 1.2 mL/h were used to electrospin polymer solutions. All the blended systems were homogeneous and no phase separation occurred before or during the electrospinning process. The electric field was generated using a high voltage supply. Fibers were synthesized using an applied voltage of 12.5 kV and a needle-to-collector distance of 15 cm and collected on aluminum foils. The electrospinning process was performed at 25 °C and with a relative humidity of 30%. A summary of the realized samples is reported in Table 1.

Scanning electron microscopy (SEM) images were registered using a Phenom X-Pro microscope (Deben, Suffolk, UK) [32]. Samples were pasted on a copper foil and analyzed under an accelerating voltage of 5, 10 and 15 kV.
Thermogravimetric analysis and differential scanning calorimetry (TGA-DSC) were used to probe the thermal stability of the electrospun nanofibers. All measurements were performed using 10 mg of the sample under an inert atmosphere, from room temperature to 1000 °C with a heating rate of 10 °C/min. All experiments were performed twice, yielding similar results.
DC conductivity (σ) measurements were performed on freshly prepared samples (at least five samples), using a homemade device consisting of a counter electrode (CE) of platinum and a silver/silver chloride (Ag/AgCl) electrode as the reference electrode. Before and after carrying out conductivity measurements all samples were observed by electron microscopy to confirm that the measurement procedure did not affect fibers’ morphologies. The electrochemical impedance of samples was measured using the experimental set-up illustrated in Figure S1, with a three-electrode configuration, using an AMEL7050 (Milano, Italy) potentiostat-galvanostat coupled with AMEL7200 (Milano, Italy) frequency response analyzer. Work electrode (WE) was made using a bakelite base on which polymer fibers were fixed. Platinum wire was used as the counter electrode (CE) and silver/silver chloride (Ag/AgCl) electrode was used as reference. A 0.1 M ammonium acetate aqueous solution was used as an electrolyte. Electrochemical impedance spectroscopy (EIS) measurements were registered with a frequency range between 700 kHz and 100 Hz with an AC signal of 5 mV amplitude.

The effects of solution properties on the production of PANI-blended nanofibers by electrospinning were investigated. In particular, PMMA and PVAc were employed to improve PANI processability. An in-depth study was performed in order to understand their influence on both the structural and surface properties of the realized conductive thin films. Samples main electrical characteristics, as conductivity, specific capacitance and electrochemical performances were tested and discussed. The obtained mats were potentially addressed to numerous practical applications, including smart textiles, active sensors layers and electronic devices, such as supercapacitors.
This preliminary investigation reveals the following results:

Authors thank Stefano Linari and Simone Gaetani of the Linari Srl company for the instrumentation set-up. 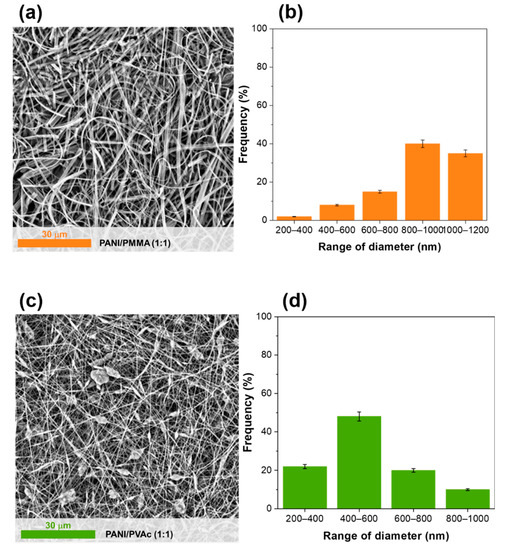 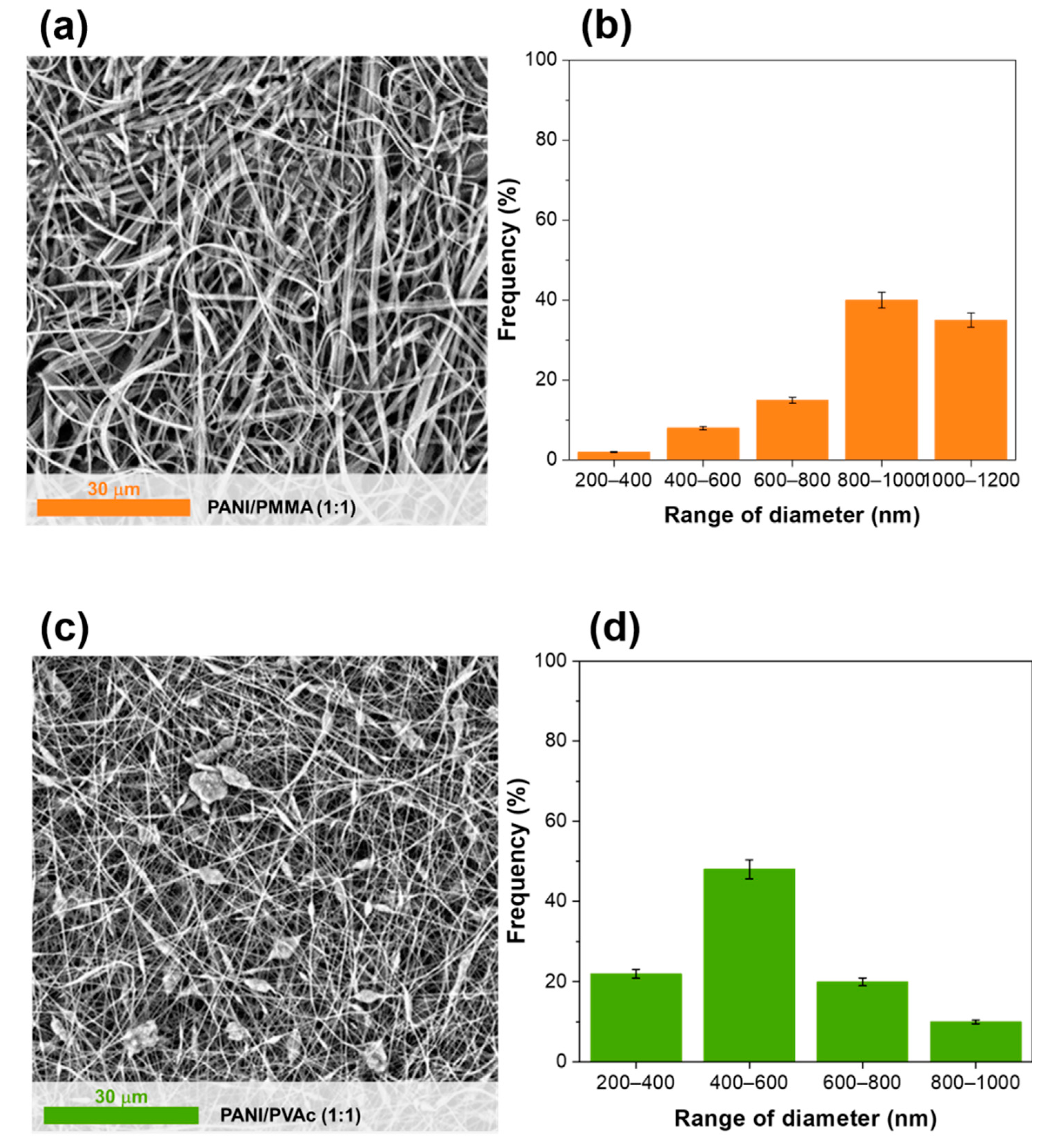 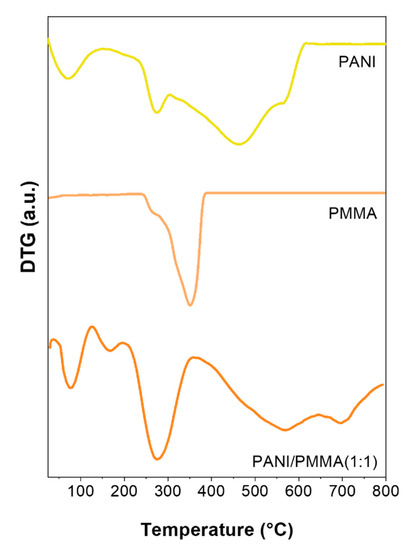 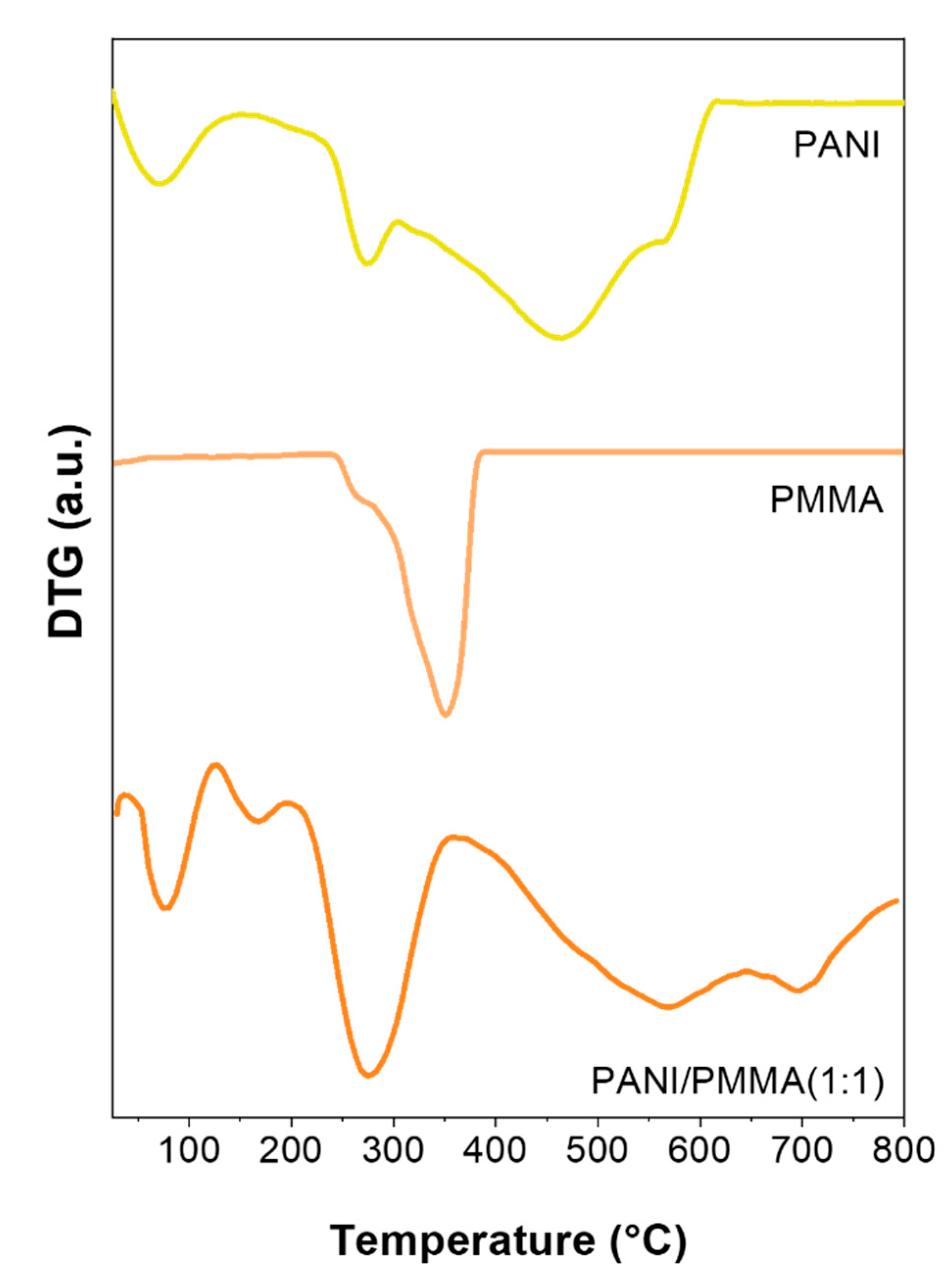 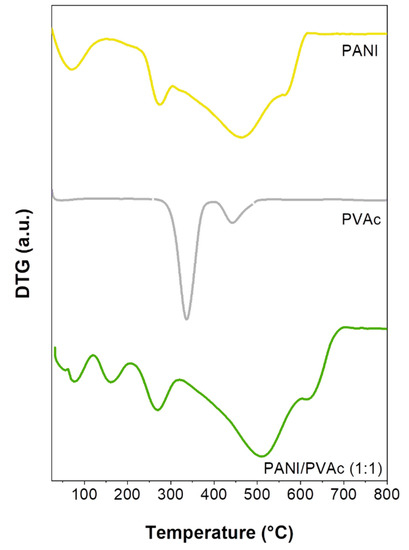 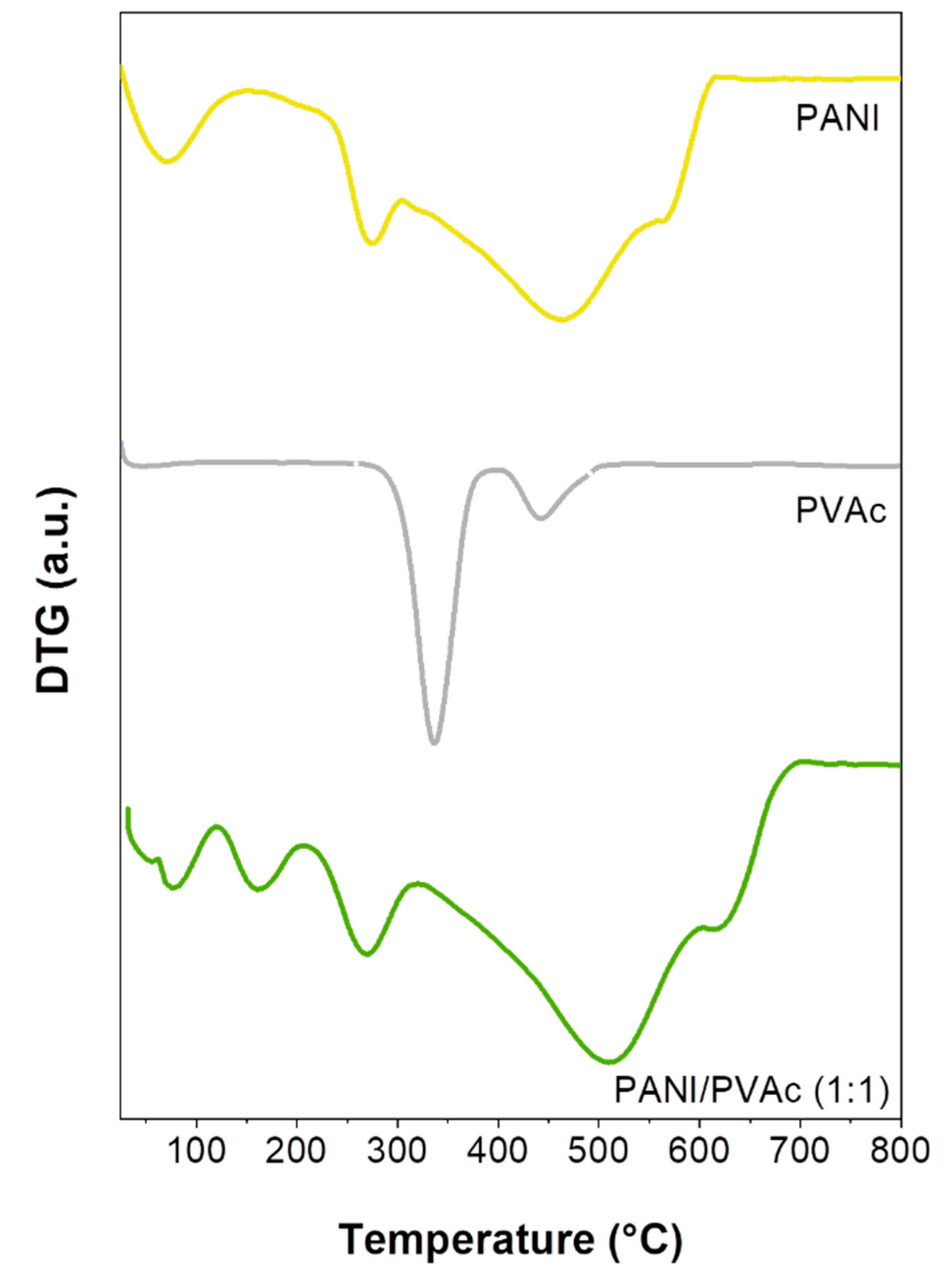 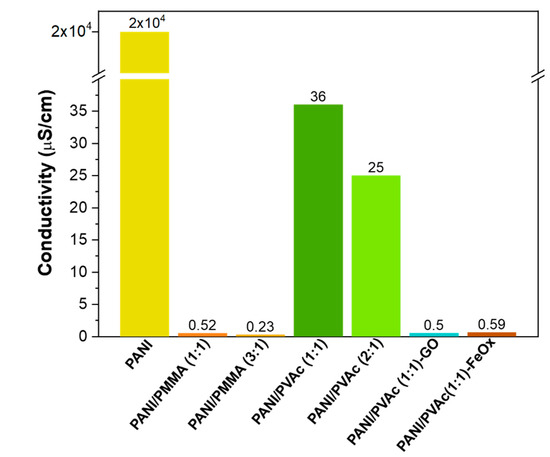 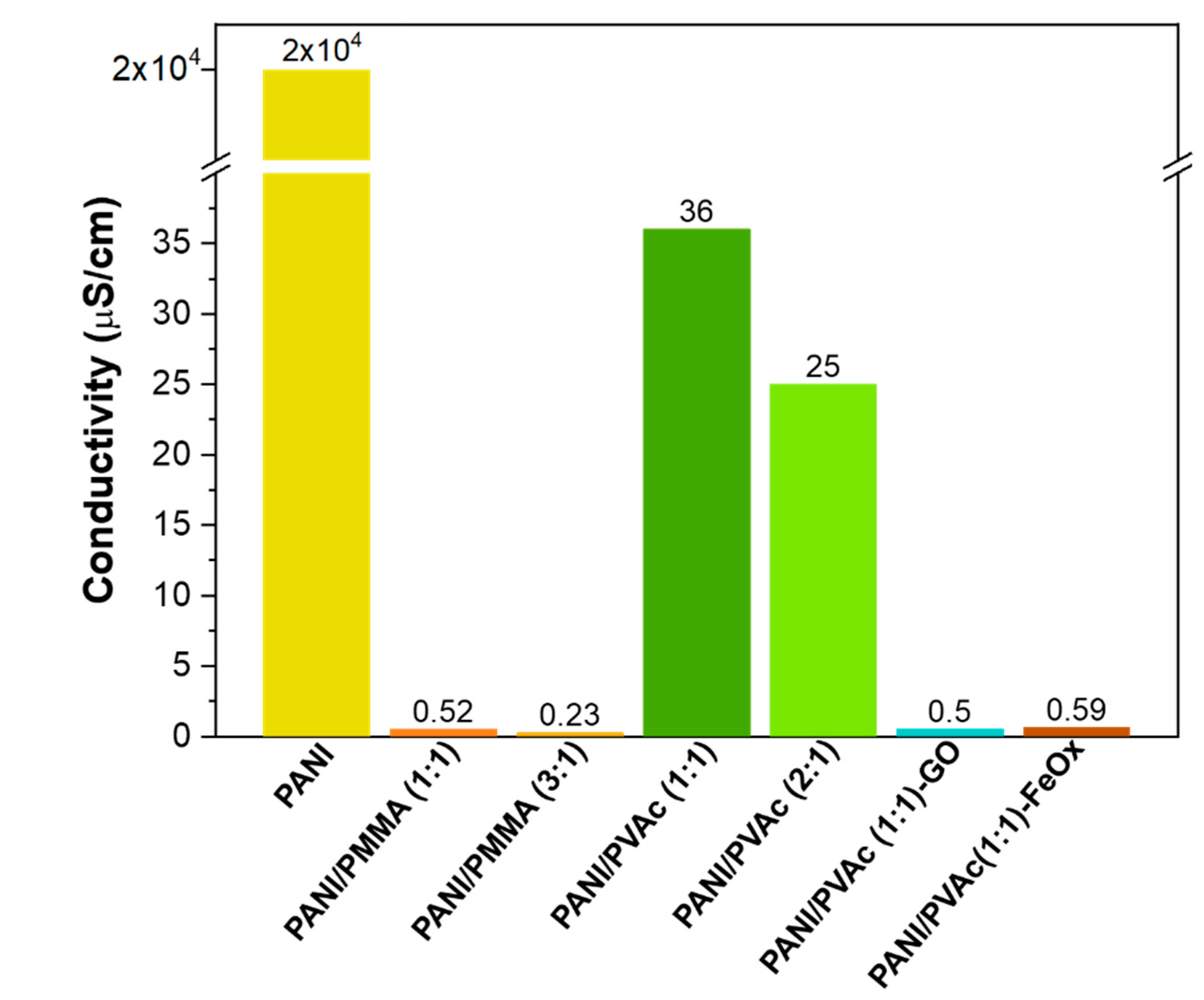 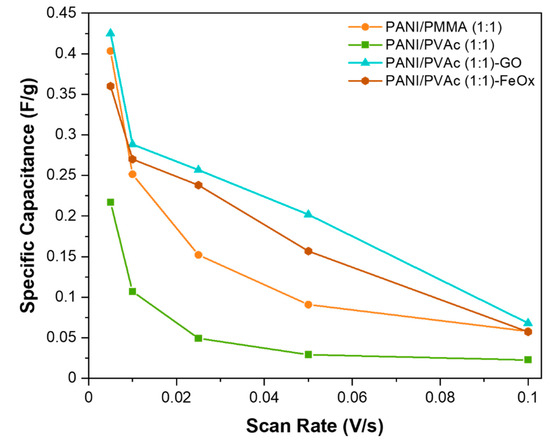 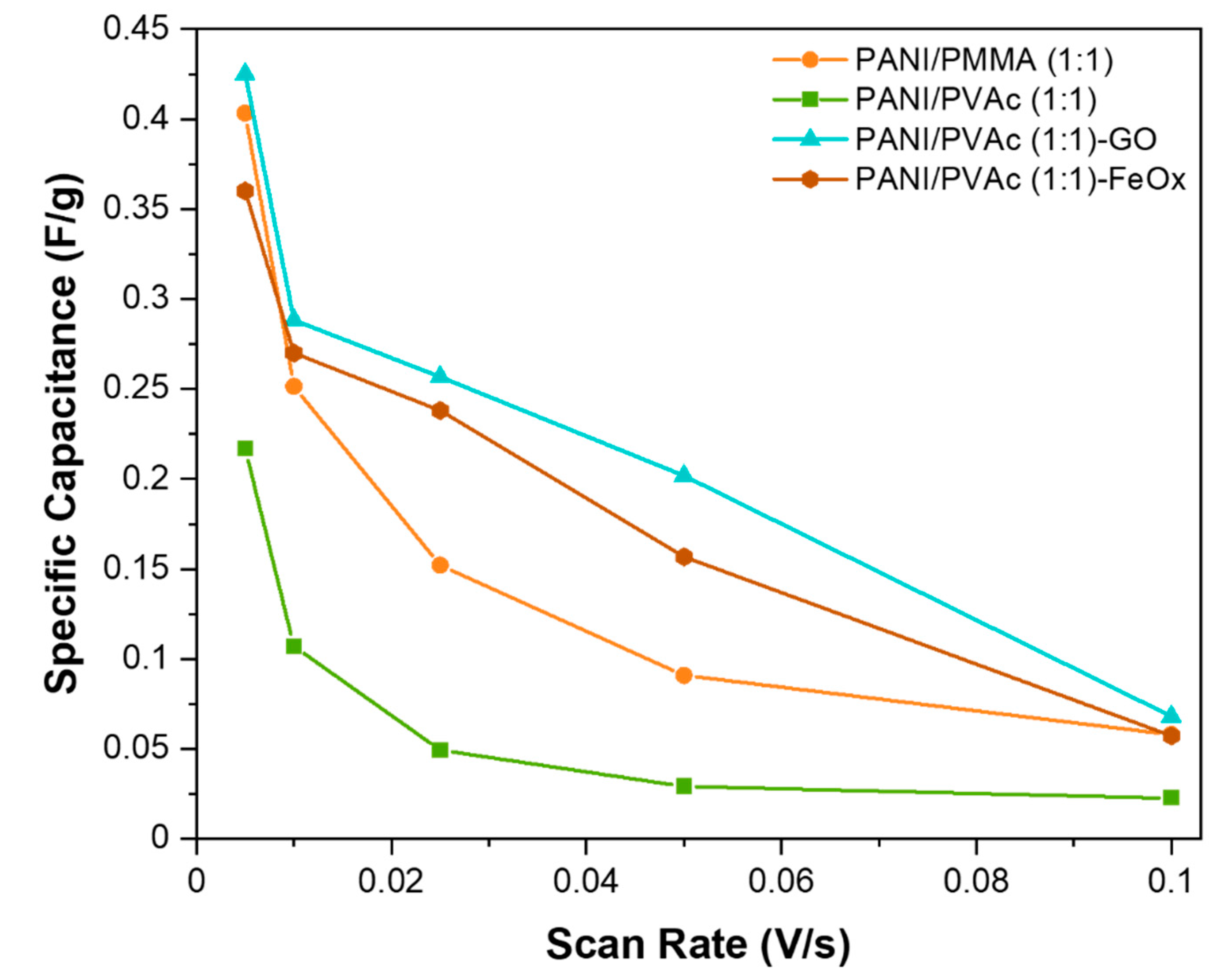 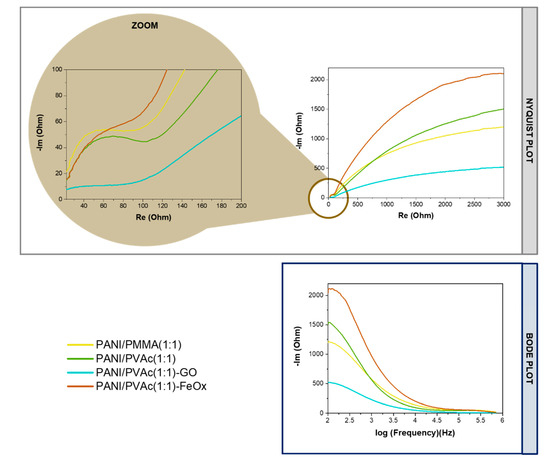 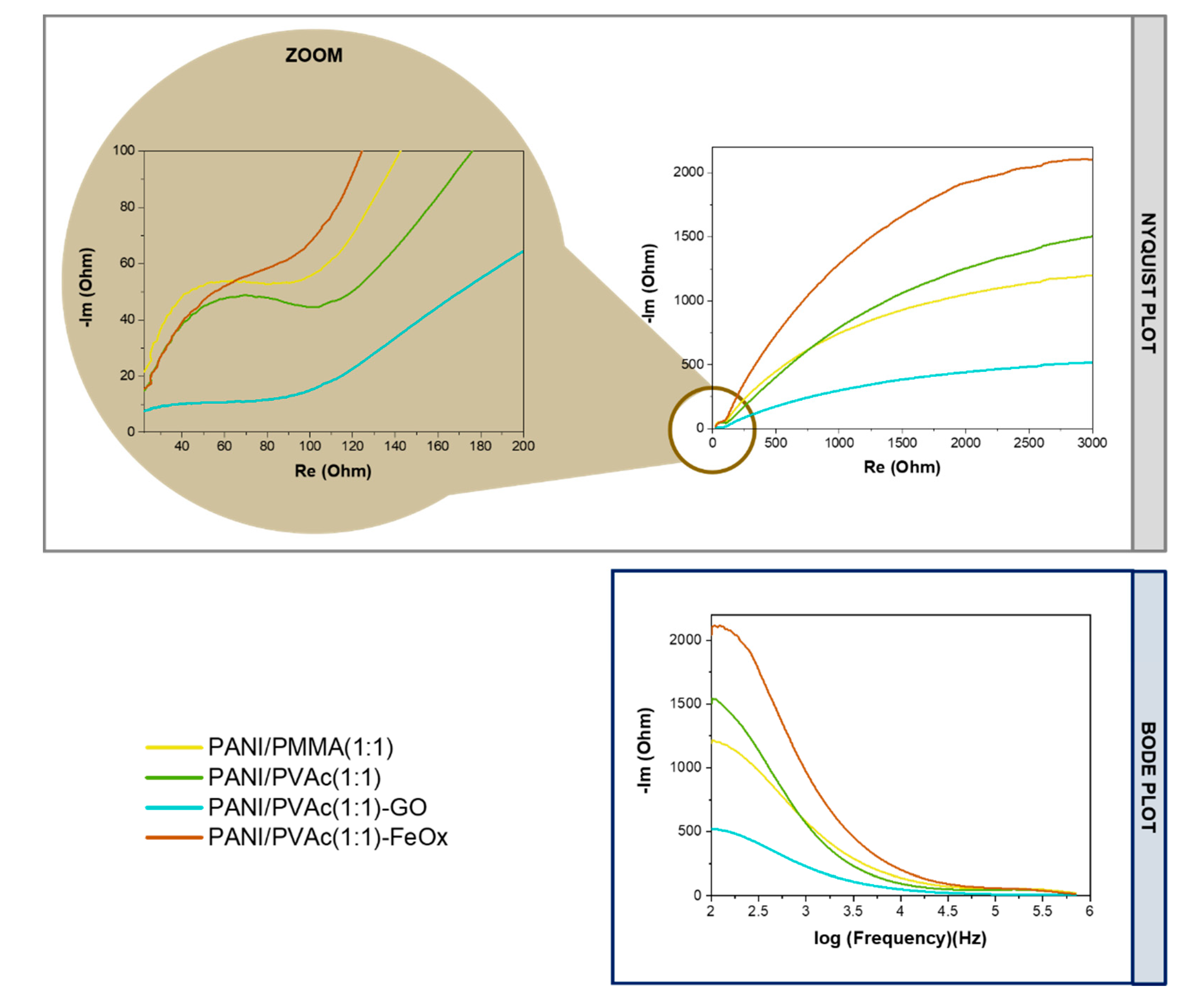 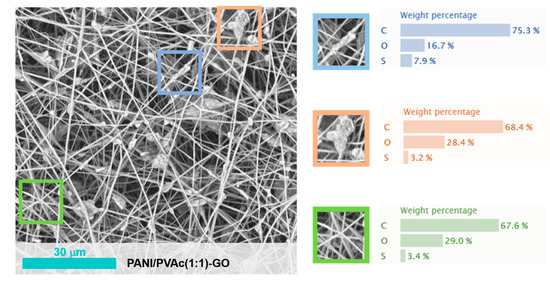 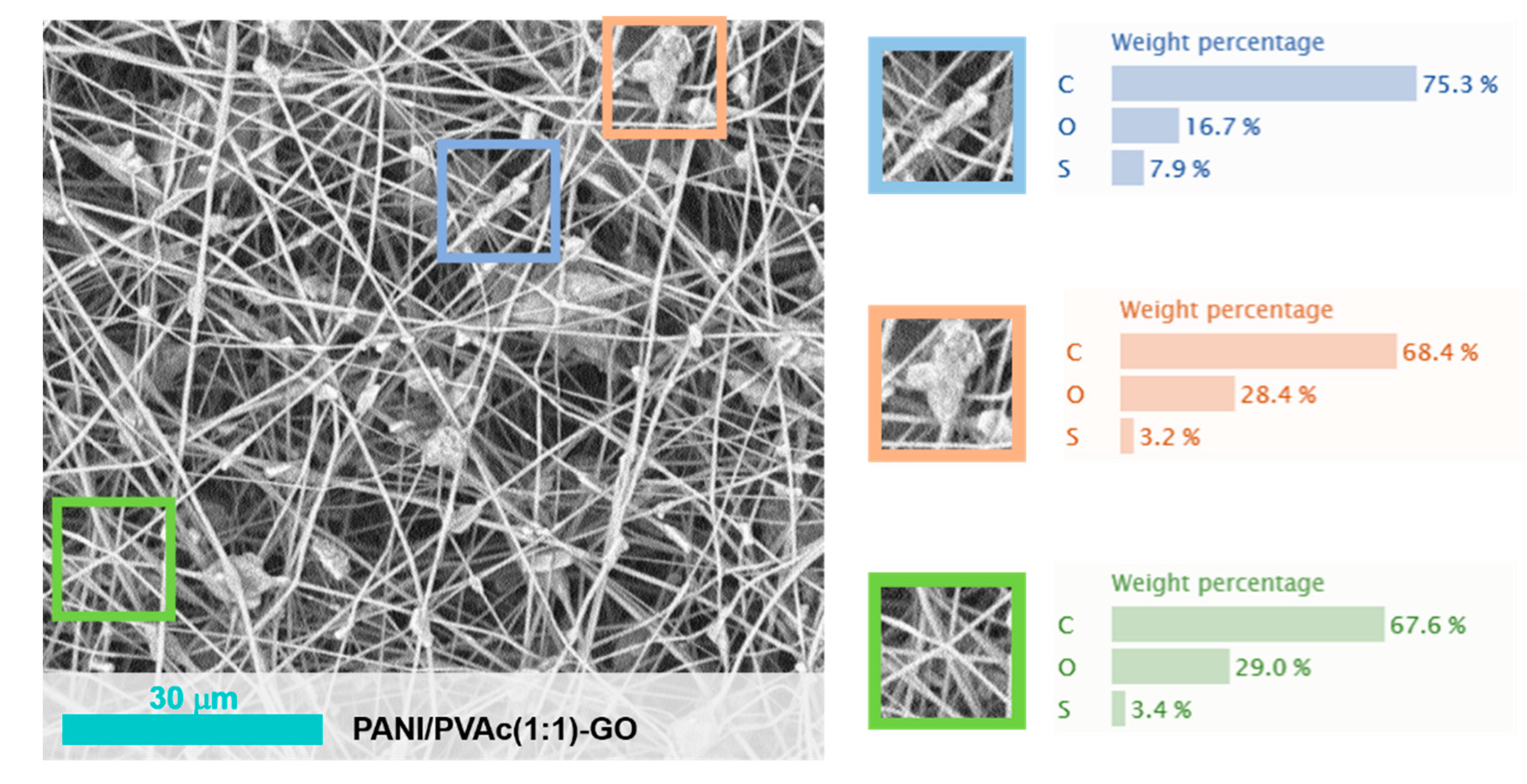