Sorting out the Superbugs: Potential of Sortase A Inhibitors among Other Antimicrobial Strategies to Tackle the Problem of Antibiotic Resistance
Previous Article in Journal

Resveratrol has been extensively studied due to its potential health benefits in multiple diseases, for example, cancer, obesity and cardiovascular diseases. Besides these properties, resveratrol displays inhibitory activity against a wide range of bacterial species; however, the cellular effects of resveratrol in bacteria remain incompletely understood, especially in the human pathogen, Staphylococcus aureus. In this study, we aimed to identify intrinsic resistance genes that aid S. aureus in tolerating the activity of resveratrol. We screened the Nebraska Transposon Mutant Library, consisting of 1920 mutants with inactivation of non-essential genes in S. aureus JE2, for increased susceptibly to resveratrol. On agar plates containing 0.5× the minimum inhibitory concentration (MIC), 17 transposon mutants failed to grow. Of these, four mutants showed a two-fold reduction in MIC, being the clpP protease mutant and three mutants with deficiencies in the electron transport chain (menD, hemB, aroC). The remaining 13 mutants did not show a reduction in MIC, but were confirmed by spot-assays to have increased susceptibility to resveratrol. Several genes were associated with DNA damage repair (recJ, xerC and xseA). Treatment of S. aureus JE2 with sub-inhibitory concentrations of resveratrol did not affect the expression of recJ, xerC and xseA, but increased expression of the SOS–stress response genes lexA and recA, suggesting that resveratrol interferes with DNA integrity in S. aureus. Expression of error-prone DNA polymerases are part of the SOS–stress response and we could show that sub-inhibitory concentrations of resveratrol increased overall mutation frequency as measured by formation of rifampicin resistant mutants. Our data show that DNA repair systems are important determinants aiding S. aureus to overcome the inhibitory activity of resveratrol. Activation of the SOS response by resveratrol could potentially facilitate the development of resistance towards conventional antibiotics in S. aureus. View Full-Text
Keywords: Staphylococcus aureus; resveratrol; intrinsic resistance; DNA damage; SOS response Staphylococcus aureus; resveratrol; intrinsic resistance; DNA damage; SOS response
►▼ Show Figures 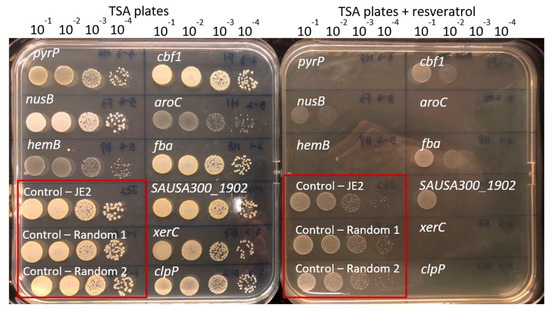