Drivers of Broad-Spectrum Antibiotic Overuse across Diverse Hospital Contexts—A Qualitative Study of Prescribers in the UK, Sri Lanka and South Africa
Next Article in Special Issue

Implementation of Antibiotic Stewardship in a University Hospital Setting

Antibiotic stewardship may be defined as a set of measures leading to rational antibiotic therapy based on the adequate selection of antibacterial agents, appropriate duration of their administration and a suitable route of administration [1,2,3,4]. The need for antibiotic stewardship implementation stems from the likely prospect of antibiotics losing their effectiveness and thus their ability to treat bacterial infections [5,6,7]. The increasing prevalence of bacteria resistant to antibacterial drugs, mainly those producing extended-spectrum beta-lactamases including metallo-beta-lactamases and carbapenemases opens the possibility of a new non-antibiotic era in which adequate antibiotics will be unavailable to treat infections caused by multidrug-resistant bacteria [8,9]. To prevent this, antibiotic stewardship programs have been developed as comprehensive systems comprising a range of activities that may be briefly characterized as follows:
It must be stressed, however, that the scope of antibiotic stewardship is much broader, involving numerous other activities that are also very important for adequate antibiotic therapy and preventing the spread of multidrug-resistant bacteria. These activities may be described as follows:
At the University Hospital Olomouc, Czech Republic, antibiotic stewardship is coordinated by the Antibiotic Center, a section of the Department of Microbiology. Based on analyses of the development of bacterial resistance and antibiotic consumption, including the overall costs of this group of drugs, recommendations for initial antibiotic therapy and prophylaxis are formulated and quarterly presented to the hospital management who subsequently approve these recommendations and make them valid.
The article describes efforts of the Antibiotic Center and presents outcomes of its activity over a period of 10 years (2010–2019).

2.1. Characteristics of the Healthcare Facility

The University Hospital Olomouc is one of the largest inpatient healthcare facilities in the Czech Republic, dating back to 1896. It is part of a network of nine teaching hospitals directly controlled by the Ministry of Health of the Czech Republic. Basic data on the facility are shown in Table 1.

A computerized database of the hospital’s Department of Pharmacology was used to obtain data on antibiotic consumption during the study period. The data were processed according to the 2020 ATC/DDD system and expressed as numbers of defined daily doses for various antibiotic classes [11]. Antibiotic consumption was analyzed for both the entire hospital and its Department of Anesthesiology and Intensive Care Medicine with 25 intensive care beds.

2.4. Identification of Bacteria and Determination of Their Susceptibility/Resistance to Antibacterial Agents

Bacterial pathogens (Escherichia coli, Klebsiella pneumoniae, Pseudomonas aeruginosa, and Staphylococcus aureus) were isolated from clinical samples (tracheal secretion, bronchoalveolar lavage fluid, sputum, blood, urine, pus, puncture samples, wound secretion, bile, cerebrospinal fluid) obtained from hospitalized patients with a suspected bacterial infection. For each patient, only the first isolate from particular clinical samples was included.
The identification of bacteria was performed by MALDI-TOF MS (Biotyper Microflex, Bruker Daltonics, Bremen, Germany) [12].
The susceptibility/resistance to antibiotics was tested using a broth microdilution method according to the EUCAST [10]. The following reference strains were used as quality control organisms: Escherichia coli ATCC 25922, Pseudomonas aeruginosa ATCC 27853 and Staphylococcus aureus ATCC 29213. All strains of Staphylococcus aureus were also tested for the resistance to methicillin using selective diagnostic chromogenic media (Colorex/TM/MRSA, TRIOS, Prague, Czech Republic) and an immunochromatographic assay for the detection of PBP2a (PBP2a SA Culture Colony Test, AlereTM, Abbott, Prague, Czech Republic). The production of beta-lactamases, such as ESBL and AmpC, was detected by phenotypic tests [13]. The production of carbapenemases was detected by the Carba NP test [14].
Additionally, methicillin-resistant Staphylococcus aureus (MRSA) strains isolated from the Department of Anesthesiology and Intensive Care Medicine patients were confirmed by the mecA gene detection [15]. The production of ESBL and AmpC beta-lactamases in Escherichia coli and Klebsiella pneumoniae was confirmed by PCR detection of the bla genes only in pre-defined groups of strains/patients from above mentioned department (from tracheal aspirates in patients with hospital-acquired pneumonia, from stool in hospitalized patients etc.) [13]. The search for potential production of carbapenemases in the meropenem-resistant Klebsiella pneumoniae strains at this department was carried out by simplex PCR with primers targeting blaFRI, blaGES, blaGIM, blaIMI, blaIMP, blaKPC, blaNDM, blaVIM, blaOXA-23 and blaOXA-48. Detailed information on the primers is listed in Table 2. PCR assays were performed on Rotor-Gene TM 6000 (Corbett Research, Mortlake, Australia). PCR was run in a final volume of 25 µL using 100 ng of DNA template, 0.5 μM of forward and reverse primers, 200 μM of each dNTP, 2.5 mM of MgCl2 and 1.25 U Combi Taq Polymerase (Top-Bio, Vestec, Czech Republic) in 1× Buffer (Top-Bio, Vestec, Czech Republic). The PCR conditions were as follows: initial denaturation at 94 °C for 3 min, followed by 30 cycles at 94 °C for 30 s, 72 °C for different times (45 s to 60 s) with a final extension at 72 °C for 10 min. PCR products were then separated on a 1% agarose gel containing SYBR Safe (Invitrogen) and visualized on a UV transilluminator. Bacterial isolates for genetic analysis were stored in cryotubes at −80 °C (Cryobank B, ITEST, Hradec Králové, Czech Republic).

Trends in the consumption of antibacterial agents, or antibiotic classes, bacterial resistance and their relationships were analyzed with Spearman’s correlation. The data were processed with IBM SPSS Statistics 22 (Armonk, NY, USA).

The presented data suggest low rates of bacterial resistance at the University Hospital Olomouc, with the only exception being an increased prevalence of meropenem-resistant strains of Pseudomonas aeruginosa. This confirms the importance of antibiotic stewardship and surveillance of antimicrobial resistance, including the use of molecular biology methods, for maintaining the effectiveness of antibiotics and limiting the spread of multidrug-resistant bacterial pathogens. Data on the prevalence of bacterial resistance and the results of molecular genetic analysis of multidrug-resistant strains must form the basis for practical antibiotic stewardship. These should include a definition of optimal regimens for initial antibiotic therapy and assessment of the sources and routes of spread of multidrug-resistant bacteria so that adequate hygiene and epidemiological measures may be introduced. It is apparent that besides obtaining data for the entire hospital, hospital departments need to be individually assessed and adequate antibiotic stewardship measures must be implemented based on the results. 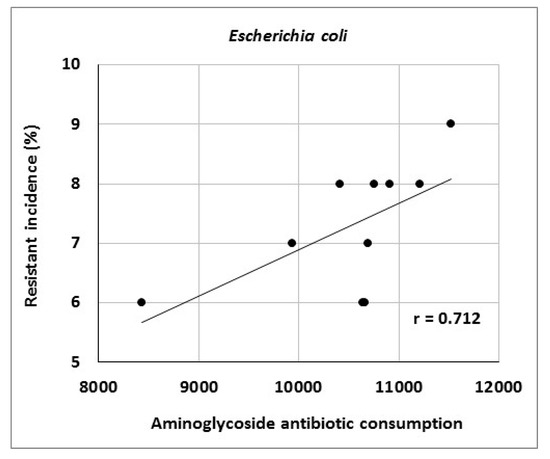 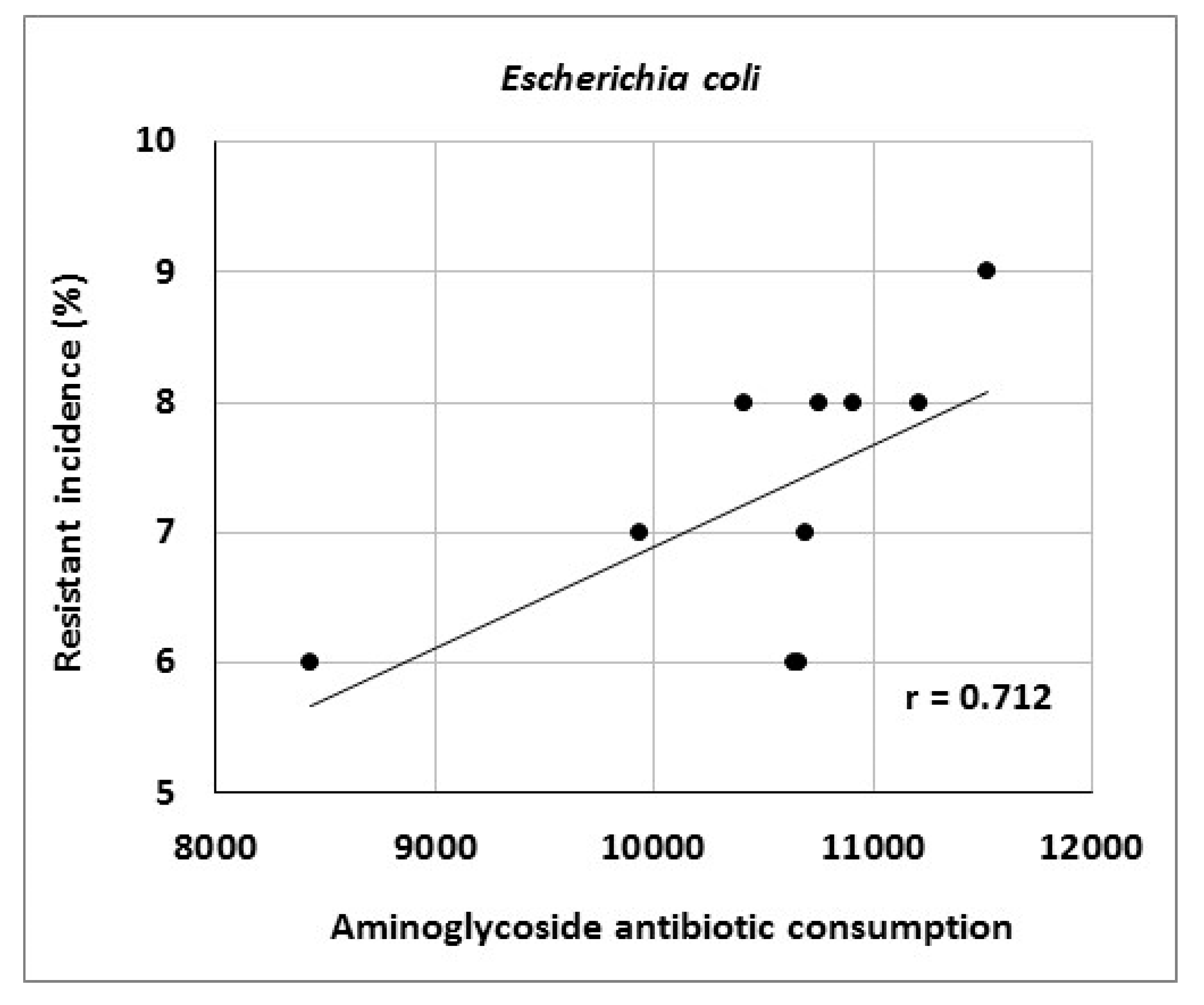 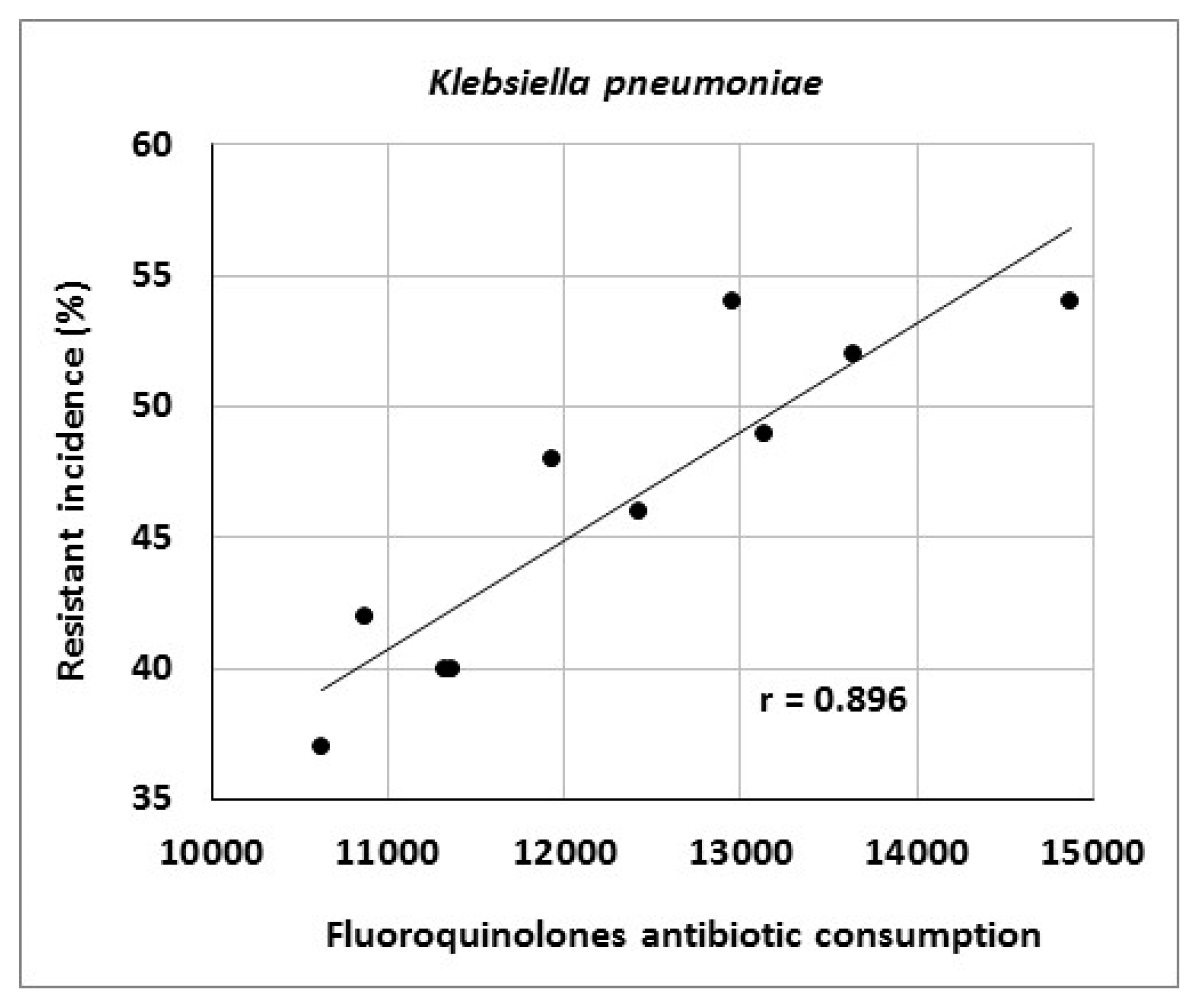 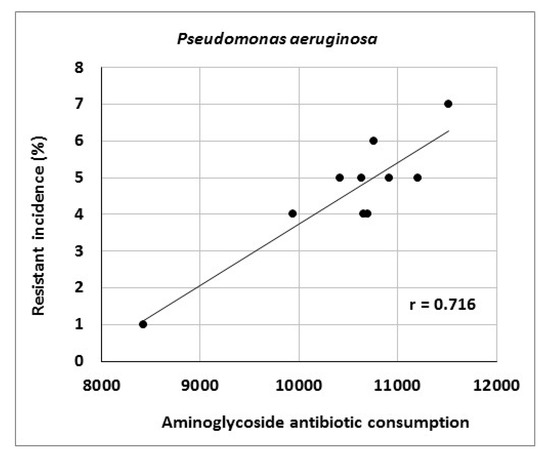 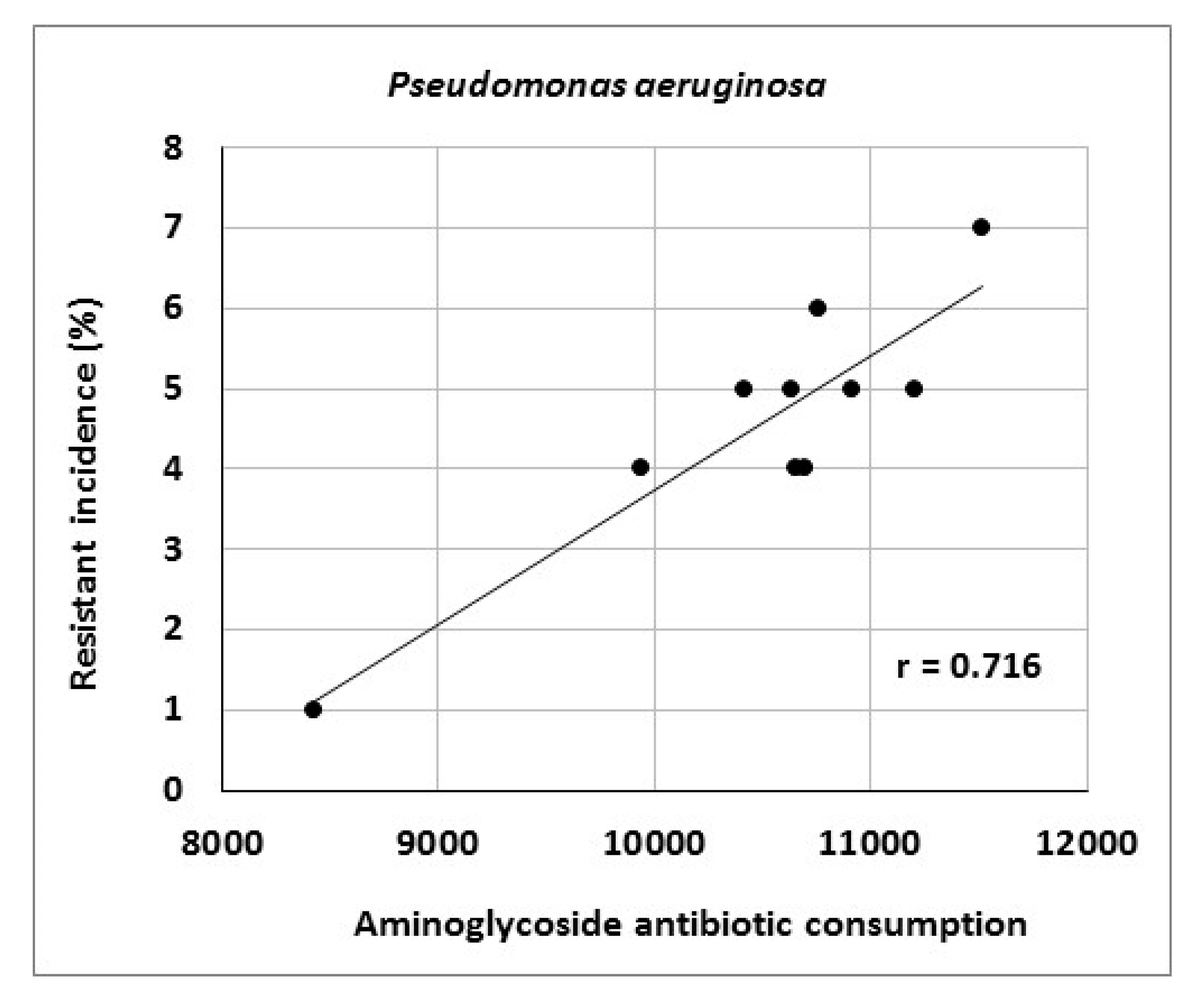 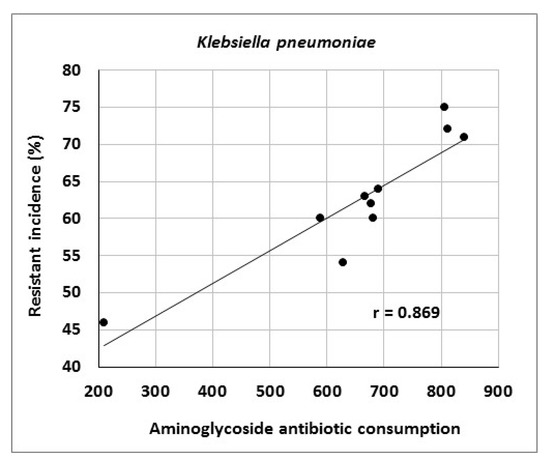 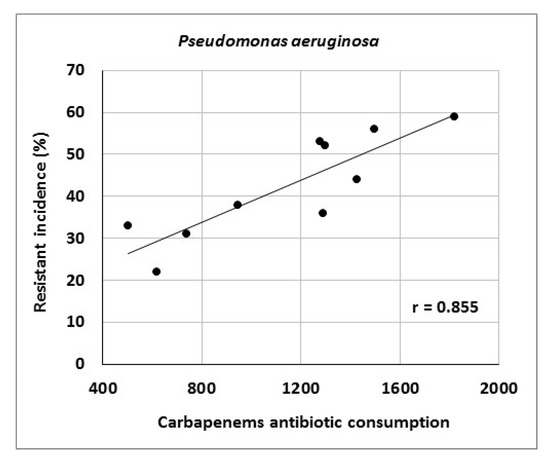 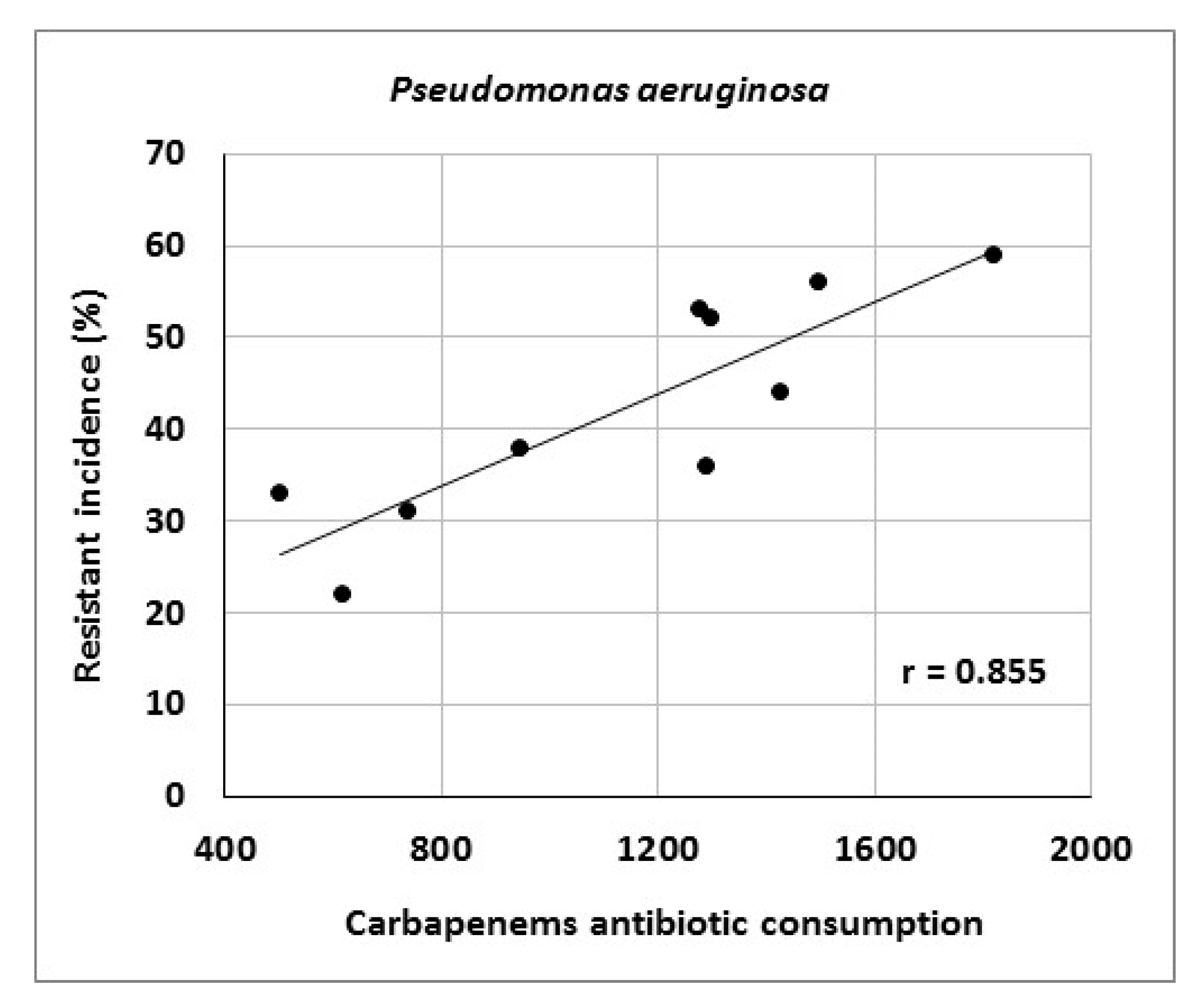