Clonal Lineages, Antimicrobial Resistance, and PVL Carriage of Staphylococcus aureus Associated to Skin and Soft-Tissue Infections from Ambulatory Patients in Portugal
Next Article in Special Issue

Shiga toxin-producing Escherichia coli (STEC) is an enteric pathogen associated with human gastroenteritis outbreaks. Extensive use of antibiotics in agriculture selects resistant bacteria that may enter the food chain and potentially causes foodborne illnesses in humans that are less likely to respond to treatment with conventional antibiotics. Due to the importance of antibiotic resistance, this study aimed to investigate the combination of phenotypic and genotypic antibiotic resistance in STEC isolates belonging to serogroups O26, O45, O103, O104, O111, O121, O145, and O157 using disc diffusion and polymerase chain reaction (PCR), respectively. All strains were phenotypically resistant to at least one antibiotic, with 100% resistance to erythromycin, followed by gentamicin (98%), streptomycin (82%), kanamycin (76%), and ampicillin (72%). The distribution of antibiotic resistance genes (ARGs) in the STEC strains was ampC (47%), aadA1 (70%), ere(A) (88%), blaSHV (19%), blaCMY (27%), aac(3)-I (90%), and tet(A) (35%), respectively. The results suggest that most of the strains were multidrug-resistant (MDR) and the most often observed resistant pattern was of aadA1, ere(A), and aac(3)-I genes. These findings indicate the significance of monitoring the prevalence of MDR in both animals and humans around the globe. Hence, with a better understanding of antibiotic genotypes and phenotypes among the diverse STEC strains obtained, this study could guide the administration of antimicrobial drugs in STEC infections when necessary. View Full-Text
Keywords: antibiotic resistance; phenotypes; genotypes; Shiga toxin-producing Escherichia coli; PCR antibiotic resistance; phenotypes; genotypes; Shiga toxin-producing Escherichia coli; PCR
►▼ Show Figures 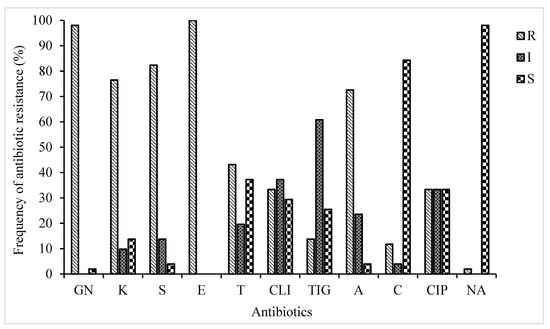