The current rise of multidrug-resistant (MDR) Gram-negative Enterobacteriaceae including the extended-spectrum β-lactamase (ESBL)-producing organisms and carbapenem-resistant Enterobacteriaceae (CRE) has been increasingly reported worldwide, posing new challenges to health care facilities. Accordingly, we evaluated the impact of multimodal infection control interventions at one of the major tertiary healthcare settings in Egypt for the aim of combating infections by the respective pathogens. During the 6-month pre-intervention period, the incidence rate of CRE and ESBL-producing clinical cultures were 1.3 and 0.8/1000 patient days, respectively. During the post-intervention period, the incidence of CRE and ESBL producers continued to decrease, reaching 0.5 and 0.28/1000 patient days, respectively. The susceptibility rate to carbapenems among ESBL producers ranged from 91.4% (ertapenem) to 98.3% (imipenem), amikacin (93%), gentamicin (56.9%), and tobramycin (46.6%). CRE showed the highest resistance pattern toward all of the tested β-lactams and aminoglycosides, ranging from 87.3% to 94.5%. Both CRE and ESBL producers showed a high susceptibility rate (greater than 85.5%) to colistin and tigecycline. In conclusion, our findings revealed the effectiveness of implementing multidisciplinary approaches in controlling and treating infections elicited by CRE and ESBL producers.
Keywords: CRE; ESBL producers; infection prevention and control measures; tertiary healthcare setting CRE; ESBL producers; infection prevention and control measures; tertiary healthcare setting

Globally, multidrug-resistant (MDR) organisms are considered to be one of the major public health issues within healthcare settings [1]. Infections with MDR organisms or the rising, extensive, drug-resistant Gram-negative bacteria including the carbapenem-resistant Enterobacteriaceae (CRE) and extended-spectrum β-lactamase (ESBL) producers remain the most challenging. This is because of their limited treatment options, their rapid spread among healthcare environments causing outbreaks associated with high mortality rates and their associated prolonged hospital stays with a high economic burden [2,3,4]. It is also estimated that by 2030, more than half of Klebsiella pneumoniae and Escherichia coli will be resistant to third-generation cephalosporins [5]. Additionally, the widespread distribution of Enterobacteriaceae in nature and gastrointestinal tracts has facilitated their extensive spread among the ecosystem, causing community and hospital-acquired infections [6,7]. Additionally, prior hospitalization with a prolonged stay and underlying disease conditions makes patients vulnerable to infections [8]. Consequently, preventing the spread of MDR is a major health issue that requires instant efforts to rapidly react against the deadly superbugs. To enable the containment of MDR Gram-negative pathogens (GNP), early detection of CRE—especially for carbapenemase producers and ESBL producers—through targeted patient screening, infection prevention and control measures (IPC) and applying antimicrobial stewardship programs were of proven value for weakening the impact of resistant pathogens among healthcare settings [9,10]. For earlier recognition of the colonization state that usually precedes or co-exists with MDR Gram-negative bacteria, rectal surveillance cultures were examined. Such active surveillance programs play a pivotal role in identifying high-risk patients for developing subsequent infections and shed a light on the importance of earlier implantation of IPC measures [11]. The application of core IPC, including antimicrobial stewardship programs, contact precautions, environmental cleaning and staff education should be applied to minimize the risk of MDR spread between or within health care settings [11,12]. Moreover, MDR carriers, especially CRE, should be accommodated in isolated rooms whenever possible [13]. Therefore, the aim of this study was to evaluate the effect of applying the core IPC measures on the incidence rate of MDR GNP-associated infections including CRE and ESBL producers in one of the major tertiary healthcare settings in Egypt, with the aim of combating these nightmare pathogens.

A prospective study was conducted at the International Medical Center (IMC) from July 2017 to June 2019 to screen carriers or patients infected with ESBL-producing Gram-negative pathogens and CRE. The IMC is an acute care, tertiary hospital with around 800 beds, 10 different ICUs and 3 different wards (oncology, surgical and medical). Authorized members of an infection control team were assigned to collect the microbiological records including the identified culture with its sensitivity pattern from different clinical specimens, including blood, sputum, urine and wound swabs among all ICUs and wards of IMC. The study protocol was reviewed and approved by the institutional ethics committee, Faculty of Pharmacy, Ain Shams University (ENREC-ASU-2018-72). This study was conducted in accordance with the ethical principles stated in the Declaration of Helsinki.

Rectal swab specimens were collected within 48 hours of ICU admission to assess bacterial colonization from 253 studied participants over a period of 6 months, from July 2017 to December 2017. Swabs were inserted 1 cm into the rectum and then rotated 360°. Amies transport medium was used for immediate transformation for further laboratory analysis. For the rapid detection of CRE and ESBL producers from potentially colonized rectal specimens, the HB&L carbapenemase and ESBL producers-AmpC kits (Alifax, Padua, Italy) were used, respectively. Kits were read by a ALIFAX microbiology line analyzer (Alifax, Padua, Italy) that depends on laser-scattering technology for the automatic detection and enumeration of tested broth vials. Briefly, the laser beam passes through a glass bottle containing the reagent (HB&L carbapenamase or ESBL producers-AmpC) in addition to the specimen and a selective supplement broth that contain certain antibacterial and antifungals agents. For CRE and ESBL detection, the broth was combined with carbapenem and certain 3rd-generation cephalosporins, respectively, to inhibit non-carbapenem resistant Enterobacteriaceae spp. and non-ESBL. The patented technology enabled us to monitor real-time growth curves and positive or negative results were reported based on a calculation of colony-forming unit per mL. As recommended by the manufacturer, we have used the automated system, Vitek-2 (bioMérieux, Marcy L’Etoile; Lyon, France) for the identification and detection of antimicrobial breakpoints.
By definition, the tested strains were considered MDR if they displayed resistance to 3 or more antimicrobial classes, i.e., susceptible to not more than 1 of the following classes by disk diffusion method: aminoglycosides (10 µg), carbapenems (10 µg), cephalosporins (30 µg), fluoroquinolones (5 µg) or penicillin (10 µg) [38]. Susceptibility to polymyxins, sulbactam, sulfonamides and tetracycline were not considered in the definition. The rate of MDR organisms was calculated monthly by dividing the number of MDR by the total number of patient days and multiplying by 1000 [39]. Admitted persons were classified into colonized and cases with infections according to previously published literature [40]. Infections with CRE and ESBL producers were defined as the detection of Enterobacteriaceae isolates resistant to carbapenem antibiotics and 3rd-generation cephalosporins, respectively, with additional signs and symptoms of infection as determined by the clinicians. Detected infection from days 1–3 upon IMC admission was counted as community-acquired (CAIs), while later detections counted as hospital-acquired (HAIs) [41]. The recovered bacterial isolates were tested for susceptibility to the antimicrobial agents recommended by the Clinical and Laboratory Standards Institute (CLSI, 2018) for each bacterial species [42].

4.3.1. Extraction of Chromosomal DNA from CRE and ESBL Producers

A multidisciplinary team approach, including an infection control department, microbiology laboratory and clinical pharmacy was necessary to develop and implement strategies to control the spread of CRE and ESBL producers among the hospital settings. A pilot study was undertaken for 6 months from July 2017 to December 2017 and a prospective period from January 2018 to August 2019. The following core IPC measures were implemented during the pilot study and enhanced during the second part of the study.

The infection control team had trained, monitored and provided feedback on hand hygiene and the use of gloves and gowns [52,53]. In case of carriage or infection with CRE, patient and staff cohorting were applied and such patients were preferably placed in a single room [54,55].

The infection control team checked that beds and the surroundings were disinfected by chloride detergents. Cultures from different surfaces were randomly taken 2 times during the pilot study [56]. On a daily basis, the new checklist containing all items in the devices bundle was audited by the infection-control team.

The clinical pharmacy department started to update the list of restricted antimicrobials and the checklist of compliance. Restricted broad-spectrum antibiotics including 3rd or 4th-generation cephalosporins, carbapenems and fluoroquinolones were only prescribed after approval by a designated infectious diseases physician. Additionally, the clinical department communicated with the microbiology laboratory to update the list of antibiotic combinations and a new pocket pamphlet was prepared to promote the antimicrobial stewardship program.

Data analyses were performed using GraphPad Prism (version 6). Qualitative variables were expressed as frequency and percentages. The incidence density was calculated as infections per 1000 patient days (stratified by infection type).

Being a carrier or infected with MDR Enterobacterales, particularly ESBL producers and CRE, requires prompt action by health care settings to control transmission and optimize patient management protocols. The establishment of a multidisciplinary approach, including screening, contact isolation, environmental cleaning and applying antimicrobial stewardship programs showed promising results in reducing the incidence of CRE and ESBL producers per 1000 patient days. Our findings revealed the effectiveness of multi-modal IPC approaches (controlling the source of infection, environmental cleaning and applying antimicrobial stewardship programs) in controlling and preventing infections elicited by CRE and ESBL producers, and hence they will be of great value for guiding clinicians in implementing effective treatment options against the respective clinically relevant pathogens.

The study was conducted according to the guidelines of the Declaration of Helsinki and approved by the Faculty of Pharmacy, Ain Shams University Research Ethics Committee (ENREC-ASU-2018-72). 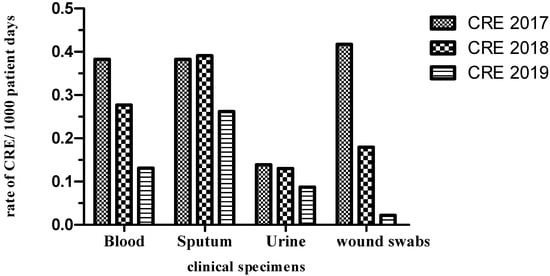 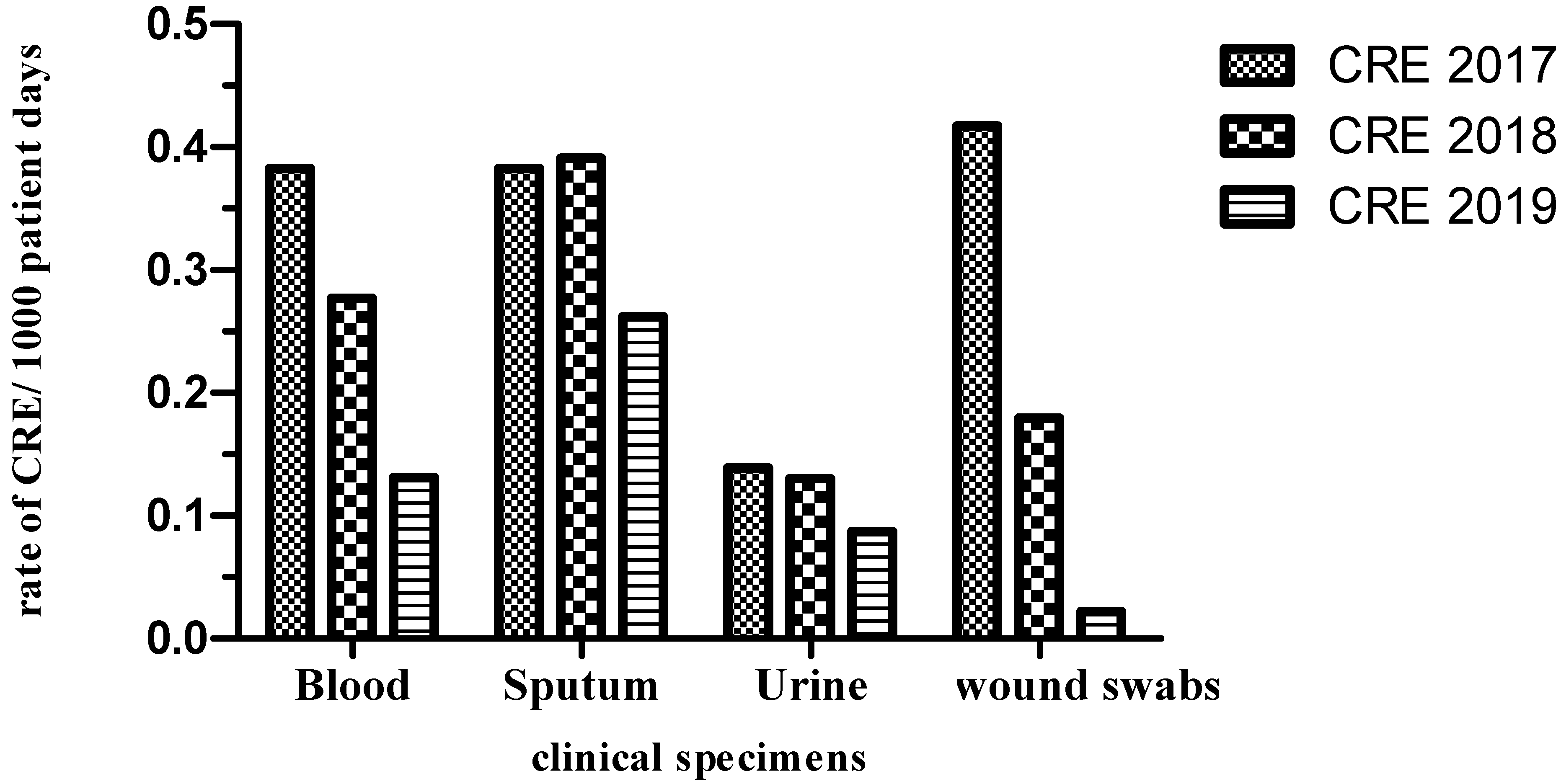 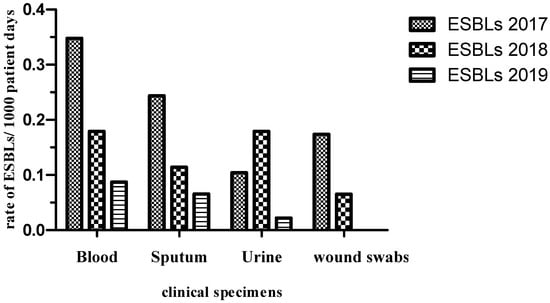 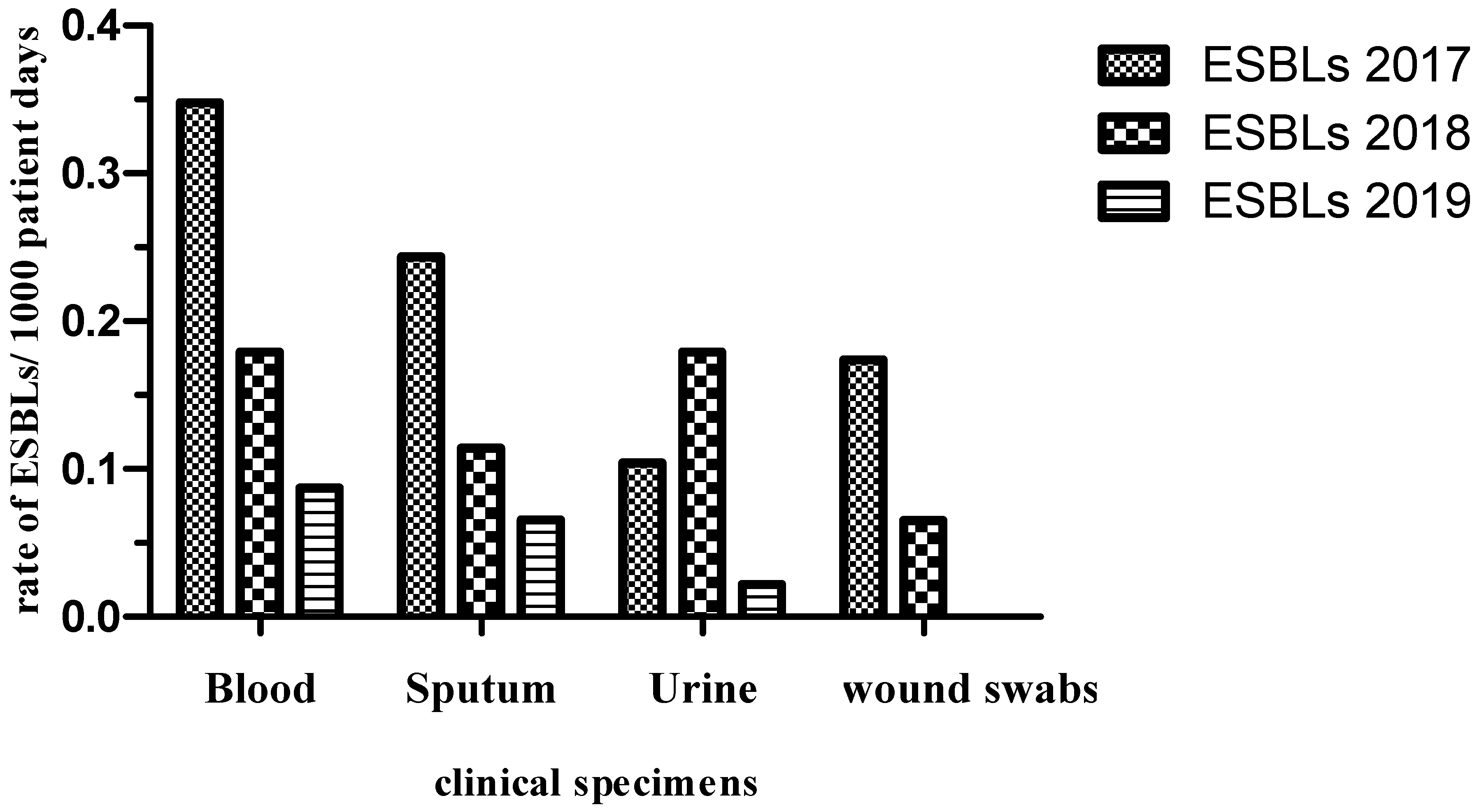 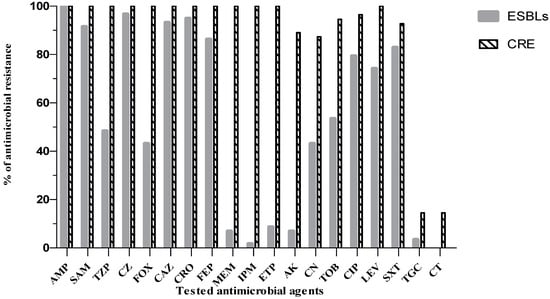 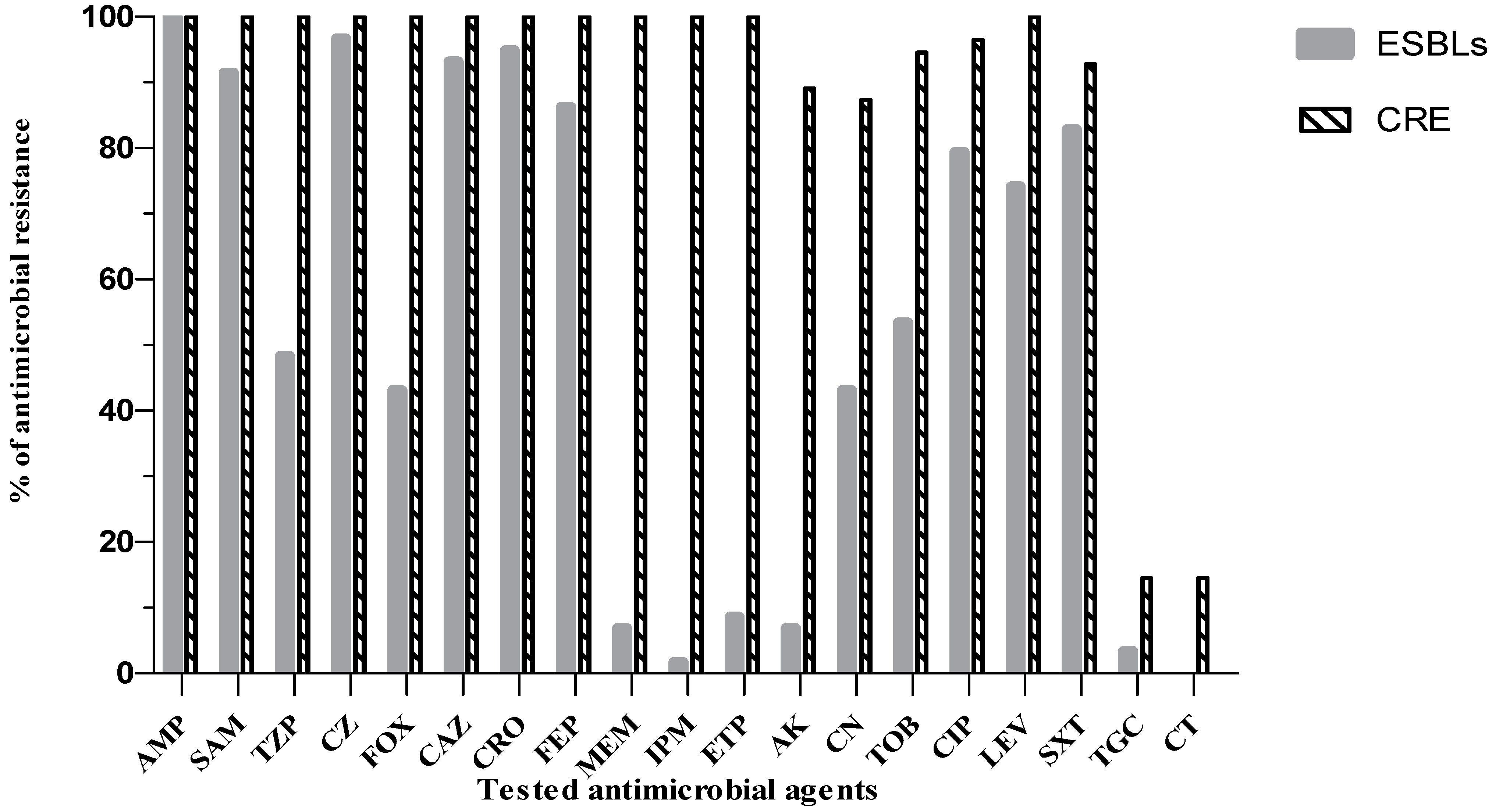