Honey as an Ecological Reservoir of Antibacterial Compounds Produced by Antagonistic Microbial Interactions in Plant Nectars, Honey and Honey Bee

Antibiotic resistance is one of the most important issues facing modern medicine. Some biocides have demonstrated the potential of selecting resistance to antibiotics in bacteria, but data are still very scarce and it is important to better identify the molecules concerned and the underlying mechanisms. This study aimed to assess the potential of polyhexamethylene biguanide (PHMB), a widely used biocide in a variety of sectors, to select antibiotic resistance in Escherichia coli grown in biofilms. Biofilms were grown on inox coupons and then exposed daily to sublethal concentrations of PHMB over 10 days. Antibiotic-resistant variants were then isolated and characterized phenotypically and genotypically to identify the mechanisms of resistance. Repeated exposure to PHMB led to the selection of an E. coli variant (Ec04m1) with stable resistance to gentamycin (8-fold increase in minimum inhibitory concentration (MIC) compared to the parental strain. This was also associated with a significant decrease in the growth rate in the variant. Sequencing and comparison of the parental strain and Ec04m1 whole genomes revealed a nonsense mutation in the aceE gene in the variant. This gene encodes the pyruvate dehydrogenase E1 component of the pyruvate dehydrogenase (PDH) complex, which catalyzes the conversion of pyruvate to acetyl-CoA and CO2. A growth experiment in the presence of acetate confirmed the role of this mutation in a decreased susceptibility to both PHMB and gentamicin (GEN) in the variant. This work highlights the potential of PHMB to select resistance to antibiotics in bacteria, and that enzymes of central metabolic pathways should be considered as a potential target in adaptation strategies, leading to cross-resistance toward biocides and antibiotics in bacteria. View Full-Text
Keywords: biocide; antibiotic resistance; cross-resistance; aminoglycoside; adaptation; biofilm; pyruvate cycle biocide; antibiotic resistance; cross-resistance; aminoglycoside; adaptation; biofilm; pyruvate cycle
►▼ Show Figures 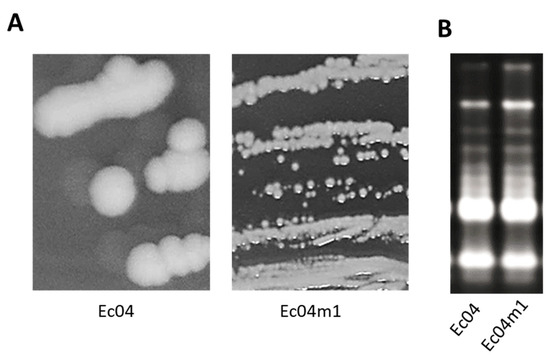