The Role of Antibiotic Resistant A. baumannii in the Pathogenesis of Urinary Tract Infection and the Potential of Its Treatment with the Use of Bacteriophage Therapy

Pseudomonas syringae pv. actinidiae (Psa) is a Gram-negative bacterium that causes bacterial canker disease in kiwifruit. Copper or antibiotics have been used in orchards to control this disease, but the recent emergence of antibiotic-resistant Psa has called for the development of a new control agent. We previously reported that the bacteriophage (or phage) PPPL-1 showed antibacterial activity for both biovar 2 and 3 of Psa. To investigate the possibility of PPPL-1 to control bacterial canker in kiwifruit, we further tested the efficacy of PPPL-1 and its phage cocktail with two other phages on suppressing disease development under greenhouse conditions using 6 weeks old kiwifruit plants. Our results showed that the disease control efficacy of PPPL-1 treatment was statistically similar to those of phage cocktail treatment or AgrimycinTM, which contains streptomycin and oxytetracycline antibiotics as active ingredients. Moreover, PPPL-1 could successfully kill streptomycin-resistant Psa isolates, of which the treatment of BuramycinTM carrying only streptomycin as an active ingredient had no effect in vitro. The phage PPPL-1 was further characterized, and stability assays showed that the phage was stable in the field soil and at low temperature of 0 ± 2 °C. In addition, the phage could be scaled up quickly up to 1010 pfu/mL at 12 h later from initial multiplicity of infection of 0.000005. Our results indicate that PPPL-1 phage is a useful candidate as a biocontrol agent and could be a tool to control the bacterial canker in kiwifruit by Psa infection in the field conditions. View Full-Text
Keywords: bacterial canker; disease control; kiwifruit; phage; Pseudomonas syringae pv. actinidiae bacterial canker; disease control; kiwifruit; phage; Pseudomonas syringae pv. actinidiae
►▼ Show Figures 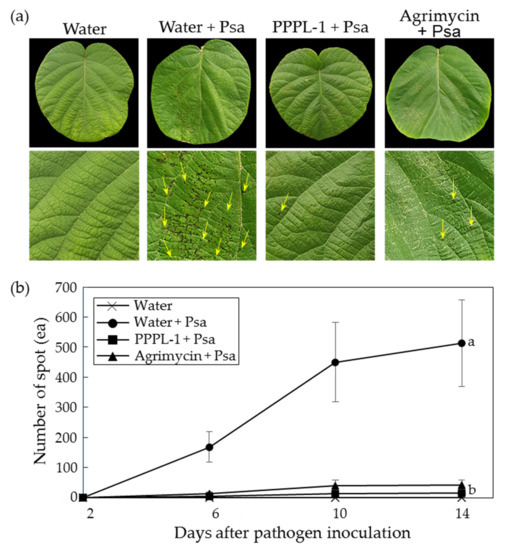