Carriage of Multidrug Resistance Staphylococci in Shelter Dogs in Timisoara, Romania
Next Article in Special Issue

Prevalence of and Risk Factors for Nonprescription Antibiotic Use among Individuals Presenting to One Hospital in Saudi Arabia after the 2018 Executive Regulations of Health Practice Law: A Cross-Sectional Study
Previous Article in Journal

Dispensing of Non-Prescribed Antibiotics from Community Pharmacies of Pakistan: A Cross-Sectional Survey of Pharmacy Staff’s Opinion

Domestic poultry farming considerably improves the socioeconomic status of families and communities in low- and middle-income countries [1]. In Ghana, most rural and semi-urban households own poultry [2]. In total, households own approximately 40 million poultry compared with an estimated 70 million kept on commercial farms [3]. Both commercial farms and free-range poultry production by households face challenges such as poor husbandry conditions, feeding status and diseases among farm animals [4]. To address some of these challenges, antimicrobials have been used for more than seven decades in poultry production as growth promoters and to prevent and treat infections [5,6,7].
Extensive use of antimicrobials in animals has contributed to an increase in antimicrobial resistance (AMR) [8]. Subsequently, the spread of multidrug-resistant bacteria has emerged as a global health threat [8,9]. AMR hampers the treatment of life-threatening infections in both humans and animals. Over the years, high numbers of antimicrobial-resistant bacteria have been isolated from patient samples of rural, urban and semi-urban health facilities in Ghana [10,11] as well as from locally produced and imported poultry [12]. In North Central Nigeria, it was observed that even though many commercial poultry farmers used antimicrobials, their level of knowledge regarding antimicrobial use (AMU) was low [13].
Few studies have been carried out in Ghana to describe antimicrobial usage in commercial poultry farms [14,15,16]. A previous study aimed at investigating essential antibiotics used in poultry production in Ghana found tetracyclines (24.17%), aminoglycosides (17.87%), penicillins (16.51%) and fluoroquinolones to be commonly administered [14]. Antibiotic residues have been found in the albumen and yolk of poultry eggs from farms that overly used antibiotics to cover up hygiene lapses [15]. About 41% of animal husbandry farmers in Ghana use antibiotics for infection prevention at least once a month [16]. Unlike commercial farms, no previous studies can be found regarding antimicrobial usage in domestic poultry in Ghana. However, this information is crucial for the development of interventions to reduce the spread of antimicrobial resistance. This study aims to investigate antimicrobial usage in both commercial and domestic poultry farming in two districts in the Ashanti region of Ghana.

2.1. Frequencies of Poultry Produced by Commercial and Domestic Farmers

2.2. Antimicrobial Use in Commercial and Domestic Poultry Farming

The study was conducted in Agogo and Ejisu, located within two districts in the Ashanti region of Ghana (Figure 2) [33]. Agogo, the capital of the Asante Akim North municipality, is a rural community with a projected population of 94,297 [34]. It is located in the eastern part of the Ashanti region, 82 km by road from Kumasi, the capital city of the Ashanti region. Most households of the Asante Akim North municipality (98%) are involved in crop farming [34]. Chicken is reared by 42% of the population and accounted for 56% of livestock kept in the district [34].
Ejisu is a semi-urban community located within the Ejisu Juaben municipality. It is the fifth-largest district in the Ashanti region, occupying a total land area of 582 square kilometers. The current projected population is 188,628 with 57% of households engaged in agriculture. About 21% of the 23,416 households in the municipality rear livestock, and poultry accounts for 70% of the livestock [34].

A cross-sectional survey was conducted among commercial poultry farms and households that kept domestic chickens in rural (Agogo) and semi-urban (Ejisu) communities in Ghana. Interviews were conducted between January and October 2020. We developed, piloted and validated a questionnaire with fourteen items, 2 open and 10 close-ended questions. The final questionnaire included: two questions on participants’ characteristics, two questions on the type and quantity of poultry kept, four questions on antimicrobial administration, and six questions on veterinary services offered to the farm. Two of the close-ended questions were “yes/no” questions; the remaining were multiple-response questions.
The questionnaire was administered to 13 farms and 70 households in the Agogo community. In Ejisu, it was administered to 20 farms and 60 households; the same questions were asked in both the farms and households. All farms and households were selected using snowball sampling. From each community, one or two poultry farms and potential households rearing free-range poultry were initially identified, and we requested that they introduce us to another poultry farm or household for possible sampling. At the commercial farm level, we interviewed the farm managers, and at the household level, we interviewed the poultry owners. A trained study team member carried out the interviews and inspected the packaging of currently used antimicrobial medications to obtain data on the active agents.

The median along with the interquartile range (IQR) was used to summarize the poultry population. Absolute frequencies and their corresponding percentages were used to describe categorical variables. Crude prevalence ratios (PR) and their corresponding 95% confidence intervals (CI) were calculated to show associations between two categorical variables. Poisson regression, with robust standard errors, was calculated considering all variables of interest to control for potential confounding. There were no missing data; due to the explanatory nature of the study, no significance testing was applied. All statistical analyses were performed using R (version 4.0.3, R Core Team, Vienna, Austria) software [35]; the epiR (version 2.0.19, R Core Team, Vienna, Austria) package was used to calculate PRs, and the sandwich package (version 3.0-0, R Core Team, Vienna, Austria) was used to compute robust estimators of the Poisson regression.

This work was funded by the German Research Foundation (DFG; project number 380545990).

The data used to support the findings of this study are available from the corresponding author upon request.

The authors gratefully acknowledge the support of Abdul Seidu Razak and Cynthia Adu Kyerewaa, Kumasi Centre for Collaborative Research in Tropical Medicine (KCCR), for helping in the collection of data from the various locations. We are also indebted to all commercial and domestic poultry keepers who participated in this study for their time and cooperation. 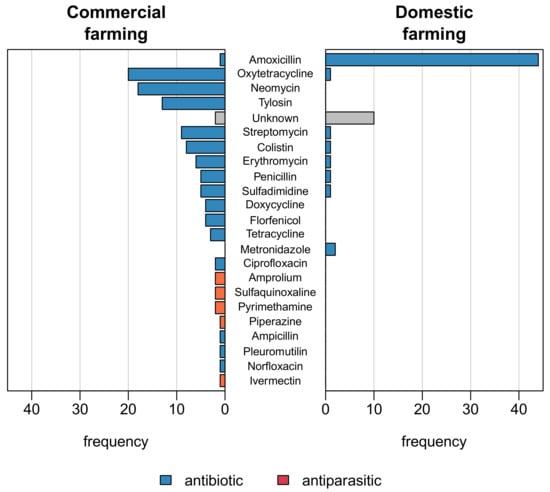 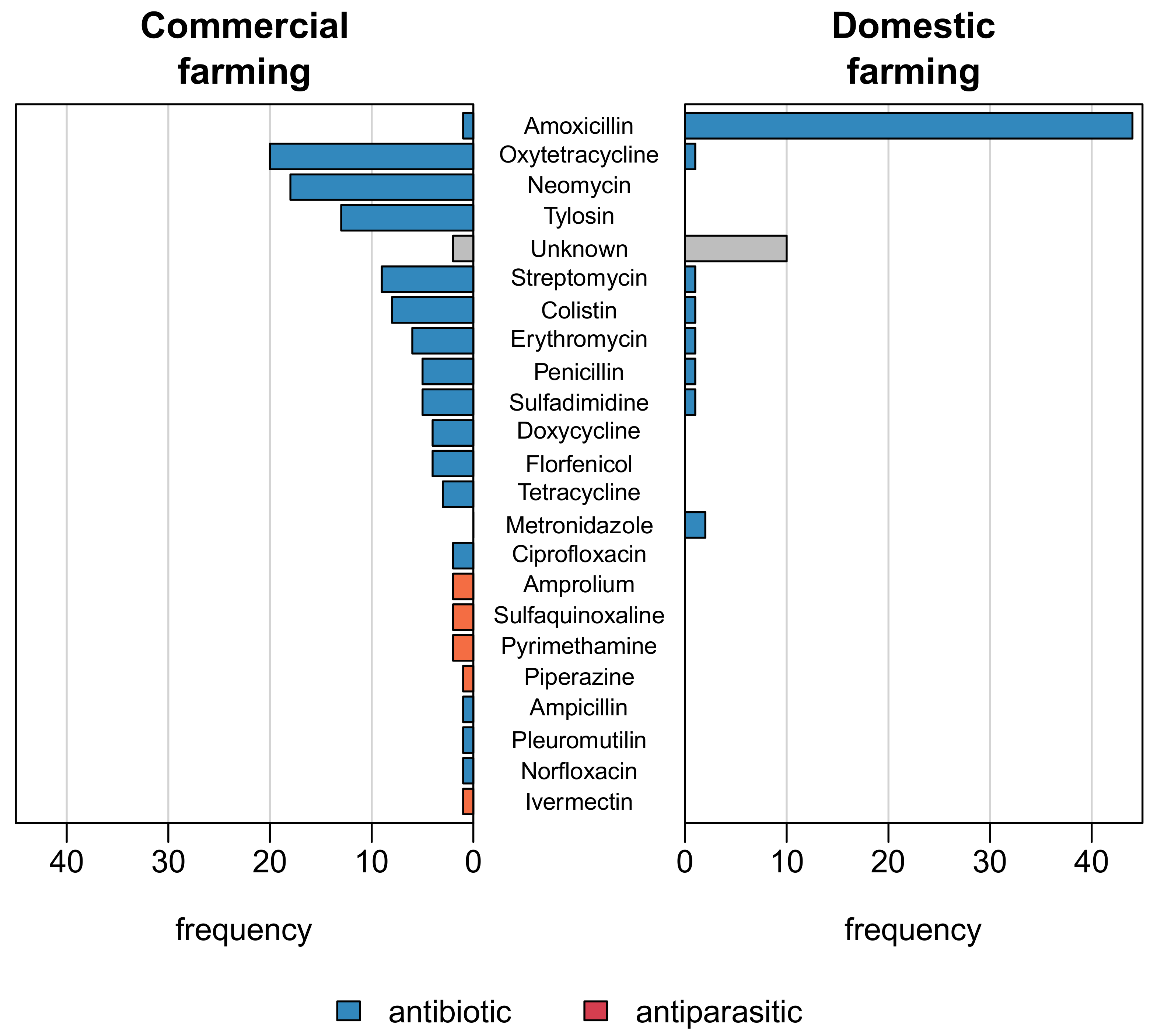 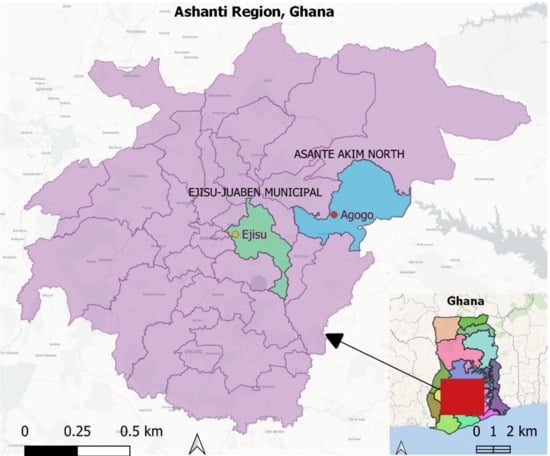 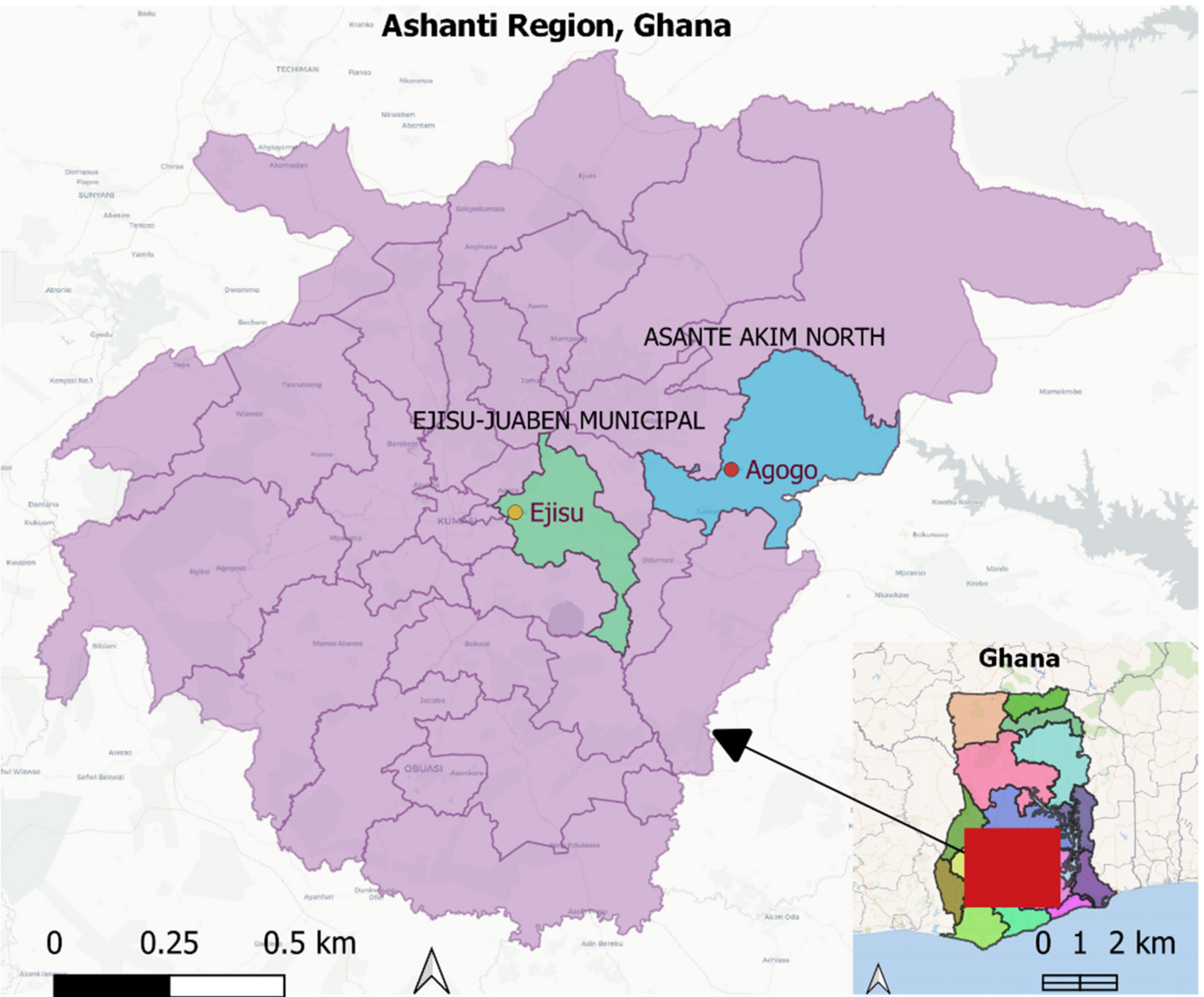