Position-Dependent Influence of the Three Trp Residues on the Membrane Activity of the Antimicrobial Peptide, Tritrpticin
Next Article in Special Issue

Glycopeptides are considered antibiotics of last resort for the treatment of life-threatening infections caused by relevant Gram-positive human pathogens, such as Staphylococcus aureus, Enterococcus spp. and Clostridium difficile. The emergence of glycopeptide-resistant clinical isolates, first among enterococci and then in staphylococci, has prompted research for second generation glycopeptides and a flurry of activity aimed at understanding resistance mechanisms and their evolution. Glycopeptides are glycosylated non-ribosomal peptides produced by a diverse group of soil actinomycetes. They target Gram-positive bacteria by binding to the acyl-D-alanyl-D-alanine (D-Ala-D-Ala) terminus of the growing peptidoglycan on the outer surface of the cytoplasmatic membrane. Glycopeptide-resistant organisms avoid such a fate by replacing the D-Ala-D-Ala terminus with D-alanyl-D-lactate (D-Ala-D-Lac) or D-alanyl-D-serine (D-Ala-D-Ser), thus markedly reducing antibiotic affinity for the cellular target. Resistance has manifested itself in enterococci and staphylococci largely through the expression of genes (named van) encoding proteins that reprogram cell wall biosynthesis and, thus, evade the action of the antibiotic. These resistance mechanisms were most likely co-opted from the glycopeptide producing actinomycetes, which use them to avoid suicide during antibiotic production, rather than being orchestrated by pathogen bacteria upon continued treatment. van-like gene clusters, similar to those described in enterococci, were in fact identified in many glycopeptide-producing actinomycetes, such as Actinoplanes teichomyceticus, which produces teicoplanin, and Streptomyces toyocaensis, which produces the A47934 glycopeptide. In this paper, we describe the natural and semi-synthetic glycopeptide antibiotics currently used as last resort drugs for Gram-positive infections and compare the van gene-based strategies of glycopeptide resistance among the pathogens and the producing actinomycetes. Particular attention is given to the strategy of immunity recently described in Nonomuraea sp. ATCC 39727. Nonomuraea sp. ATCC 39727 is the producer of A40926, which is the natural precursor of the second generation semi-synthetic glycopeptide dalbavancin, very recently approved for acute bacterial skin and skin structure infections. A thorough understanding of glycopeptide immunity in this producing microorganism may be particularly relevant to predict and eventually control the evolution of resistance that might arise following introduction of dalbavancin and other second generation glycopeptides into clinics. View Full-Text
Keywords: glycopeptides; resistance; van genes; Nonomuraea sp. ATCC 39727; dalbavancin glycopeptides; resistance; van genes; Nonomuraea sp. ATCC 39727; dalbavancin
►▼ Show Figures 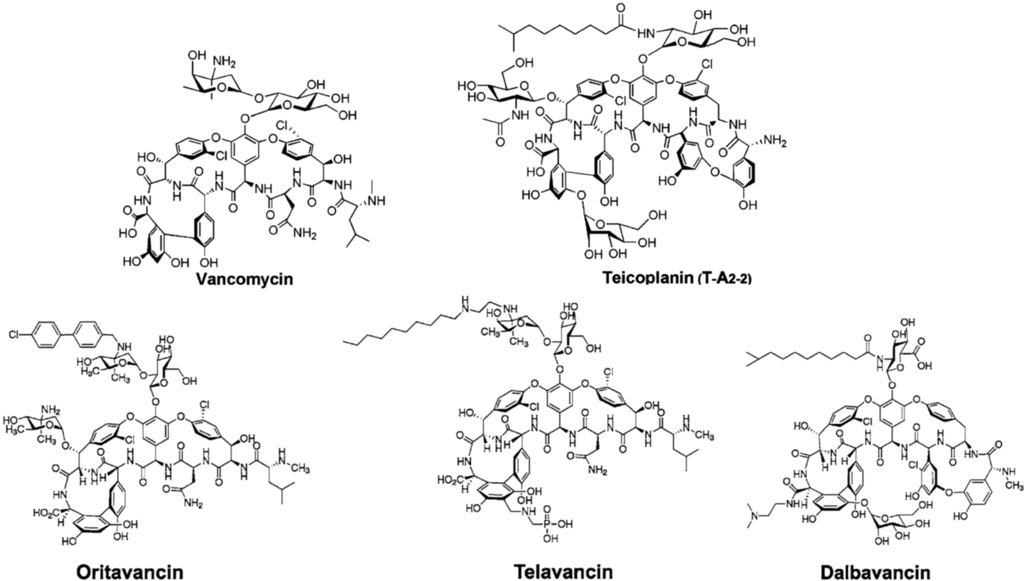