Focus on the Outer Membrane Factor OprM, the Forgotten Player from Efflux Pumps Assemblies
Next Article in Special Issue

Co-Selection of Resistance to Antibiotics, Biocides and Heavy Metals, and Its Relevance to Foodborne Pathogens
Previous Article in Journal

Livestock-Associated MRSA: The Impact on Humans

During the past 25 years an increase in the prevalence of methicillin-resistant Staphylococcus aureus (HA-MRSA) was recorded worldwide. Additionally, MRSA infections may occur outside and independent of hospitals, caused by community associated MRSA (CA-MRSA). In Germany, we found that at least 10% of these sporadic infections are due to livestock-associated MRSA (LA-MRSA), which is initially associated with livestock. The majority of these MRSA cases are attributed to clonal complex CC398. LA-MRSA CC398 colonizes the animals asymptomatically in about half of conventional pig farms. For about 77%–86% of humans with occupational exposure to pigs, nasal carriage has been reported; it can be lost when exposure is interrupted. Among family members living at the same farms, only 4%–5% are colonized. Spread beyond this group of people is less frequent. The prevalence of LA-MRSA in livestock seems to be influenced by farm size, farming systems, usage of disinfectants, and in-feed zinc. LA-MRSA CC398 is able to cause the same kind of infections in humans as S. aureus and MRSA in general. It can be introduced to hospitals and cause nosocomial infections such as postoperative surgical site infections, ventilator associated pneumonia, septicemia, and infections after joint replacement. For this reason, screening for MRSA colonization at hospital admittance is recommended for farmers and veterinarians with livestock contacts. Intrahospital dissemination, typical for HA-MRSA in the absence of sufficient hygiene, has only rarely been observed for LA-MRSA to date. The proportion of LA-MRSA among all MRSA from nosocomial infections is about 3% across Germany. In geographical areas with a comparatively high density of conventional farms, LA-MRSA accounts for up to 10% of MRSA from septicemia and 15% of MRSA from wound infections. As known from comparative genome analysis, LA-MRSA has evolved from human-adapted methicillin-susceptible S. aureus, and the jump to livestock was obviously associated with several genetic changes. Reversion of the genetic changes and readaptation to humans bears a potential health risk and requires tight surveillance. Although most LA-MRSA (>80%) is resistant to several antibiotics, there are still sufficient treatment options. View Full-Text
Keywords: methicillin-resistant Staphylococcus aureus; livestock; zoonotic transmission methicillin-resistant Staphylococcus aureus; livestock; zoonotic transmission
►▼ Show Figures 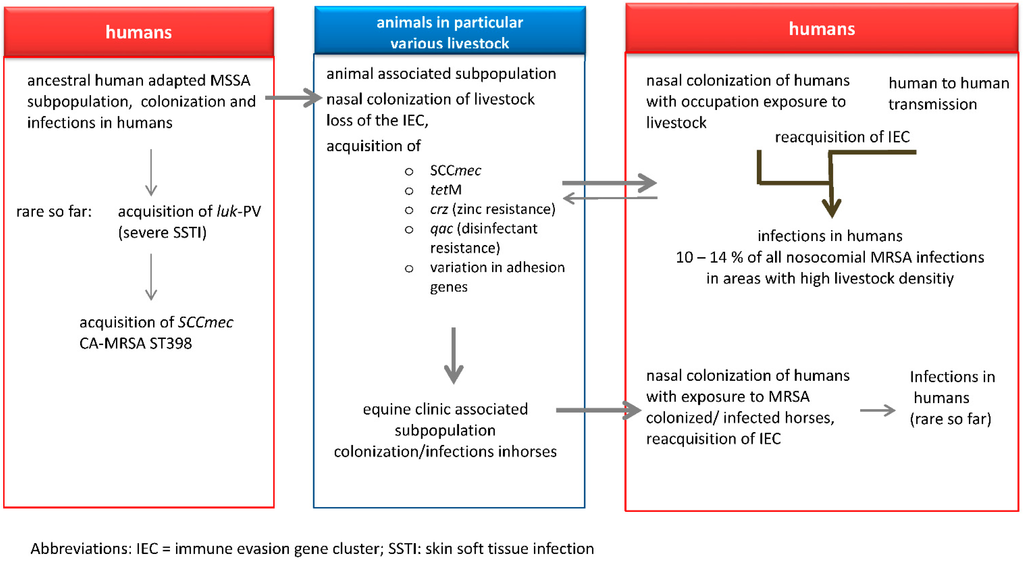