The study was conducted in accordance with the Declaration of Helsinki, and the protocol was approved by the Ethics Committee of Baylor College of Medicine on 20 June 2017 (H-39705).

The study included two private family medicine clinics in a large urban area. Approximately 19,777 patients attend 3248 appointments at these clinics each month. Patients in both clinics are predominantly female (58%) and white (54%). De-identified records were extracted from the Epic Clarity database (electronic health record system). We selected all patients 18 years and older during the period of January 2011–August 2016 who had any of the two International Classification of Diseases, Ninth Revision (ICD-9) codes for acute bronchitis listed as a diagnosis: 466.0 (acute bronchitis and bronchiolitis) and 490.0 (bronchitis, not specified as acute or chronic). Figure 1 shows the selection process used to determine visits with uncomplicated acute bronchitis.
Patient visits were excluded from analysis if they had any of the following additional diagnosis codes for which antibiotics might be indicated: chronic bronchitis, emphysema or COPD, pneumonia, urinary tract infections, sinusitis, pharyngitis, skin, cutaneous and mucosal infections, acne, gastrointestinal infections, otitis media and miscellaneous bacterial infections, as well as visits with chest X-ray orders or abnormal vital signs (temperature >100.4 F, respiratory rate >24 breaths/min, or pulse >100 beats/min) that could be consistent with pneumonia. Presence of immunocompromising conditions (e.g., HIV, active malignancies, and chronic renal failure) was an additional exclusion criterion. Lastly, follow-up visits for bronchitis within 3 weeks of initial visit were excluded in order to prevent duplicating visits of a single episode.
For each eligible visit, we extracted the following variables: patient age, sex, race, date of visit, type of antibiotic prescribed, and duration of treatment. The type of antibiotic was classified as either “narrow-spectrum” or “broad-spectrum”. Amoxicillin, cephalexin, trimethoprim-sulfamethoxazole, lincomycin derivatives (clindamycin) were categorized as “narrow-spectrum”. Amoxicillin-clavulanate, macrolides (azithromycin, clarithromycin, and erythromycin), 2nd to 4th generation cephalosporins, and fluoroquinolones were categorized as “broad-spectrum”.

Descriptive statistics were performed on the general characteristics of acute bronchitis visits, the type of antibiotics prescribed, and duration of treatment in each visit. We studied the trends in the prescribing of antibiotics over the years (2011–2016) using the Mantel–Haenszel χ2 test for trend. We used the χ2 test to compare antibiotic prescribing between different patient age groups. Logistic regression analyses were used to determine independent predictors of antibiotic prescribing for acute bronchitis. Factors were regarded as being significant in the regression analyses when they had a p value of <0.05. Analyses were carried out using SPSS (version 24; SPSS, Chicago, IL, USA).

This research received no specific grant from any funding agency. It was supported in part by the Houston VA HSR&D Center for Innovations in Quality, Effectiveness and Safety (CIN 13-413). 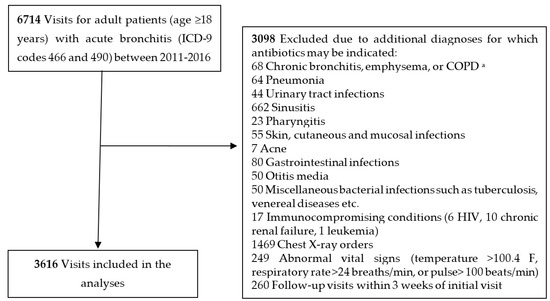 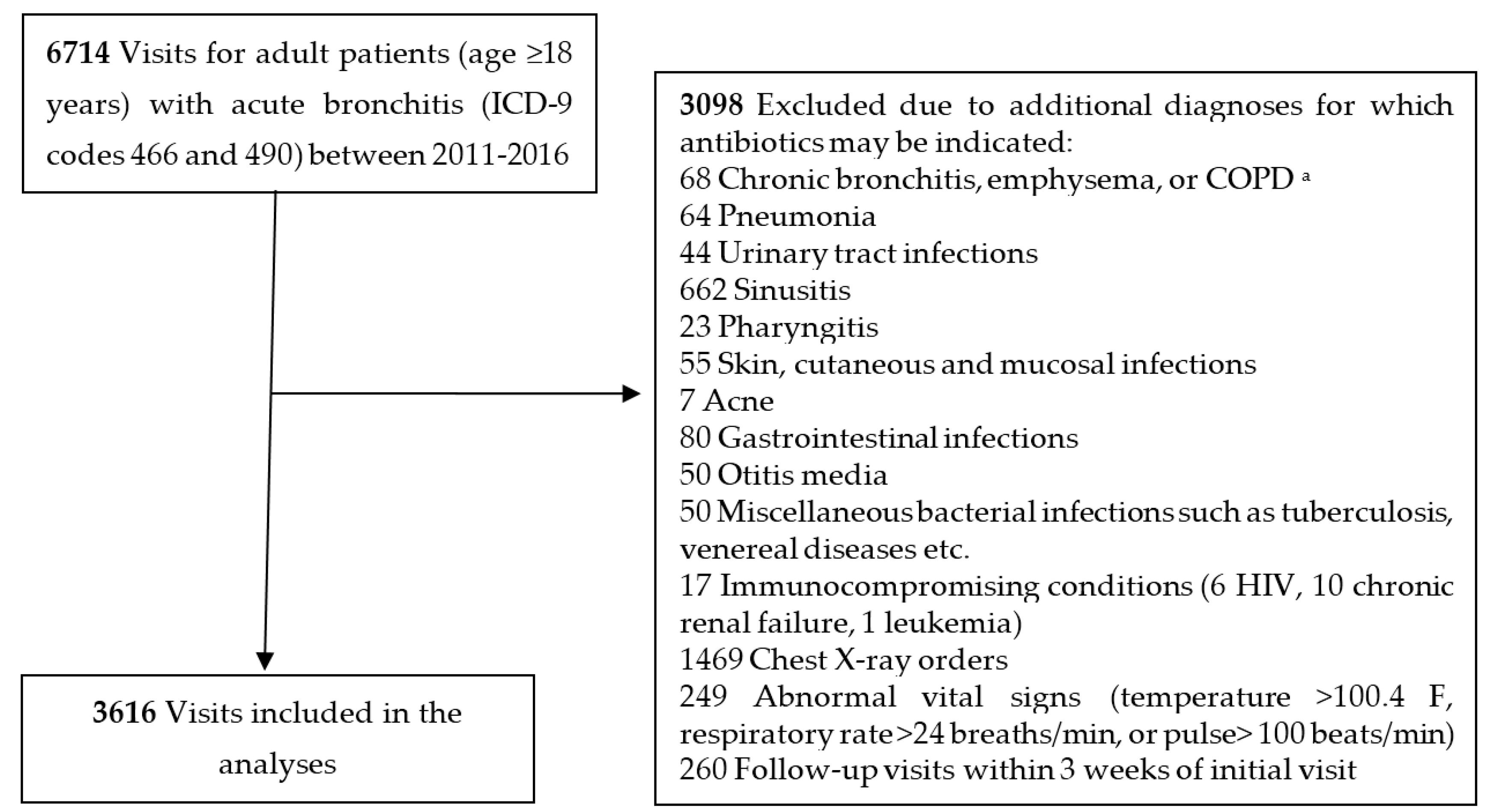