Antibiotic residue in meat is a serious public health concern due to its harmful effects on consumer health. This study aimed at estimating the residue levels of four commonly used antibiotics in meat samples using three analytical methods (ELISA, TLC and HPLC). A total of 150 samples of raw meat from sales points were analysed for ciprofloxacin, streptomycin, tetracycline, and sulphanilamide residues. Overall, ELISA analysis showed that 56, 34, 18, and 25.3% of the samples tested positive for ciprofloxacin, streptomycin, sulphanilamide and tetracycline residues respectively while TLC and HPLC detected 21.4, 29.4, 92.5, and 14.6%, and 8.3, 41.1, 88.8, and 14.6% of the samples as containing the residues, with ciprofloxacin and sulphanilamide having the lowest and highest occurrence, respectively. Furthermore, the concentrations of antibiotic residues were in the ranges of 19.8–92.8, 26.6–489.1, 14.2–1280.8, and 42.6–355.6 μg/kg with ELISA, while HPLC detected concentration ranges of 20.7–82.1, 41.8–320.8, 65.2–952.2 and 32.8–95.6 μg/kg for sulphanilamide, tetracycline, streptomycin, and ciprofloxacin, respectively. Mean ciprofloxacin and streptomycin residue levels were above the Codex/SA MRL recommended limit, while 3% of the samples contained multidrug residues. Although some of the mean residues levels were below the permissible limits, the co-occurrence of multidrug residues in some of the samples calls for concern. View Full-Text
Keywords: antibiotic residue; ELISA; TLC; HPLC; beef; chicken; pork antibiotic residue; ELISA; TLC; HPLC; beef; chicken; pork
►▼ Show Figures 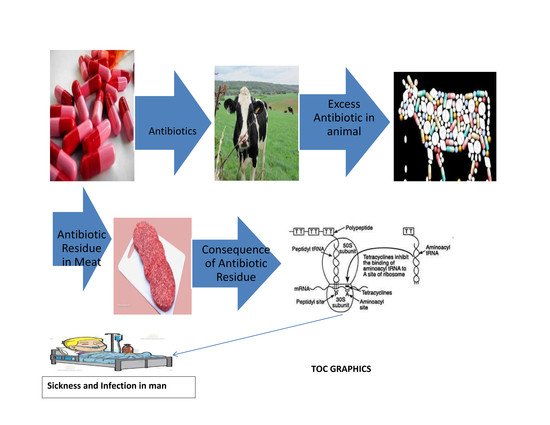