Antimicrobial Usage in Animal Production: A Review of the Literature with a Focus on Low- and Middle-Income Countries

Antimicrobial use (AMU) in animal production is a key contributor to antimicrobial resistance (AMR) worldwide. As consumption of animal protein and associated animal production is forecast to increase markedly over coming years in low- and middle-income countries (LMICs), accurate monitoring of AMU has become imperative. We summarized data from 89 scientific studies reporting AMU data in animal production published in English since 1998, identified through the ‘ISI Web of Knowledge’ search engine. The aims were as follows: (a) to describe methodologies and metrics used to quantify AMU; (b) to summarize qualitative (on-farm prevalence of use) and quantitative (amounts of antimicrobial active principle) data, in order to identify food animal species at the highest risk of AMU; and (c) to highlight data gaps from LMICs. Only 17/89 (19.1%) studies were conducted in LMICs. Sixty (67.3%) reported quantitative data use, with ‘daily doses per animal-time’ being the most common metric. AMU was greatest in chickens (138 doses/1000 animal-days [inter quartile range (IQR) 91.1–438.3]), followed by swine (40.2 [IQR 8.5–120.4]), and dairy cattle (10.0 [IQR 5.5–13.6]). However, per kg of meat produced, AMU was highest in swine, followed by chickens and cattle. Our review highlights a large deficit of data from LMICs, and provides a reference for comparison with further surveillance and research initiatives aiming to reduce AMU in animal production globally. View Full-Text
Keywords: antimicrobial use; livestock; poultry; metrics; pigs; cattle; chickens antimicrobial use; livestock; poultry; metrics; pigs; cattle; chickens
►▼ Show Figures 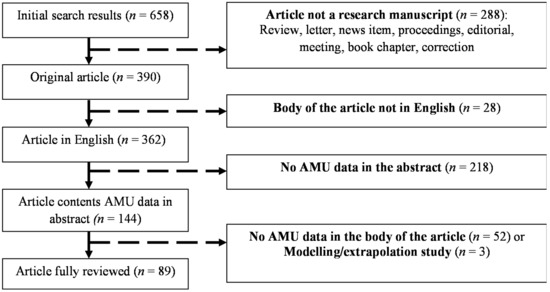