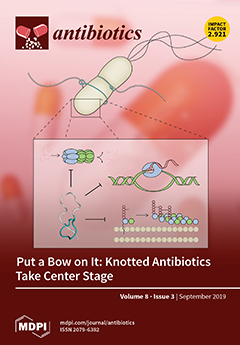 Cover Story (view full-size image): The discovery of new antibiotics has drastically decreased in the last 30 years. Finding new classes of antimicrobials is a top priority in the fight against multidrug-resistant pathogens. Herein, we discuss a unique class of antimicrobials, the lasso peptides. We review lasso peptide biosynthesis, their antibiotic activity, and unique mechanisms of action. As interest in antimicrobial lasso peptides continues to grow, and further discovery and bio-engineering will facilitate their therapeutic and industrial commercialization. View this paper
Previous Issue
Volume 8, June
Next Issue
Volume 8, December
We use cookies on our website to ensure you get the best experience. Read more about our cookies here.
Accept
We have just recently launched a new version of our website. Help us to further improve by taking part in this short 5 minute survey here. here.
Never show this again