Characterization of LysBC17, a Lytic Endopeptidase from Bacillus cereus
Previous Article in Journal

Tedizolid Versus Linezolid for the Treatment of Acute Bacterial Skin and Skin Structure Infection: A Systematic Review and Meta-Analysis

This meta-analysis aims to assess the efficacy and safety of tedizolid, compared to linezolid, in the treatment of acute bacterial skin and skin structure infection (ABSSSI). PubMed, Web of Science, EBSCO (Elton B. Stephens Co.), Cochrane Library, Ovid Medline and Embase databases were accessed until 18 July 2019. Only randomized controlled trials (RCTs) comparing the efficacy of tedizolid with linezolid for adult patients with ABSSSIs were included. The outcomes included the clinical response, microbiological response, and risk of adverse events (AEs). A total of four RCTs involving 2056 adult patients with ABSSSI were enrolled. The early clinical response rate was 79.6% and 80.5% for patients receiving tedizolid and linezolid, respectively. The pooled analysis showed that tedizolid had a non-inferior early clinical response rate to linezolid (odds ratio (OR) = 0.96, 95% confidence interval (CI) = 0.77–1.19, I2 = 0%). The early response rate was similar between tedizolid and linezolid among patients with cellulitis/erysipelas (75.1% vs. 77.1%; OR = 0.90, 95% CI = 0.64–1.27, I2 = 25%), major cutaneous abscess (85.1% vs. 86.8%; OR = 0.93, 95% CI = 0.42–2.03, I2 = 37%) and wound infection (85.9% vs. 82.6%; OR = 1.29, 95% CI = 0.66–2.51, I2 = 45%). For methicillin-resistant Staphylococcus aureus patients, tedizolid had a favorable microbiological response rate of 95.2% which was comparable to linezolid (94%) (OR = 1.19, 95% CI = 0.49–2.90, I2 = 0%). In addition to the similar risk of treatment-emergent AEs (a serious event, the discontinuation of the study drug due to AEs and mortality between tedizolid and linezolid), tedizolid was associated with a lower risk of nausea, vomiting and abnormal neutrophil count than linezolid. In conclusion, once-daily tedizolid (200 mg for six days) compared to linezolid (600 mg twice-daily for 10 days) was non-inferior in efficacy in the treatment of ABSSSI. Besides, tedizolid was generally as well tolerated as linezolid, and had a lower incidence of gastrointestinal AEs and bone marrow suppression than linezolid. View Full-Text
Keywords: tedizolid; linezolid; acute bacterial skin and skin structure infection tedizolid; linezolid; acute bacterial skin and skin structure infection
►▼ Show Figures 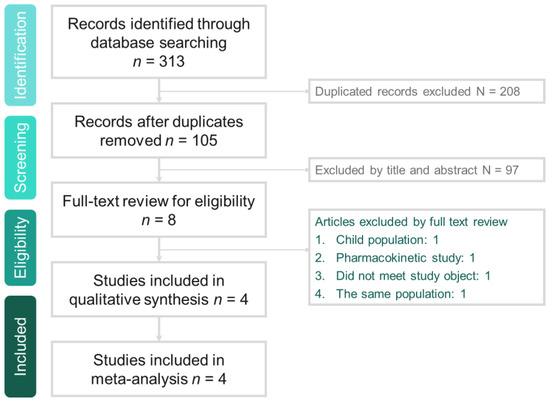