Structural Analysis of The OXA-48 Carbapenemase Bound to A “Poor” Carbapenem Substrate, Doripenem

Carbapenem-resistant Enterobacteriaceae have been a global public health issue in recent years. Here, a carbapenem-resistant Kluyvera cryocrescens strain SCW13 was isolated from hospital sewage, and was then subjected to whole-genome sequencing (WGS). Based on WGS data, antimicrobial resistance genes were identified. Resistance plasmids were completely circularized and further bioinformatics analyses of plasmids were performed. A conjugation assay was performed to identify a self-transmissible plasmid mediating carbapenem resistance. A phylogenetic tree was constructed based on the core genome of publicly available Kluyvera strains. The isolate SCW13 exhibited resistance to cephalosporin and carbapenem. blaNDM-1 was found to be located on a ~53-kb self-transmissible IncX3 plasmid, which exhibited high similarity to the previously reported pNDM-HN380, which is an epidemic blaNDM-1-carrying IncX3 plasmid. Further, we found that SCW13 contained a chromosomal blaKLUC-2 gene, which was the probable origin of the plasmid-born blaKLUC-2 found in Enterobacter cloacae. Phylogenetic analysis showed that K. cryocrescens SCW13 exhibited a close relationship with K. cryocrescens NCTC10483. These findings highlight the further dissemination of blaNDM through clonal IncX3 plasmids related to pNDM-HN380 among uncommon Enterobacteriaceae strains, including Kluyvera in this case. View Full-Text
Keywords: Kluyvera; NDM-1; IncX3; blaKLUC-2; carbapenemase Kluyvera; NDM-1; IncX3; blaKLUC-2; carbapenemase
►▼ Show Figures 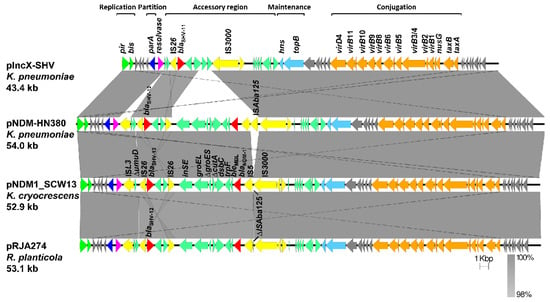