The Case for a More Holistic Approach to Dry Eye Disease: Is It Time to Move beyond Antibiotics?
Next Article in Special Issue

Dissolution of the Disparate: Co-ordinate Regulation in Antibiotic Biosynthesis

Geldanamycin and the closely related herbimycins A, B, and C are benzoquinone-type ansamycins with antitumoral activity. They are produced by Streptomyces hygroscopicus var. geldanus, Streptomyces lydicus and Streptomyces autolyticus among other Streptomyces strains. Geldanamycins interact with the Hsp-90 chaperone, a protein that has a key role in tumorigenesis of human cells. Geldanamycin is a polyketide antibiotic and the polyketide synthase contain seven modules organized in three geldanamycin synthases genes named gdmAI, gdmAII, and gdmAIII. The loading domain of GdmI activates AHBA, and also related hydroxybenzoic acid derivatives, forming geldanamycin analogues. Three regulatory genes, gdmRI, gdmRII, and gdmRIII were found associated with the geldanamycin gene cluster in S. hygroscopicus strains. GdmRI and GdmRII are LAL-type (large ATP binding regulators of the LuxR family) transcriptional regulators, while GdmRIII belongs to the TetR-family. All three are positive regulators of geldanamycin biosynthesis and are strictly required for expression of the geldanamycin polyketide synthases. In S. autolyticus the gdmRIII regulates geldanamycin biosynthesis and also expression of genes in the elaiophylin gene cluster, an unrelated macrodiolide antibiotic. The biosynthesis of geldanamycin is very sensitive to the inorganic phosphate concentration in the medium. This regulation is exerted through the two components system PhoR-PhoP. The phoRP genes of S. hygroscopicus are linked to phoU encoding a transcriptional modulator. The phoP gene was deleted in S. hygroscopicus var geldanus and the mutant was unable to grow in SPG medium unless supplemented with 5 mM phosphate. Also, the S. hygroscopicus pstS gene involved in the high affinity phosphate transport was cloned, and PhoP binding sequences (PHO boxes), were found upstream of phoU, phoRP, and pstS; the phoRP-phoU sequences were confirmed by EMSA and nuclease footprinting protection assays. The PhoP binding sequence consists of 11 nucleotide direct repeat units that are similar to those found in S. coelicolor Streptomyces avermitilis and other Streptomyces species. The available genetic information provides interesting tools for modification of the biosynthetic and regulatory mechanisms in order to increase geldanamycin production and to obtain new geldanamycin analogues with better antitumor properties. View Full-Text
Keywords: geldanamycins; Streptomyces hygroscopicus; antitumorals; biosynthesis; gene cluster; phosphate control geldanamycins; Streptomyces hygroscopicus; antitumorals; biosynthesis; gene cluster; phosphate control
►▼ Show Figures 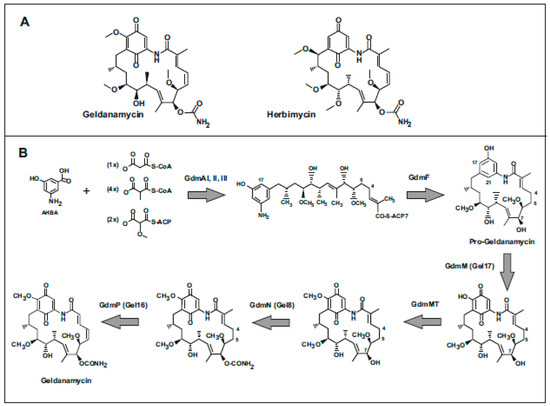