Background: The diffusion of antimicrobial resistance is a significant concern for public health worldwide. Staphylococcus aureus represents a paradigm microorganism for antibiotic resistance in that resistant strains appear within a decade after the introduction of new antibiotics. Methods: Fourteen S. aureus isolates from human specimens and twenty-one from samples of animal origin, were compared for their antimicrobial resistance and biofilm capability. In addition, they were characterized at the molecular level to detect the antimicrobial resistance mecA gene and genes related with enterotoxin, toxin, and biofilm production. Results: Both phenotypic and molecular analysis showed main differences among human- and animal-derived isolates. Among the human-derived isolates, more multidrug-resistant isolates were detected and mecA gene, enterotoxin, and toxin genes were more prevalent. Different genes involved in biofilm production were detected with bap present only in animal-derived isolates and sasC present in both isolates, however, with a higher prevalence in the human-derived isolates. Biofilm capability was higher in human-derived isolates mainly associated to the sasC gene. Conclusions: The overall results indicate that human S. aureus isolates are more virulent and resistant than the isolates of animal origin randomly selected with no infection anamnesis. This study confirms that selection for more virulent and resistant S. aureus strains is related to the clinical practice.
Keywords: Staphylococcus aureus; Staphylococcal toxins; mecA; antibiotic resistance; biofilm activity; MRSA Staphylococcus aureus; Staphylococcal toxins; mecA; antibiotic resistance; biofilm activity; MRSA

Staphylococcus aureus is often found as a component of the human microbiota associated with skin, skin glands, and mucous membranes, particularly in the nose of healthy individuals [1,2]. In some cases, S. aureus causes a wide range of soft human infections [3], such as mild skin and soft tissue infections, as well as life-threatening pneumonia, bacteremia, osteomyelitis, endocarditis, sepsis, and toxic shock syndrome [4], and it is implicated in both community-acquired and nosocomial infections [2]. In addition to the infections listed above, S. aureus is often responsible for scalded skin syndrome and staphylococcal foodborne diseases [5,6].
In addition to causing infections in humans, S. aureus can also be the origin of infections in ruminants such as cattle, goats, and sheep, leading to clinical and subclinical mastitis. The pathogen spreads from the udder of the infected animal into raw milk, affecting the quality and quantity of milk and milk-derived products. Therefore, this pathogen represents a major economic problem for farmers and a serious problem for the dairy industry [7].
S. aureus pathogenicity depends upon its capability to produce and secrete different toxins and virulence factors that contribute to colonization and invasion of the host and bacterial spread [8]. The family of superantigen exotoxins is comprised of well-known secreted virulence factors, such as the staphylococcal enterotoxins (se), the toxic shock syndrome toxin 1 (tsst-1), and the exfoliative toxins (eta and etb). The latter are associated with staphylococcal scalded-skin syndrome [5]. Until now, more than 20 staphylococcal enterotoxins that can cause food poisoning or enterotoxin-like proteins have been identified [9].
In addition to the production of virulence factors, S. aureus genome shows enormous plasticity with the consequent acquisition of transmissible genetic elements, coding for resistance proteins. One example is the mecA gene that is present within the staphylococcal cassette chromosome mec (SCCmec) [2]. The mecA gene encodes an alternative penicillin binding protein, PBP2a [1], that makes the bacterial strain resistant both to methicillin (MRSA) and all other β-lactam antibiotics [2]. The ability to acquire horizontally resistant genes and the antibiotic pressure induces the emergence of multidrug-resistant (resistant to three or more classes of antibiotics) S. aureus strains, which are considered a significant concern for public health.
Furthermore, it is well known that S. aureus produces biofilm, a thick extracellular exopolysaccharide layer which protects bacteria. Biofilm can be easily formed inside biomaterials as indwelling medical devices, often causing chronic diseases that are difficult to eradicate. Biofilm formation is a multifactorial event, controlled by quorum sensing and several proteins, such as the accessory gene regulator (Agr), the biofilm-associated protein (Bap), the intercellular adhesion protein (Ica), and the S. aureus surface protein (SasC).
More recently, antimicrobial resistance has been found even in previously unexplored environments, where antibiotic pressure is missing, and it has been demonstrated that food can serve as a vehicle for transmission of S. aureus to the human population [10,11]. Indeed, the comparison between human isolates and animal-derived isolates was performed also in other studies [12] suggesting that food, after handling and processing, could represent a source of human infection, and for food operators a source of food contamination.
The aim of this work was to compare the antibiotic resistance profile and biofilm production of S. aureus isolates derived from fourteen medical specimens and twenty-one animal-derived samples collected in Sicily. In addition to the phenotypic characterization, the isolates were compared for the presence of toxin genes and biofilm-related genes.

All human-derived isolates (1–14) produced biofilm, as much or more than the positive control, represented by the S. aureus strain ATCC 25923, a strong biofilm producer (Figure 2A). In particular, isolates 3, 5, 12, and 13 produced the most biofilm. On the other hand, all the isolates derived from animal samples (15–35) were weak or moderate biofilm formers (Figure 2B). Isolate 28 produced as much biofilm as the positive control. The S. aureus human-derived isolates produced more biofilm than the animal-derived isolates, and there is a significant difference between the two groups (p < 0.0001).

2.4. Detection of Virulence and Biofilm Related Genes of S. aureus

Thirty-five S. aureus strains were isolated between December 2017 and February 2019 from different matrices, following standard laboratory protocols.
Fourteen S. aureus human-derived isolates and twenty-one isolated from animal-derived food were chosen for this analysis. (Table 5). Isolation was carried out by microbiological and biochemical methods [6]. Frozen cell glycerol stocks of S. aureus isolates were prepared as described in [27] and kept at −80 °C until use.

Total DNA from S. aureus isolates was extracted by boiling the samples in 200 μl of TE buffer (10 mM Tris HCl, 1 mM EDTA, pH 8). The lysates obtained were numbered with an internal identification number. Three multiplex PCR assays were carried out to detect virulence genes in S. aureus [6,29]. PCR to detect ica, bap, and sasC genes were carried out following thermal profile and oligonucleotides reported in other studies [24,29,30]. Detection of femA was used as an internal positive control. Nucleotide sequences and PCR product sizes for the S. aureus gene-specific oligonucleotide primers used in this study are reported in Table 6.

The test for biofilm production was performed as described previously with some minor modifications [31,32]. In particular, after overnight growth of single colonies in 150 µL TSB at 37 °C in agitation for 24 h, the 96 microplates were washed twice with tap water. Then, 150 µL of a 0.1% of crystal violet in 0.9% w/v sodium chloride solution was added to each well and the plate was incubated for approximately 15 min at room temperature. After staining, the microplates were washed again two to three times to remove any trace of dye and then left to dry at room temperature for a few hours. Then, 150 µL of 33% acetic acid was used to solubilize biofilm forming cells and a microplate reader (GloMax® multidetection system) was used to read the optical density at a wavelength of 600 nm. The average and standard deviation from a triplicate of each sample were determined. As a positive control, S. aureus ATCC 25923 was used. The SAS software (version 9.4) was used to calculate the p value. A p value ≤ 0.05 was considered as statistically significant.

Our study demonstrated that S. aureus isolates from human specimens displays more resistance to antibiotics and produce more biofilm than the isolates collected from animal-derived samples. However, this study confirmed the importance of controlling antibiotic use in medical and veterinary practice and of monitoring the animal-derived isolates, since they are developing a greater resistance to the most commonly used antibiotics.

This research was funded by the Italian Ministry of Health to M.V. (IZS SI 13/15 RC and IZS SI 08/16 RC) and by the University of Palermo, Fondo Finalizzato alla Ricerca to R.A. 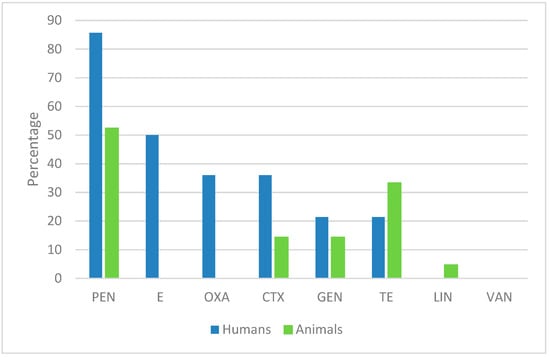 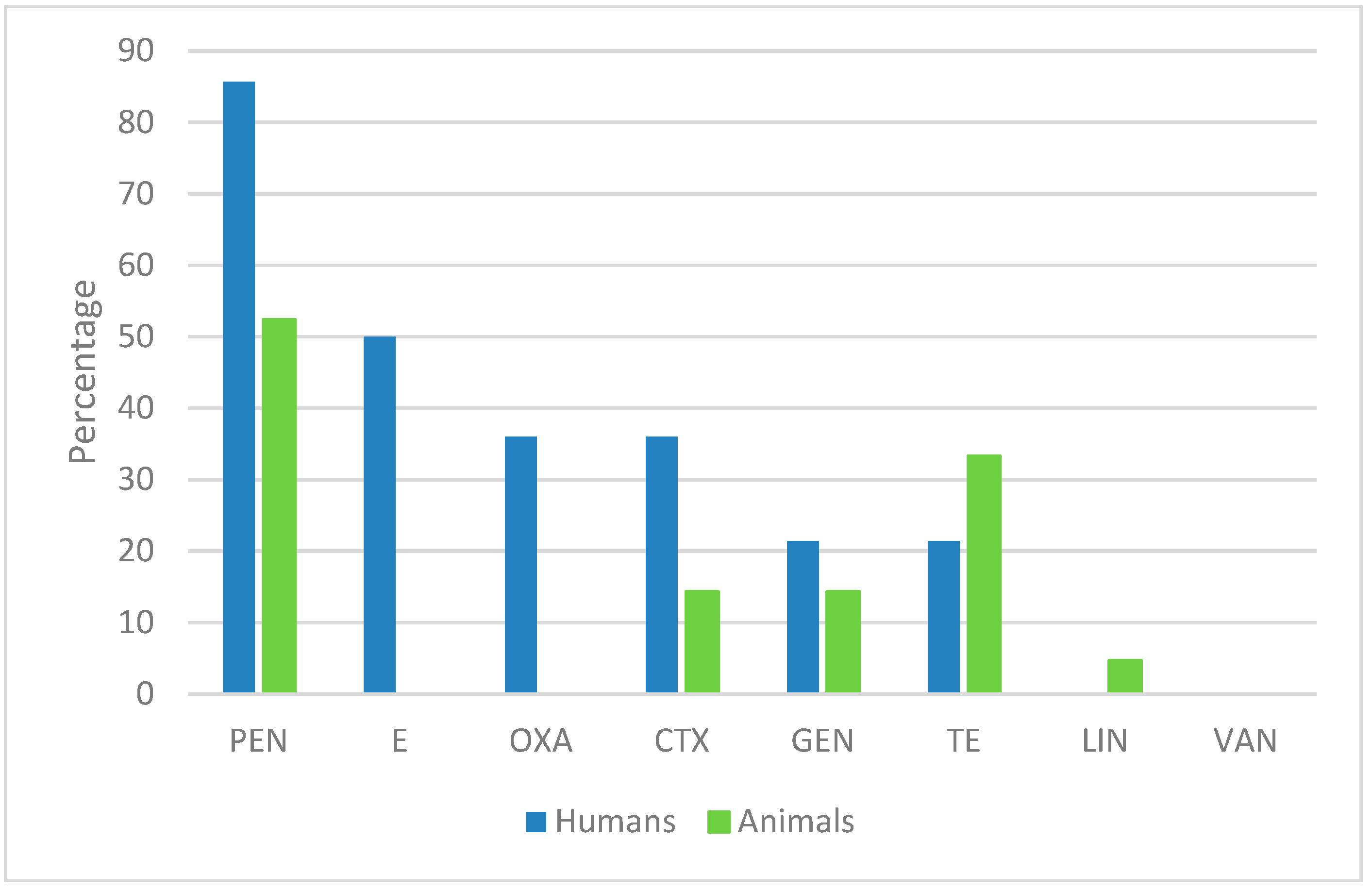 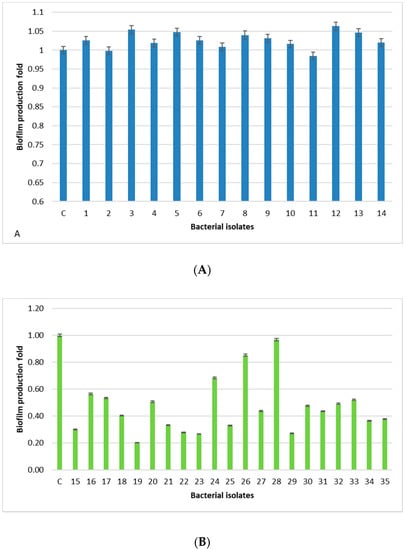 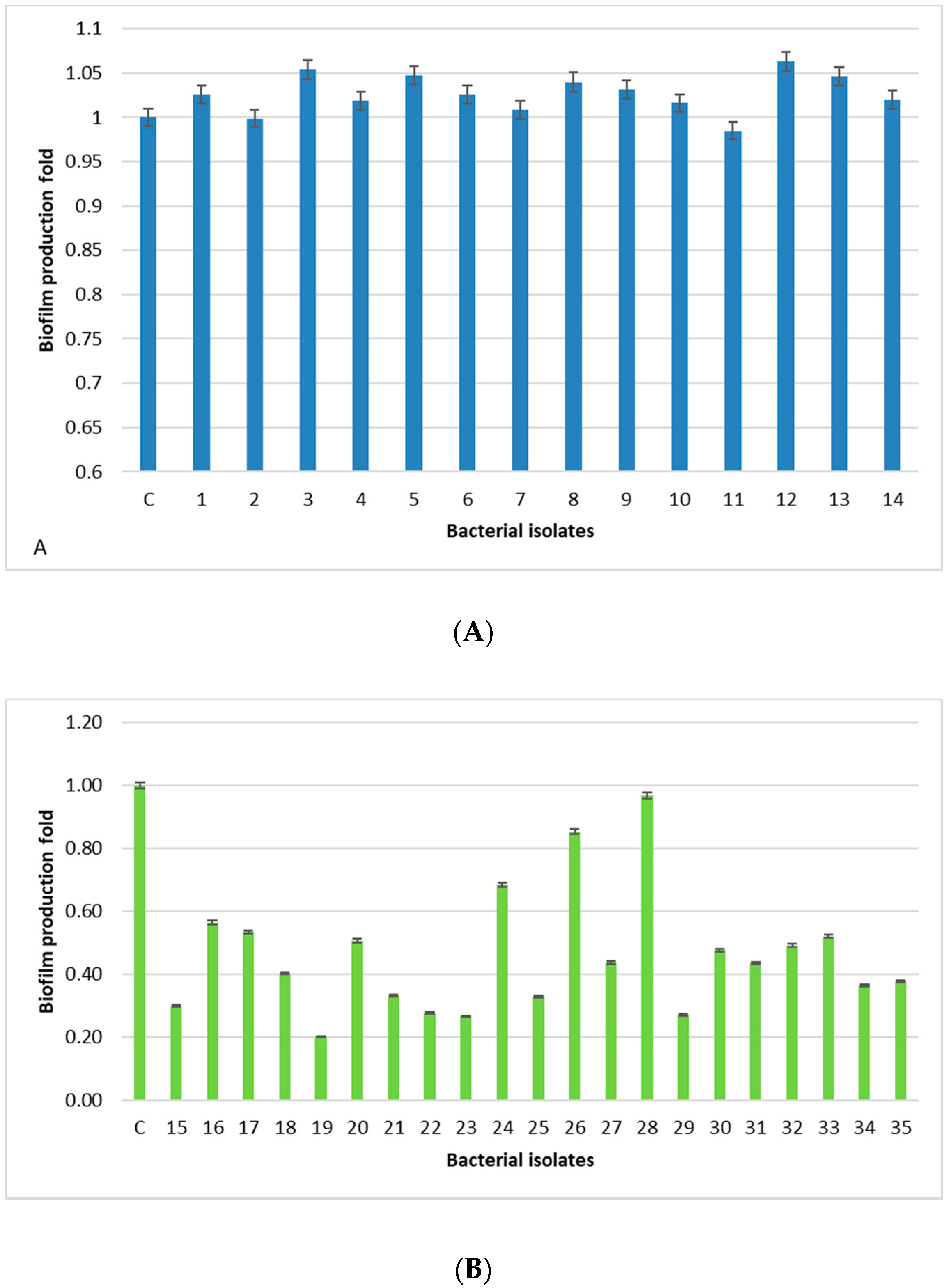