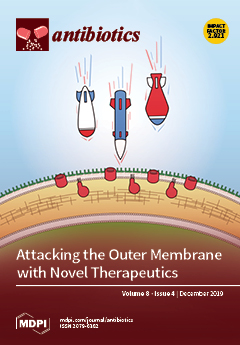 Cover Story (view full-size image): The spread of resistance and the outer membrane of Gram-negative bacteria, which functions as a barrier, both preclude the clinical use of many antibiotics for treating infections. Recent work has greatly strengthened our understanding of the molecular machines required for outer-membrane assembly. Now, considerable advances have been made in the discovery efforts for novel compounds targeting outer-membrane assembly. Clever strategies, both genetic and biochemical, have identified many promising compounds acting on the outer membrane. Potent new chemicals targeting evolutionarily conserved pathways are now being developed further for future clinical use. Hope for a novel class of outer-membrane-acting antibiotics is now the highest it has been in over forty years. View this paper
Previous Issue
Volume 8, September
Next Issue
Volume 9, January
We use cookies on our website to ensure you get the best experience. Read more about our cookies here.
Accept
We have just recently launched a new version of our website. Help us to further improve by taking part in this short 5 minute survey here. here.
Never show this again