Development and Challenges of Antimicrobial Peptides for Therapeutic Applications

More than 3000 antimicrobial peptides (AMPs) have been discovered, seven of which have been approved by the U.S. Food and Drug Administration (FDA). Now commercialized, these seven peptides have mostly been utilized for topical medications, though some have been injected into the body to treat severe bacterial infections. To understand the translational potential for AMPs, we analyzed FDA-approved drugs in the FDA drug database. We examined their physicochemical properties, secondary structures, and mechanisms of action, and compared them with the peptides in the AMP database. All FDA-approved AMPs were discovered in Gram-positive soil bacteria, and 98% of known AMPs also come from natural sources (skin secretions of frogs and toxins from different species). However, AMPs can have undesirable properties as drugs, including instability and toxicity. Thus, the design and construction of effective AMPs require an understanding of the mechanisms of known peptides and their effects on the human body. This review provides an overview to guide the development of AMPs that can potentially be used as antimicrobial drugs. View Full-Text
Keywords: antimicrobial peptides; antibiotics; antibiotic resistance; rational protein design; peptide therapeutics; FDA-approved peptides antimicrobial peptides; antibiotics; antibiotic resistance; rational protein design; peptide therapeutics; FDA-approved peptides
►▼ Show Figures 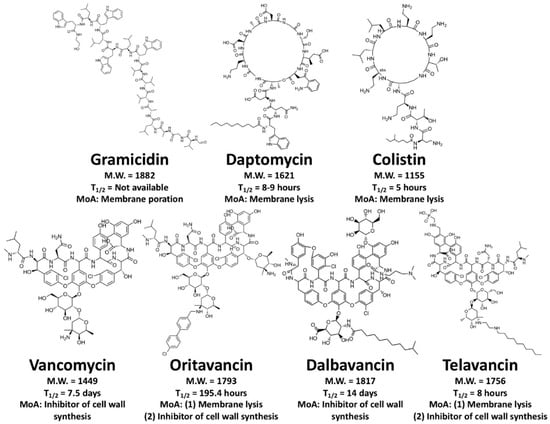