Antibiotics in Food Chain: The Consequences for Antibiotic Resistance

The surveillance of antimicrobial resistance among humans and food-producing animals is important to monitor the zoonotic transmission of multidrug-resistant bacteria (MDRB). We assessed the prevalence of four MDRB within the meat production chain, including extended-spectrum β-lactamase (ESBL)-producing, carbapenemase-producing Enterobacterales (CPE) and colistin-resistant Enterobacterales (Col-E), as well as vancomycin-resistant enterococci (VRE). In total, 505 samples from four stages of meat production, i.e., slaughterhouses, meat-processing plants, fresh food products and the urban environment, were collected in northwestern Germany in 2018/2019 and screened for the presence of MDRB using both culture-based and PCR-based techniques. We detected genes encoding for carbapenemases in 9–56% (blaOXA-48, blaKPC, blaNDM, blaVIM) and colistin resistance-encoding mcr genes in 9–26% of the samples from all stages. Culture-based analysis found CPE and VRE only in environmental samples (11% and 7%, respectively), but Col-E and ESBL-producers in 1–7% and 12–46% of samples from all stages, respectively. Overall, our results showed that ESBL-producers and mcr-carrying Col-E were common in food-producing animals at slaughterhouses, in meat-processing plants and in food items at retail, while CPE and VRE were only found in the environment. The discrepancy between detected carbapenemase genes and isolated CPE emphasizes the need for more sensitive detection methods for CPE monitoring. View Full-Text
Keywords: antimicrobial resistance; food safety; one health; zoonosis antimicrobial resistance; food safety; one health; zoonosis
►▼ Show Figures 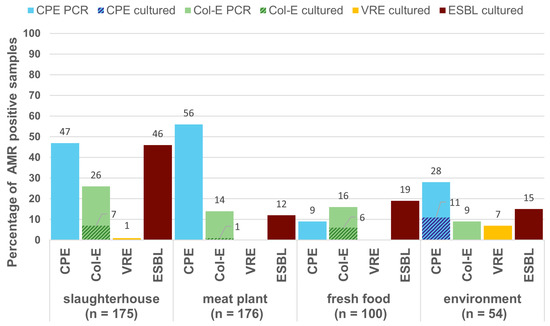