Conceptualising the Integration of Strategies by Clinical Commissioning Groups in England towards the Antibiotic Prescribing Targets for the Quality Premium Financial Incentive Scheme: A Short Report
Next Article in Special Issue

The Bactericidal Activity of Protein Extracts from Loranthus europaeus Berries: A Natural Resource of Bioactive Compounds
Previous Article in Journal

Fungal contaminations with Candida species are commonly responsible for several infections, especially when associated to bacteria. The therapeutic approach commonly used is being compromised due to microbial resistances of these microorganisms to antimicrobial agents, especially in biofilm. The use of honey as an antimicrobial agent has been emerging as a valuable solution and proving its potential in planktonic and in biofilm cells. This work aims to assess the effect of different honeys on biofilms of Candida tropicalis and Pseudomonas aeruginosa. The effect of Portuguese heather (PH) and manuka honeys on planktonic growth of Candida was initially evaluated by determination of the minimum inhibitory concentrations (MIC). Then, the same effect was evaluated in mixed biofilms, by colony-forming units numeration and fluorescence microscopy. The combinations of honey plus fluconazole and gentamicin were also tested. The results showed that the honeys tested enabled a great reduction of C. tropicalis, both in planktonic (12.5% and 25% of MIC for PH and manuka) and in biofilm. In polymicrobial biofilms, the use of PH and manuka honeys was revealed to be a promising choice and an alternative treatment, since they were able to reduce cells from both species. No synergistic effect was observed in antimicrobial combinations assays against polymicrobial biofilms. View Full-Text
Keywords: Candida tropicalis; Pseudomonas aeruginosa; biofilms; honey therapy; antifungal agents Candida tropicalis; Pseudomonas aeruginosa; biofilms; honey therapy; antifungal agents
►▼ Show Figures 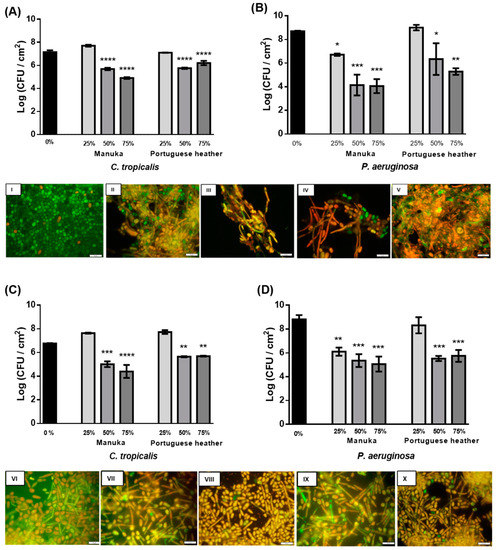