The Effectiveness of Chlorhexidine and Air Polishing System in the Treatment of Candida albicans Infected Dental Implants: An Experimental In Vitro Study
Previous Article in Journal

Pan-Drug Resistant Acinetobacter baumannii, but Not Other Strains, Are Resistant to the Bee Venom Peptide Melittin

Acinetobacter baumannii is a prevalent pathogen in hospital settings with increasing importance in infections associated with biofilm production. Due to a rapid increase in its drug resistance and the failure of commonly available antibiotics to treat A. baumannii infections, this bacterium has become a critical public health issue. For these multi-drug resistant A. baumannii, polymyxin antibiotics are considered the only option for the treatment of severe infections. Concerning, several polymyxin-resistant A. baumannii strains have been isolated over the last few years. This study utilized pan drug-resistant (PDR) strains of A. baumannii isolated in Brazil, along with susceptible (S) and extreme drug-resistant (XDR) strains in order to evaluate the in vitro activity of melittin, an antimicrobial peptide, in comparison to polymyxin and another antibiotic, imipenem. From a broth microdilution method, the determined minimum inhibitory concentration showed that S and XDR strains were susceptible to melittin. In contrast, PDR A. baumannii was resistant to all treatments. Treatment with the peptide was also observed to inhibit biofilm formation of a susceptible strain and appeared to cause permanent membrane damage. A subpopulation of PDR showed membrane damage, however, it was not sufficient to stop bacterial growth, suggesting that alterations involved with antibiotic resistance could also influence melittin resistance. Presumably, mutations in the PDR that have arisen to confer resistance to widely used therapeutics also confer resistance to melittin. Our results demonstrate the potential of melittin to be used in the control of bacterial infections and suggest that antimicrobial peptides can serve as the basis for the development of new treatments. View Full-Text
Keywords: Acinetobacter baumannii; multidrug resistance; pan drug resistance; melittin; biofilm; antimicrobial peptide Acinetobacter baumannii; multidrug resistance; pan drug resistance; melittin; biofilm; antimicrobial peptide
►▼ Show Figures 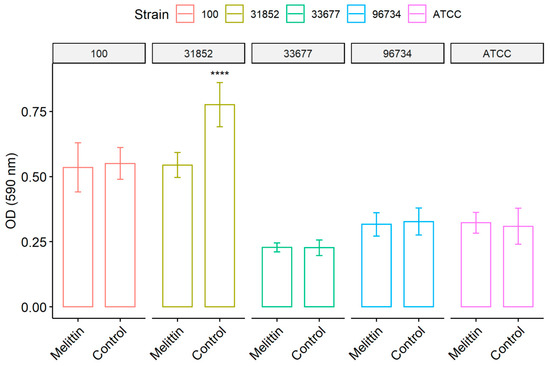