The Current Burden of Carbapenemases: Review of Significant Properties and Dissemination among Gram-Negative Bacteria
Previous Article in Journal

Antibiotic resistance (ABR) is regarded as an important threat to the clinical effectiveness of antibiotics and is a major public health problem of global concern [1,2,3]. ABR has drastically amplified due to the irrational prescribing and/or inappropriate use of antibiotics [4,5]. There is a higher number of infections and outbreaks due to Methicillin-resistant Staphylococcus aureus (MRSA) and Vancomycin-resistant enterococci (VRE) since 2010 [6]. Parallel to the ABR problem, there have been less fruitful research and development in discovering the new antibiotics. Moreover, several million people die due to resistant infections worldwide annually [1]. The cost to manage these resistance infections has also significantly enhanced [7].
The unjudicial use of antibiotics is common in both hospital and community settings [8]. According to the World Health Organization (WHO), more than 60% of the total antibiotics are used in the community, and nearly half of them are misused [9]. There is also a direct relationship between the use of antibiotics and the emergence of ABR [10].
Just like other developing countries [4], China is also facing the problem of ABR [11]. China has been placed in the second spot in terms of the overall antibiotic consumption across all countries [12]. Recently, a study highlighted the prescribing of antibiotics in 80% of Chinese patients suffering from upper respiratory tract infections who visited the outpatient department (OPD) [13]. Additionally, a significant increase in resistance has also been noted against Acinetobacter baumannii and carbapenem-resistant Klebsiella pneumonia since 2005, as reported by the national resistance surveillance system of China [14]. Furthermore, the presence of colistin-resistant genes in community patients has further worsened the situation of ABR [15].
The sale of antibiotics without a prescription is not permitted in China as per the regulations of the China Food and Drug Administration in 2004 [16]. However, despite these regulations, the use of antibiotics without a prescription is a common practice across the country. A local study conducted in three different provinces of China showed high rates of dispensing antibiotics without a prescription from more than 50% of community pharmacies [17].
Several factors that could augment the irrational antibiotic prescribing among prescribers include patient demands, improper diagnosis, insufficient knowledge, and financial benefits [18].
Public education is one of the key interventions proposed by the WHO to rationalize the use of medicines [19]. Moreover, the improvement in public awareness and understanding of issues related to antibiotics is the principal strategic objective of the WHO Global Action Plan on Antimicrobial Resistance [20]. A variation in public knowledge in different countries about antibiotics has been highlighted by many studies [21]. The level of resistance was found to be higher in countries where there is a lack of awareness about ABR, such as in Sweden and the Netherlands, the knowledge of population is higher, and the ABR is lower [22]. It is believed that the perception of people towards medicines may affect their understanding of antibiotics and ABR [22,23,24]. Therefore, this study was aimed at determining the knowledge, attitude, and practices of customers about antibiotics and ABR visiting community pharmacies.

This was a multicentered, survey-based study conducted in three capital cities of China, including Xi’an (western part), Nanjing (eastern part), and Changsha (central part) between April 2019 to August 2019. These cities were selected because they have a difference in socioeconomic and GDP level, such as the Xi’an has the lowest GDP per capita, whereas Nanjing has the highest GDP [25,26,27].

A thorough literature review was undertaken to conceptualize the questionnaire [28,29,30,31,32]. The initial version of the questionnaire was subjected to content and face validity by a team of experts (2 professors of pharmacy practice background and three customers). Some changes were made as per the feedback and opinions of the experts as few questions were redundant and difficult to understand, so they were modified or removed. Field tests on a small population comprised of 10 customers were also conducted (data were excluded).
The final version of the questionnaire had 28-items with four sections (see Supplementary File). The first section was comprised of 8 questions pointed towards demographic information, such as gender, age, education, monthly income, employment status, and purpose of the visit of the participants. In the second section, seven questions were asked to determine the antibiotic-related knowledge of the participants with options ‘yes,’ ‘no,’ and ‘unclear.’ The third section had eight questions related to attitude about antibiotics rated on the Likert scale, such as ‘strongly agree,’ ‘agree,’ ‘neutral,’ ‘disagree,’ and ‘strongly disagree.’ The last section had five questions focused on practices about antibiotics with five options ‘always,’ ‘often,’ ‘sometimes,’ ‘seldom,’ and ‘never.’ The overall scoring of knowledge, attitude, and practices were divided into three categories. A participant was found to have poor, average, or good knowledge if his score is <3, 3–5, or 6–7, respectively. Similarly, a participant was assigned to have a poor, average, or good attitude if his score is <14, 14–27, or 28–40. Additionally, a participant with a score, <9, 9–16, or 17–25, was found to have poor, average, or good practices.
The reliability of the questionnaire was determined by pre-testing the questionnaire on 20 customers (data excluded). The values of Cronbach’s α for the knowledge, attitude, and practice section were 0.76, 0.79, and 0.79, respectively, indicating an acceptable level of reliability.

As of 2018, there are more than 0.45 million community pharmacies in China, which are categorized into large size (≥100 m2), medium size (50–100 m2), and small size (<50 m2). However, the large pharmacies were chosen as the survey field in this study due to their large client base (more than 500 customers per day). The information about community pharmacies and customer flow was obtained from official websites of local government [33,34,35]. With consideration of the density of the city’s population and survey operability, five large community pharmacies were selected from different main urban districts in each city eventually. The customers visiting these community pharmacies were recruited by the systematic random method (every 5th participant was selected) upon their entry to the pharmacy. Once they consented, they were interviewed by data collectors. Moreover, the participants having age less than 18 years and those who were buying cosmetics were excluded.

Trained data collectors were used to collect data. They were briefed about the aims and objectives of the study by the principal investigator. They approached pharmacy customers in three cities and administered the questionnaire. To maintain the quality and integrity of the data, a leader of the team visited different data collection sites randomly. Each questionnaire was double-checked to confirm whether the respondents have answered all of the survey items.

The descriptive statistical analysis was carried to determine the frequencies and percentages of the data. Kolmogorov–Smirnov and Shapiro–Wilks tests were carried out to check the normality. Median knowledge, attitude, and practice scores were calculated, which were compared with the demographic variable by using Kruskal–Wallis and Mann–Whitney U tests. A p-value of less than 0.05 was considered to be statistically significant. Moreover, the relationship between scores of knowledge, attitude, and practices was evaluated using Spearman’s rank correlation test (p < 0.01). All statistical analyses were conducted using SPSS v.16.

2.5. Ethics Approval and Consent to Participate

Out of the total, one thousand and eight hundred customers in different cities who were visiting the community pharmacies to purchase medicine participated in this survey, including 58.8% (n = 1059) males and 41.2% (n = 741) females (Table 1). The proportion of participants of 26–35 years old (586, 32.6%) was larger than other age groups. Most of the customers (1201, 66.7%) had a college degree, and had a monthly income of 3000–8000 RMB (55.4% 998). Nearly half of the customers (44.1%) purchased antibiotics without a prescription pertaining to this visit. The customers purchased most of the antibiotics for themselves (63.0%). Figure 1 shows the purpose of all customers visiting the pharmacies.

3.4. Association of Median Scores of Participants with Demographic Variables

Table 5 illustrates the relationship between median scores with demographic variables. The knowledge scores of different ages, education, income, and employment have significant differences (p < 0.05). Moreover, the median attitude score was significantly associated with gender, age, education, and employment. However, the practice scores were not significantly associated with demographic variables.
The correlation analysis revealed a positive correlation between knowledge, attitude, and practice, which means knowledge affects attitude and practice. Additionally, the attitude has also an influence on practice (Table 6).

An inadequate level of knowledge about antibiotics was found among Chinese pharmacy consumers. Moreover, their attitudes and practices toward antibiotic use were not good in several aspects. The government should take some measures or interventions, including mass level education, about the appropriate use of antibiotics to improve the knowledge and rational use of antibiotics among the public.

The following are available online at https://0-www-mdpi-com.brum.beds.ac.uk/2079-6382/9/4/184/s1, Supplementary Files: Knowledge, attitude and practices of pharmacy customers about antibiotics

We would like to thank all of the participants in this study. 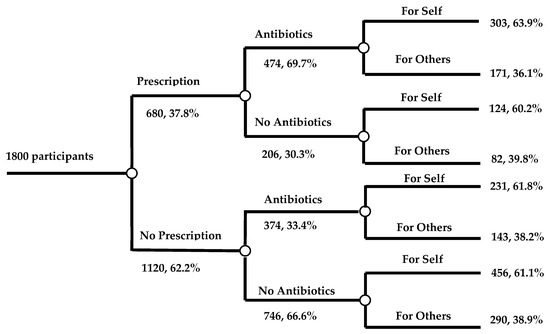 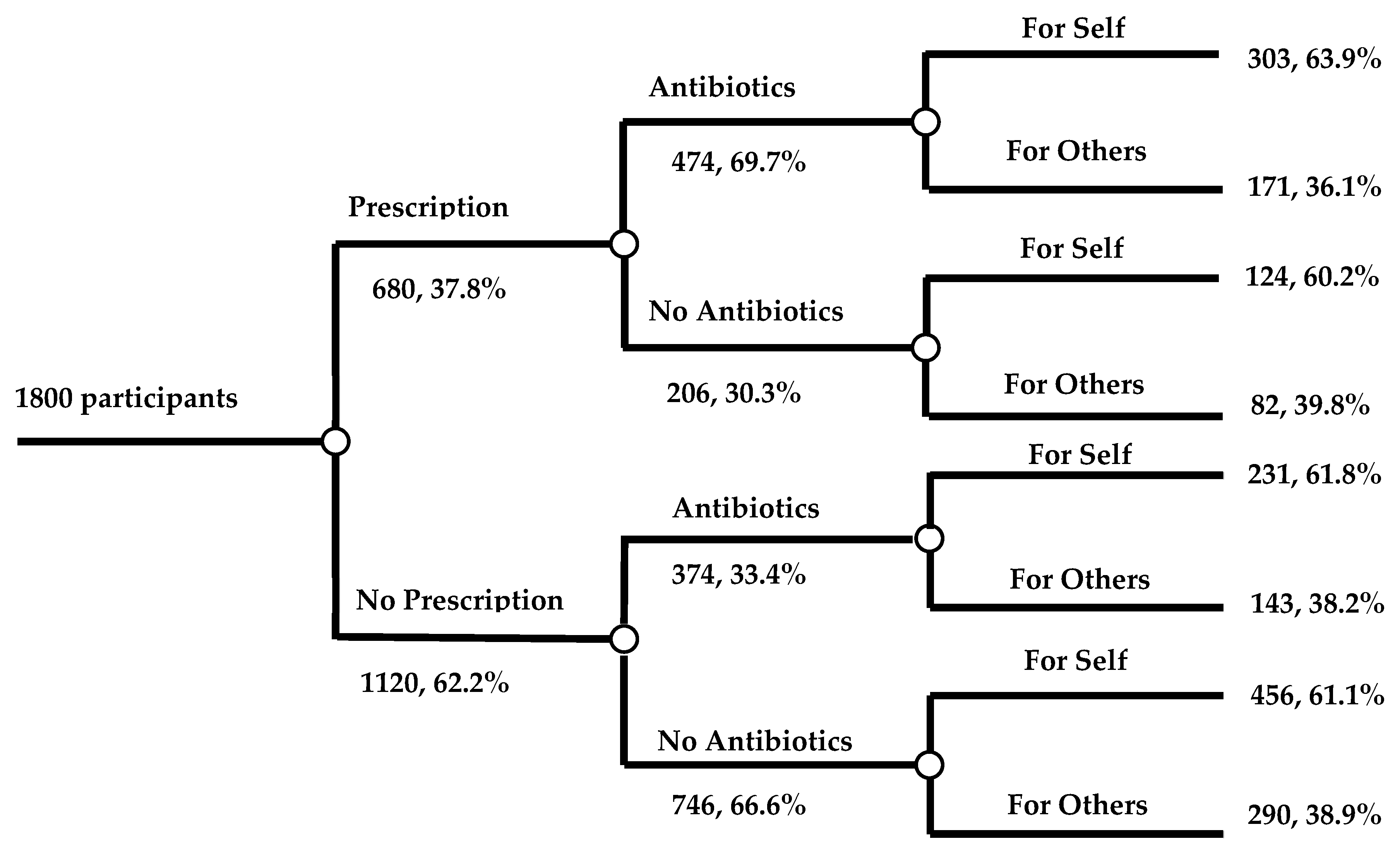