Chlamydial infections have been associated with a variety of diseases in pigs [1], including conjunctivitis [2,3], pneumonia [4], enteritis [5,6], and polyarthritis [7]. Additionally, Chlamydia spp. can cause a wide range of reproductive disorders such as abortions [8], perinatal mortality [9], vaginal discharge, repeated breeding [10,11], as well as poor reproductive performances in sows [12]. Chlamydia (C.) suis is the most prevalent chlamydial species in pigs [1,13]. The diagnosis of Chlamydiaceae infections, in particular, antibiotic susceptibility testing, is time-consuming and laborious due to their obligate intracellular nature. For diagnosing chlamydial infections in veterinary medicine, open questions containing the sampling type and timing, depend on the animal host species, clinical signs, or anatomical localization to test. Moreover, only few laboratories can offer the cultivation of these bacteria, restricting diagnosis to molecular methods, and thus any statement regarding their growth characteristics, virulence, and antibiotic resistance patterns will be missing [14]. Detecting evidence for the involvement of C. suis in the pathogenesis of fertility problems in sows is especially challenging. Therefore, C. suis infections are often diagnosed clinically following the exclusion of other well-known pathogens, but without the detection of C. suis using either nucleic acid amplification tests (NAATs) or serological methods, and without the identification of chlamydial inclusions using immunohistochemical or immunofluorescence staining [15]. Cultivation of these obligate intracellular bacteria is very laborious and expensive. Consequently, antibiotic susceptibility testing, which requires cell culture systems, is not performed on a routine basis.
Following the diagnosis of chlamydial infections in veterinary medicine, in the absence of an effective anti-C. suis vaccine, tetracyclines are usually the treatment of choice [15]. Tetracyclines are easy to apply via food or water. They are not on the WHO list of critically important antimicrobials [16] in contrast to macrolides, which are the treatment of choice in human chlamydial infections. In pigs, this could be a cause for concern considering that C. suis is the only chlamydial species known to have naturally acquired genes that encode tetracycline resistance [17,18]. Moreover, there is evidence for intra- and interspecies recombination upon co-infection in vitro such as tetA(C) transfer among C. suis isolates, as well as from C. suis to C. trachomatis [19,20]. All of these factors might have severe consequences for human health, considering that both C. suis and C. trachomatis DNA have been detected simultaneously in the eyes of trachoma patients in Nepal. Moreover, C. suis was isolated from ocular and rectal samples originating from slaughterhouse workers and pig farmers [20,21,22,23]. The use of sub-inhibitory concentrations of tetracycline, especially in the presence of tetracycline-resistant C. suis isolates, could lead to treatment failure and the selection of tetracycline resistance on herd-level with the potential recurrence of clinical signs [24,25]. However, despite the evidence for C. suis tetracycline resistance, the treatment of chlamydiosis in pigs is still limited to tetracyclines [15].

We detected genetically diverse C. suis isolates in the herd described in this case report. Genetic diversity is consistent with previous studies [38,39,40], depicting the unprecedented diversity of the C. suis genome compared to other chlamydial species, which is strongly influenced by recombination and plasmid exchange. A broad diversity of isolates circulates within Europe, even within individual farms or within the same animal [39]. Together with studies from the USA, Switzerland, Japan, and China, this present case report on Austrian fattening pigs further illustrates a consistent diversity on a global level rather than regional clustering, even though C. suis is genetically quite diverse. This diversity has also been observed for other veterinary chlamydial species such as C. pecorum and C. psittaci [30,39,40].
While C. suis DNA was detected in the uterus of a slaughtered sow, fecal contamination during the slaughtering process could not be excluded. Difficulties in detecting Chlamydia in sows with reproductive failure are a common issue for veterinarians, who often decide to treat the sows with antibiotics regardless of the molecular findings, a strategy that was also employed in this case.
The ocular C. suis isolates were not only genetically different but also either resistant or sensitive to tetracyclines. Interestingly, both tetracycline sensitive and resistant isolates were isolated from animals that lived in the same pen, and were therefore in regular physical contact with each other during the study period, which coincides with the findings of a study investigating Swiss fattening pigs [36,39]. It could be hypothesized that resistance originates from the continued short-time application of oxytetracycline in sows at the time of insemination. The necessity of antimicrobial treatment as performed here, especially before valid susceptibility testing, is questionable, and should be viewed critically. However, it is performed in many herds where Chlamydia spp. are suspected to be involved in the fertility problems and are often the only possible choice due to the lack of anti-C. suis vaccines on the market.
A striking observation was the fact that both tetA(C)-positive isolates (329 MS and 494 MS) were tetracycline-resistant, but they only displayed decreased susceptibility to doxycycline in vitro compared to the two tetA(C)-negative, tetracycline and doxycycline sensitive isolates (330 MS and 490 MS). These findings stand in contrast to published results of Di Francesco et al., who concluded that the presence of a tetA(C)-containing genomic island is linked to both tetracycline and doxycycline resistance, but the findings are in line with another study from Germany [41]. The contrasting resistance in these two antibiotics could be explained by differences in terms of pharmacodynamics and pharmacokinetics between tetracyclines as a natural tetracycline, and doxycycline as a synthetic tetracycline [42]. The regular use of oxytetracycline, which is closer related to tetracycline than to doxycycline, in this herd over years could be a possible explanation for the differences in resistance between tetracycline and doxycycline. However, further studies are needed to investigate this phenomenon.
To estimate the resistance situation for Chlamydia, i.e., to confirm tetracycline resistance in C. suis, isolation and antibiotic susceptibility testing must be performed in addition to the detection of the tetA(C) gene by PCR, as there can be discrepancies between tetA(C) PCR results of clinical swab samples and in vitro testing for tetracycline resistance [36]. In this study, however, such discrepancies were not observed, giving a clear indication that the identified tetA(C) gene was part of C. suis and did not originate from another bacterial species.
As a final conclusion to this study, we propose to establish chlamydial cultivation as part of routine diagnostics in pigs for three reasons: First, infections with TcR C. suis isolates in the pork industry are rising [43,44,45,46], which could complicate the treatment of porcine chlamydiosis, and might even pose a threat for public health considering that transmission of C. suis to humans has been reported [36]. Second, TcR isolates cannot be conclusively identified without cultivation, because, while current molecular techniques may identify the tetA(C) gene, they cannot determine whether it originates from C. suis or another bacterial species. Finally, taking together the increasing number of TcR C. suis isolates and the inability to characterize them outside of in vitro assays, it is crucial to establish routine cultivation procedures in order to predict the clinical impact that TcR C. suis isolates may have on porcine health, a highly relevant question that has gained little attention so far, apart from case studies [44].

Open Access Funding by the University of Veterinary Medicine Vienna. This research received no external funding.

The authors thank the responsible farm veterinarian and the farmer for the excellent cooperation in this case. We thank Theresa Pesch and Barbara Prähauser from the Institute of Veterinary Pathology, University of Zurich, for technical help. 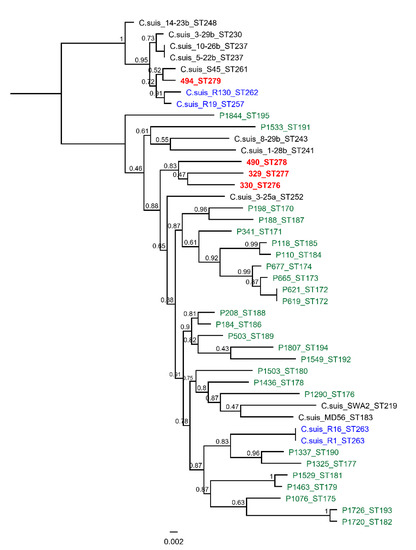 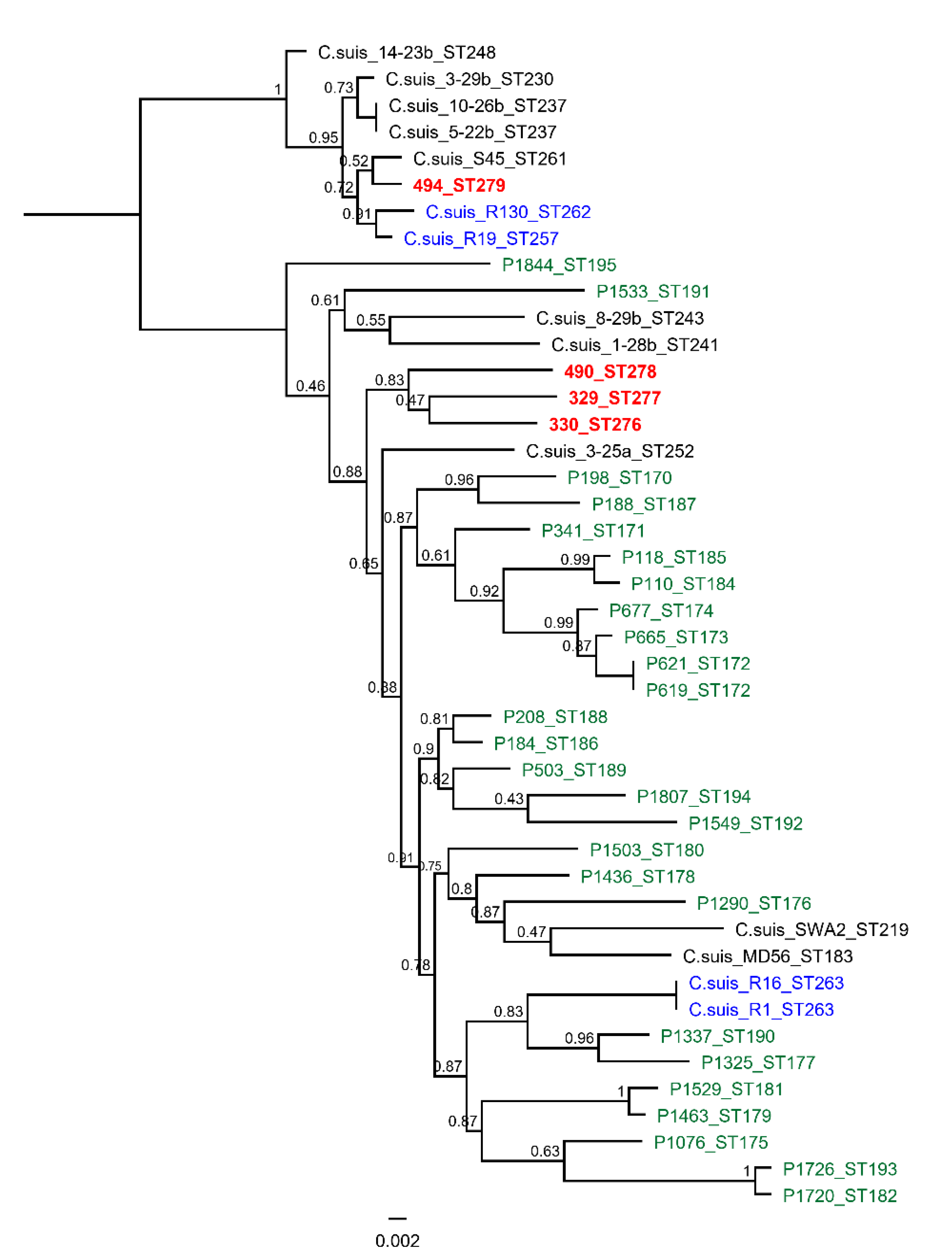