Excess Length of Acute Inpatient Stay Attributable to Acquisition of Hospital-Onset Gram-Negative Bloodstream Infection with and without Antibiotic Resistance: A Multistate Model Analysis

Despite several Food and Drug Administration (FDA) safety alerts since 2008, fluoroquinolones remain the third most commonly prescribed class of antibiotics in the United States [1]. Fluoroquinolones are attractive antimicrobial options for certain indications due to their broad spectrum of activity and high bioavailability of oral formulations [2,3,4]. Resistance to fluoroquinolones among Enterobacteriaceae and non-fermenters (bacteria that cannot catabolize glucose, such as Pseudomonas aeruginosa and Acinetobacter baumannii) is well described, and may pose increased risk of mortality and significant burden to the healthcare system [5,6]. Furthermore, elevated fluoroquinolone minimum inhibitory concentration (MIC) values among Gram-negative isolates have been associated with poor clinical outcomes, such as longer duration of hospital stay and treatment failures, despite meeting the definition for susceptibility [7,8].
In 2015, the United States Committee on Antimicrobial Susceptibility Testing (USCAST) proposed lowering the ciprofloxacin MIC breakpoint value for Enterobacteriaceae to ≤0.25 mcg/mL and for non-fermenters to ≤0.5 mcg/mL. At the time, the Clinical Laboratory Standards Institute (CLSI) and the FDA endorsed a ciprofloxacin MIC breakpoint value for Enterobacteriaceae and non-fermenters of ≤1 mcg/mL. This proposed reappraisal in the MIC breakpoint followed an acknowledgment of a trend of declining susceptibility among Enterobacteriaceae to fluoroquinolones. Specifically, the susceptibility of Enterobacteriaceae to ciprofloxacin declined from 95.2% to 81.1% between 1998 and 2013. The committee noted that the same declining trend in ciprofloxacin susceptibility was not demonstrated among P. aeruginosa isolates, with relatively consistent susceptibility rates since drug approval of approximately 70%. Further evidence to support the reappraisal in MIC breakpoint values was provided by pharmacokinetic-pharmacodynamic (PK-PD) target attainment analyses conducted by USCAST. Among Enterobacteriaceae, the probability of PK-PD target attainment (defined as 1 log10 CFU reduction from baseline) with the ciprofloxacin 400 mg intravenously every 8 h regimen was 99.4% and 82.3% for organisms with MIC values of 0.25 and 0.5 mcg/mL, respectively. Among P. aeruginosa isolates, the probability of PK-PD target attainment with this ciprofloxacin regimen was 97.2% and 61.9% for organisms with the MIC values of 0.5 and 1 mcg/mL, respectively [9].
In response to this evidence, the CLSI and FDA updated the MIC breakpoint values and associated interpretive criteria for Enterobacteriaceae and non-fermenters in January 2019 to align with the USCAST recommendation. This study aims to characterize the impact of reappraisal of MIC breakpoint values on ciprofloxacin susceptibility among Gram-negative bloodstream isolates [10,11].

A total of 1055 Gram-negative bloodstream isolates were identified over the five year study period, including 967 (92%) Enterobacteriaceae and 88 (8%) non-fermenters. Escherichia coli was the most common organism identified (51%), followed by Klebsiella spp (19%). The most common non-fermenter identified was Pseudomonas aeruginosa, which comprised 73% of the group and 6% overall (Figure 1).

2.3. Impact of Reappraisal of MIC Values among Patients with Resistance Risk Factors

Among patients with bloodstream infections due to Enterobacteriaceae, those with certain risk factors for fluoroquinolone resistance had a significant decline in ciprofloxacin susceptibility with a reappraisal of the MIC breakpoints (Table 2 and Figure 3) The largest impact was demonstrated among patients with fluoroquinolone use within the previous 90 days, followed by residence in a skilled nursing facility. Risk factors that did not have a statistically significant impact on the mean difference in ciprofloxacin susceptibility were recent outpatient procedures and fluoroquinolone use within the prior 90–180 days. Patients without fluoroquinolone resistance risk factors experienced a statistically significant decline in ciprofloxacin susceptibility, although to a lesser extent when compared to the entire population with bloodstream infections caused by Enterobactriaceae (3.8% vs. 5.2%).

3.1. Impact of Reappraisal of MIC Breakpoints

It is imperative to deploy systematic adoption of these updated MIC breakpoint values in order to positively impact patient care. This effort, as any effort in response to updated interpretive values or other laboratory standards, should involve key microbiology laboratory personnel, members of the antimicrobial stewardship program, specialized clinicians, information technologists, and administration. Without an organized effort to educate and update technology to reflect updated breakpoints, the impact of the reappraisal of MIC breakpoint values for Enterobacteriaceae and non-fermenters may not reach the level of patient care due to the reliance of prescribers on the interpretive values assigned in the microbiology reports. Barriers to systematic adoption may include lack of easily modifiable electronic infrastructure, lack of intangible resources (i.e., time), and perceived unimportance. Findings such as those described in this study should help support the importance of an urgent effort to adopt the reappraisal of MIC breakpoints. In the absence of an organized effort to adopt the updated MIC breakpoints, specialized clinicians must be vigilant to educate prescribers on the updates and provide context to the associated interpretive values. Members of the antimicrobial stewardship team are well-positioned to educate prescribers at general and patient-specific levels.

The large sample size of Enterobacteriaceae bloodstream isolates represents the major strength in this study. Examining the change in fluoroquinolone susceptibilities by the presence of major risk factors for resistance adds novelty to this work. The study also has limitations. First, data were derived from two community hospitals within the same healthcare system and geographical area. This may limit generalizability to other settings with different hospital epidemiology and antimicrobial resistance rates. Second, recent studies have demonstrated a decline in fluoroquinolone use after the FDA safety warnings [21]. This decline in prescription rates may influence fluoroquinolone resistance rates in the future.

This study took place at Prisma Health Richland and Prisma Health Baptist hospitals (formerly Palmetto Health). Combined, these hospitals are comprised of 1100 beds and provide a variety of medical, surgical, and subspecialty services to patients mostly residing in the Midlands region of South Carolina.

Descriptive statistics were used to characterize microbiology and the MIC distributions. Matched pairs mean difference (MD) with 95% confidence intervals was calculated to examine the change in ciprofloxacin susceptibility after the reappraisal.

Reappraisal of MIC susceptibility breakpoint values for Enterobacteriaceae and non-fermenters has a variable impact on the interpretive designation for ciprofloxacin susceptibility. P. aeruginosa is the most impacted organism, and patients with fluoroquinolone use within the previous 90 days are the most impacted risk factor group. Our data also indicate a possible benefit from an antimicrobial stewardship perspective in nursing home residents or those who have had recent fluoroquinolone exposure. Timely implementation of new fluoroquinolone susceptibility breakpoints by local microbiology laboratories and healthcare systems is crucial for the optimization of antimicrobial therapy in patients with bloodstream and other serious infections.

The authors thank Prisma Health-Midlands Antimicrobial Stewardship and Support Team and Microbiology Laboratory in South Carolina, USA, for their help in facilitating the conduct of the study.

J.A.J.: Speaker’s Bureau, bioMérieux; All other authors report no potential conflicts of interest. 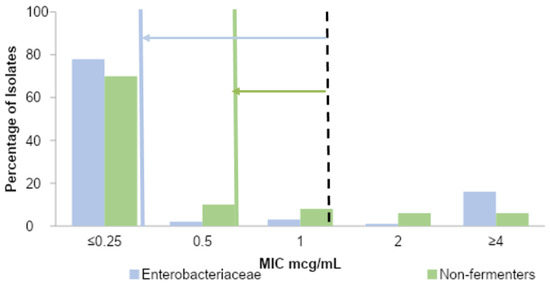 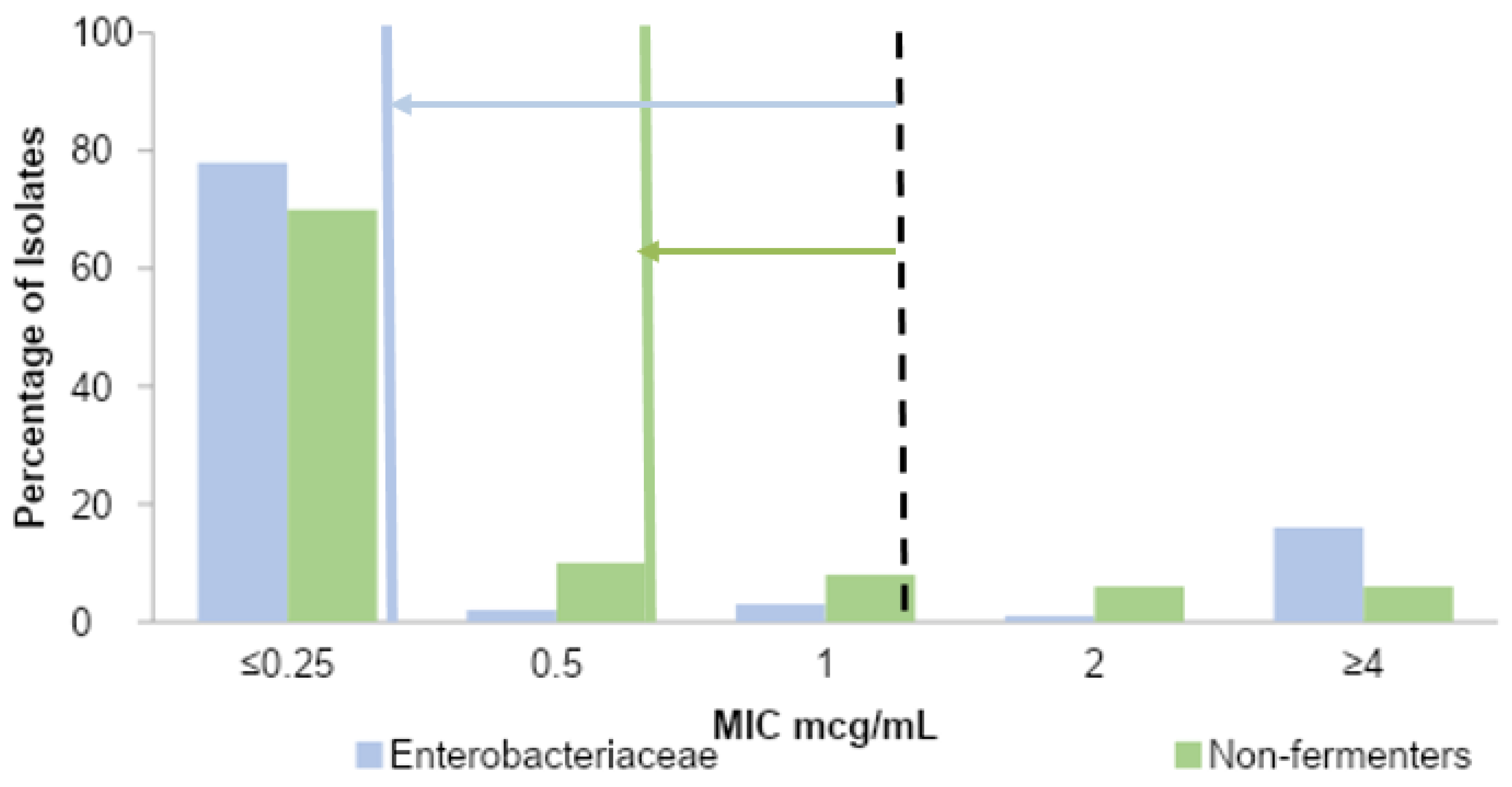 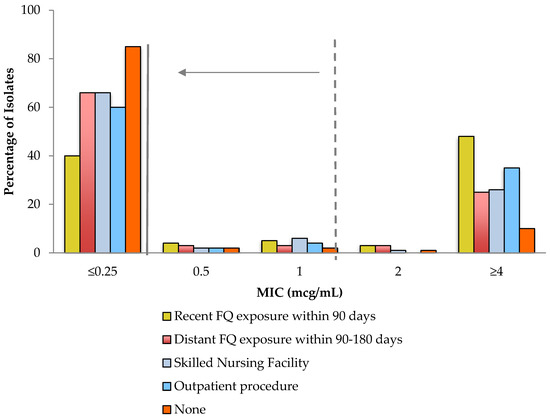 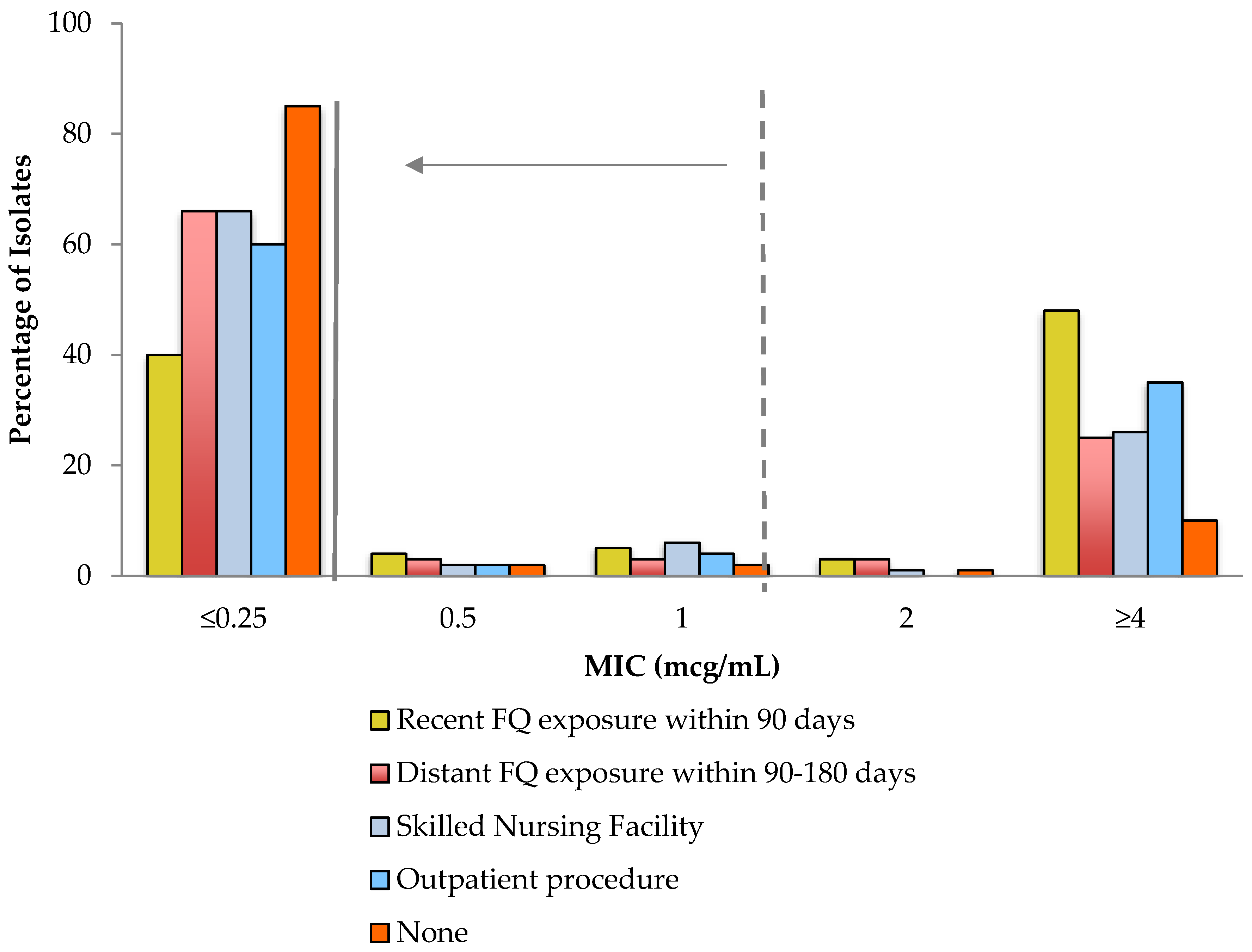