Pharmacokinetics of Macrolide Antibiotics and Transport into the Interstitial Fluid: Comparison among Erythromycin, Clarithromycin, and Azithromycin

Hyponatremia associated with low-dose trimethoprim in patients on concomitant systemic corticosteroid therapy has rarely been reported. Here, we describe a 57-year-old woman with a history of diabetes mellitus and hypertension treated with telmisartan, who presented with progressive visual impairment of the left eye due to anti-aquaporin-4 antibody-positive optic neuritis. The patient received pulsed intravenous methylprednisolone followed by oral prednisolone at 30 mg/day and trimethoprim–sulfamethoxazole prophylaxis (160 mg and 800 mg daily). Her serum sodium level steadily decreased, and the potassium level was slightly elevated despite well-preserved renal function. This state persisted even after telmisartan discontinuation. In addition to hypotonic hyponatremia (125 mEq/L) with natriuresis, hyperkalemic renal tubular acidosis was diagnosed based on normal anion gap metabolic acidosis and hyperkalemia with low urinary potassium excretion. After trimethoprim–sulfamethoxazole cessation, electrolytes and acid–base imbalances swiftly recovered. We can conclude that caution must be exercised when treating such patients, because even low-dose trimethoprim may cause hyponatremia concomitant with hyperkalemic renal tubular acidosis, despite the mineralocorticoid effects of systemic corticosteroids.
Keywords: acidosis; aquaporin 4; hyperkalemia; hyponatremia; steroids; trimethoprim acidosis; aquaporin 4; hyperkalemia; hyponatremia; steroids; trimethoprim

Trimethoprim has broad-spectrum antibacterial activity by inhibiting dihydrofolate reductase to prevent microbial growth [1]. As a result of a synergistic effect, it is frequently used in combination with sulfamethoxazole for the treatment of respiratory, intestinal, cutaneous, and urinary tract infectious disease [1]. While trimethoprim–sulfamethoxazole is generally well-tolerated, its use is sometimes associated with diverse adverse effects on the neurologic, hematologic, cutaneous, reproductive, and renal systems [2]. Trimethoprim can elicit hyponatremia and hyperkalemic renal tubular acidosis (RTA) due to its structural similarity with amiloride [3,4,5]. Hyperkalemia is the most common manifestation of electrolyte/acid-base impairments, and it is potentially life-threatening [4]. Hyponatremia related to high-dose trimethoprim is also common, but low-dose trimethoprim rarely leads to hyponatremia in patients with preserved renal function [3,6]. The main countermeasure for these adverse events is the immediate discontinuation of trimethoprim and associated medications.
While the amiloride-like effect of trimethoprim is to inhibit epithelial sodium channels in the collecting tubule, mineralocorticoids positively regulate and increase renal sodium reabsorption; thus, patients with hyperkalemic RTA are sometimes treated with the mineralocorticoid agonist fludrocortisone [5]. A previous study has reported that concomitant corticosteroid therapy did not influence the incidence of hyponatremia associated with high-dose trimethoprim [3]. However, there is scant information on hyponatremia in patients using low-dose trimethoprim and concomitant corticosteroid. Herein, we describe a patient with no renal dysfunction who nonetheless exhibited hyponatremia related to prophylactic low-dose trimethoprim despite receiving systemic corticosteroid equivalent to a mineralocorticoid effect of 0.06 mg/day fludrocortisone.

A 57-year-old woman with a history of aquaporin-4 (AQP4) antibody-positive optic neuritis presented with progressive visual impairment of the left eye over two days and was admitted for further evaluation and treatment. The patient had been diagnosed with anti-AQP4 antibody-positive optic neuritis two years earlier due to visual impairment of the right eye. However, no medical treatment had been initiated at that time due to the patient’s refusal. On watchful waiting, her visual symptoms had not deteriorated notably until her admission here. Her medical history also included hypertension and diabetes mellitus diagnosed at 47 years of age. The patient had developed diabetic polyneuropathy and proliferative diabetic retinopathy for which pan-retinal photocoagulation was given, but nephropathy had not emerged as a complication. Glycated hemoglobin on admission was 8.0%; at this time, medication consisted of 36 units of insulin glargine U-300 once-daily, anagliptin 200 mg/day, and metformin 500 mg/day. Hypertension was treated with telmisartan monotherapy at 40 mg/day alone and was satisfactorily controlled. The patient drank alcohol only socially and never smoked.
On physical examination, the patient’s body mass index was 20.9 kg/m2 (height 153 cm, weight 49.0 kg), body temperature was 36.1 °C, blood pressure was 107/55 mmHg, and pulse was regular at 86 beats/min. While Goldman perimeter testing revealed a newly developed central visual field defect in the left eye, the status of the diabetic retinopathy was not markedly changed. A bilaterally weakened Achilles tendon reflex and impaired vibration sensation over the medial malleolus was observed. Laboratory parameters on admission (Table 1) showed unremarkable electrolytes, preserved estimated glomerular filtration rate, and normo-albuminuria.
The clinical course of hospitalization is shown in Figure 1. From the fourth hospital day, the patient received pulsed intravenous methylprednisolone 1000 mg/day for three consecutive days, followed by oral prednisolone 30 mg/day. Additionally, low-dose trimethoprim–sulfamethoxazole prophylaxis (160 mg and 800 mg daily) was concomitantly administered. Subsequently, the serum sodium level steadily decreased, and the potassium level was slightly elevated despite normal renal function. A second course of pulsed methylprednisolone was given on days 13–15. Telmisartan was stopped on day 16, but electrolyte abnormalities did not improve. Therefore, on day 21, arterial blood gas analysis, urinalysis, and hormonal status tests were carried out in addition to routine examinations and body weight measurements (Table 2). Hypotonic hyponatremia with high urinary sodium excretion and mild hyperkalemia with low urinary potassium excretion were observed. While primary respiratory alkalosis was present, decreased bicarbonate levels greater than compensatory changes and negative base excess indicated the co-existence of primary metabolic acidosis. Based on the above findings and on the normal serum anion gap, the patient was diagnosed as having hyperkalemic RTA. After the discontinuation of trimethoprim–sulfamethoxazole, electrolytes and acid–base imbalances swiftly resolved. Visual impairment also improved and did not recur during prednisolone tapering, and the patient could be discharged on hospitalization day 29.

Hyponatremia concomitant with hyperkalemic RTA associated with trimethoprim can occur despite using only low doses of the drug, and even when combined with systemic corticosteroids with a mineralocorticoid effect. Diabetes mellitus and renin–angiotensin–aldosterone blockade may be exacerbating factors. Therefore, careful monitoring during trimethoprim therapy should be undertaken in patients with these risks. 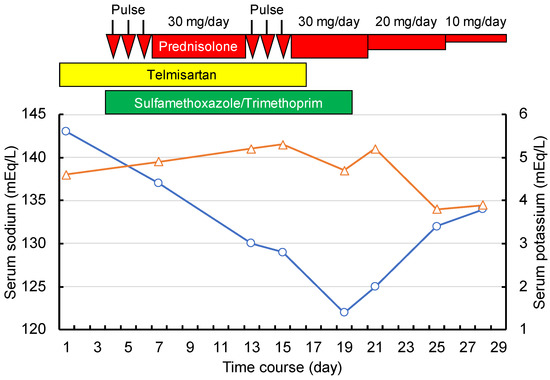 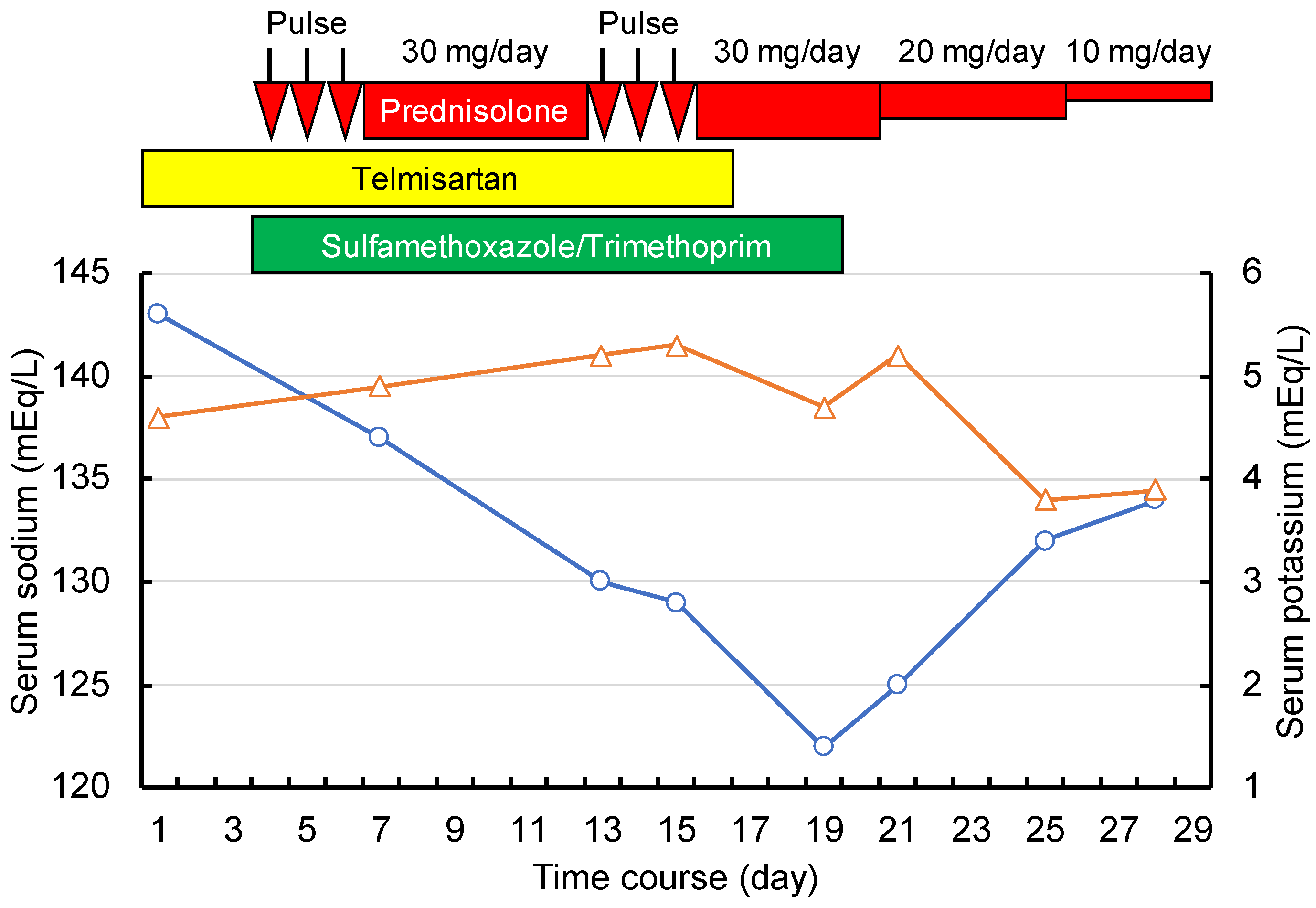 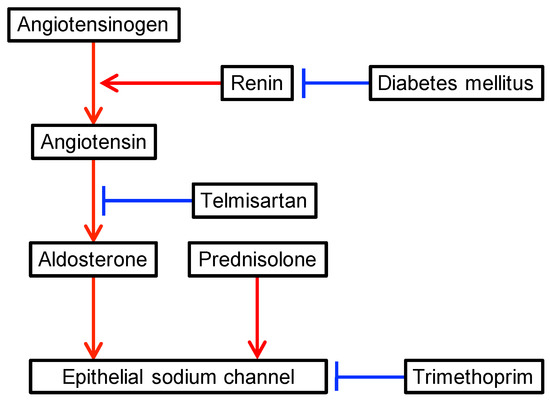 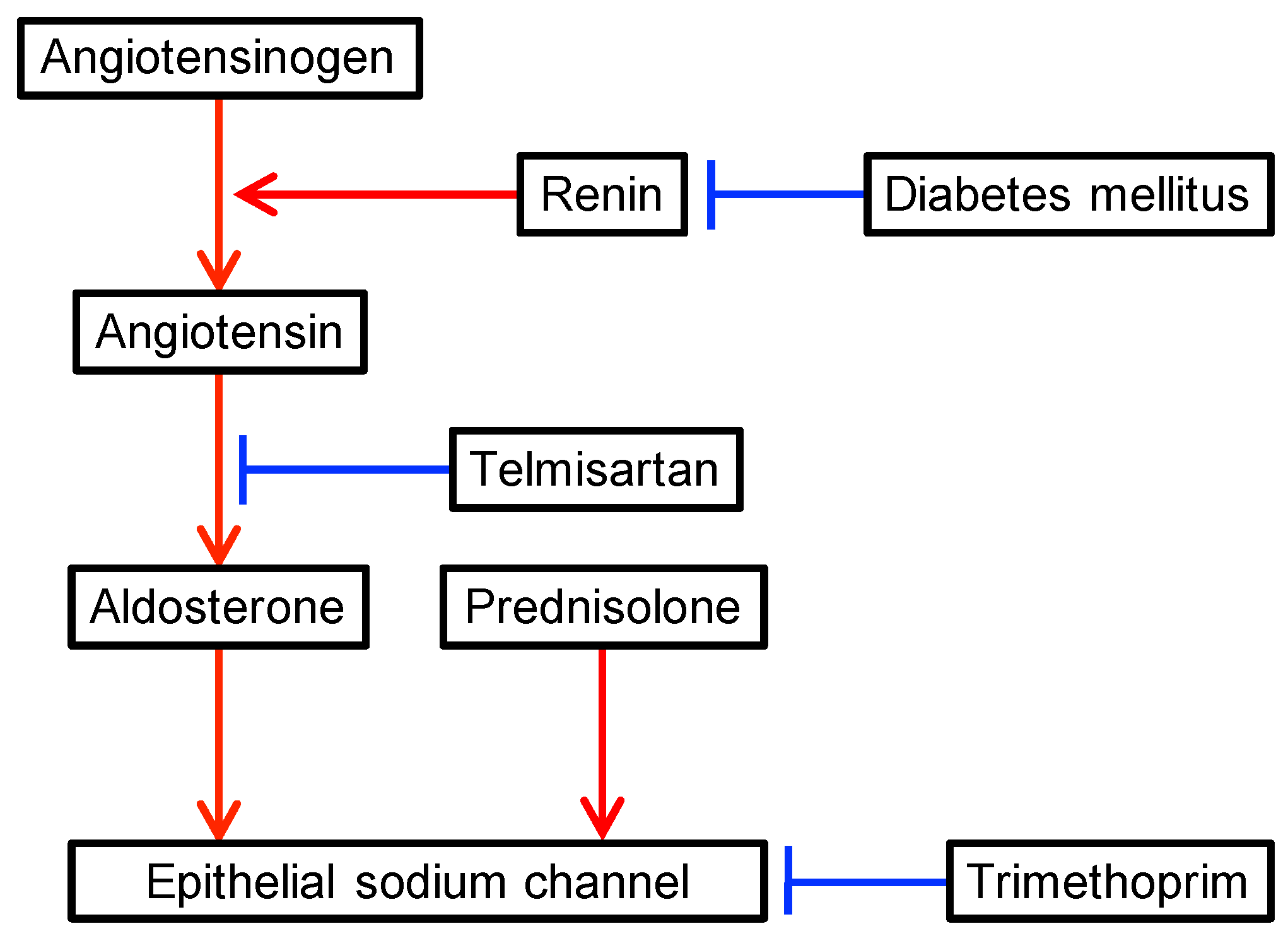